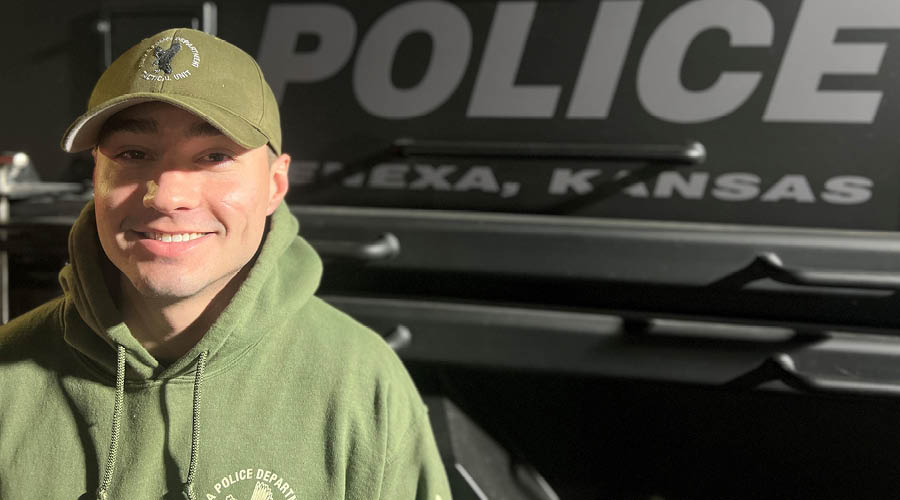 Lenexa police officer Hunter Tschippert stands in front of the police department’s armored vehicle during tactical unit training where he serves as a tactical team operator.

Watching the 9/11 terrorist attacks unfold on national television was the moment Hunter Tschippert decided he wanted to become a police officer. He was 5 years old.

“Being in kindergarten and seeing the second plane hit was what pushed me toward the line of work to begin with,” he said. “Since then, this is the career path I knew I wanted to go into.”

It wasn’t until Tschippert got older that he really understood what happened that day. But watching emergency responders moving toward the crisis is what made him feel called to the line of duty.

“Everyone running away from a situation, which is the natural, human instinct to survive and to avoid some traumatic or dangerous event,” he said. “But the people running toward it and putting themselves — their own life — behind strangers, is something that really impacted me.”

Throughout his life, Tschippert has found ways to put others before himself and he wanted a job that required that.

“I’ve always found myself happier when other people around me are happy,” he said. “In middle school and high school, I worked with lots of special needs groups that we had. One of my best friends has a special needs brother. I grew up around him and some people look down on them even if they’re not trying to. Just because it’s usually something they don’t understand. I would go work with the kids who — if there weren’t programs like that — wouldn’t have people to interact with and really feel like they’re not normal.”

Internship that led to a full-time position with the department

Growing up in Johnson County, Tschippert was familiar with the City of Lenexa. He knew once he graduated from the University of Oklahoma that he wanted to come back. Through his internship with the Lenexa Police Department in 2017, he had a clear career path.

“The internship gave me a solid foundation for the day-to-day operations of a police department,” Tschippert said. “It allowed me to communicate with officers in a more personal manner and develop relationships prior to applying to be a police officer. Having personal relationships with officers prior to my first day was extremely beneficial in becoming comfortable and confident as an officer.”

Tschippert became a full-time patrol officer in 2018 and has since become a tactical team operator and a field training officer.

“In policing, teamwork is essential for success, and the Lenexa Police Department works together better than any other organization,” he said. “You always have someone who has your back and is willing to help however they can.”

While Tschippert and most officers are used to thinking about others more than themselves, life happens, and when it does, staff are encouraged to self-care.

“Taking care of yourself and your own mental health, I would say Lenexa is more advanced than most departments because how seriously they take it,” he said. “The department encourages openness and if you’re dealing with something, don’t try and sit there and deal with it yourself. If it’s something you need to talk with somebody, or maybe you need a few days off to kind of get back in the right mindset, that’s not a problem.”

Responding to the call of service

Every life experience helps shape people and, in Tschippert’s case, it gave him a sense of responding to the call of service.

“Usually when we go to a call, it’s someone having their worst day, the worst moment of their life type of situation,” he said. “I think [working with special needs kids] gave me a slight grasp of helping people on their worst day or helping those who can’t physically help themselves. I think it gave me, on a small scale, what law enforcement does on a routine basis. And a lot of times you don’t even think about it.”

But every call is unique and affects officers differently.

“We’re all expected to handle whatever call we get sent to, which in reality, is a very high expectation, but nonetheless, the expectation is placed on us,” Tschippert said. “Here in Lenexa, we’re good at jumping in and if I need to take over because I can tell that you’re getting a little too emotionally involved. That’s something we’re all trained to do.”

Constant training keeps Tschippert and other police officers disciplined. Training is encouraged and expected, even if that means traveling out of state to attend a conference. On average, a Lenexa police officer receives more than 150+ hours of law enforcement training annually, while the state requirement is only 40 hours.

“I think that’s something that kind of puts our officers above and beyond most other departments,” Tschippert said. “You can go to a training, come back, and you’re teaching your sergeant, or your corporal. You’re teaching them because every officer brings something different to the department, and going to those trainings and bringing it back is an important aspect of trainings. Everyone here wants you to succeed.”

Policing is going beyond getting the job done each shift. Educating the community is as important.

“Lenexa puts on a lot of programs like the Use of Force seminar that explains why we do the things that we do,” Tschippert said. “The backstory of critical incidents, why they happen, what actually happened. I am glad that Lenexa does that. It’s a very transparent organization which is why I think we have such a good relationship with our community.”

Serving a community that supports him is what keeps Tschippert going.

“I wouldn’t want to work for any other department in Johnson County,” he said. “It is a blessing to come to work every day and know those you are serving are behind you.”

Outside of work, Tschippert enjoys cheering on the Oklahoma Sooners football team, watching movies with friends and spending time with family.

Ready for your next career move? At the City of Lenexa, you’ll be trained, supported and valued. Build your future with us and use your talents to grow and succeed as a member of our team. Learn about current job opportunities at Lenexa.com/Jobs.