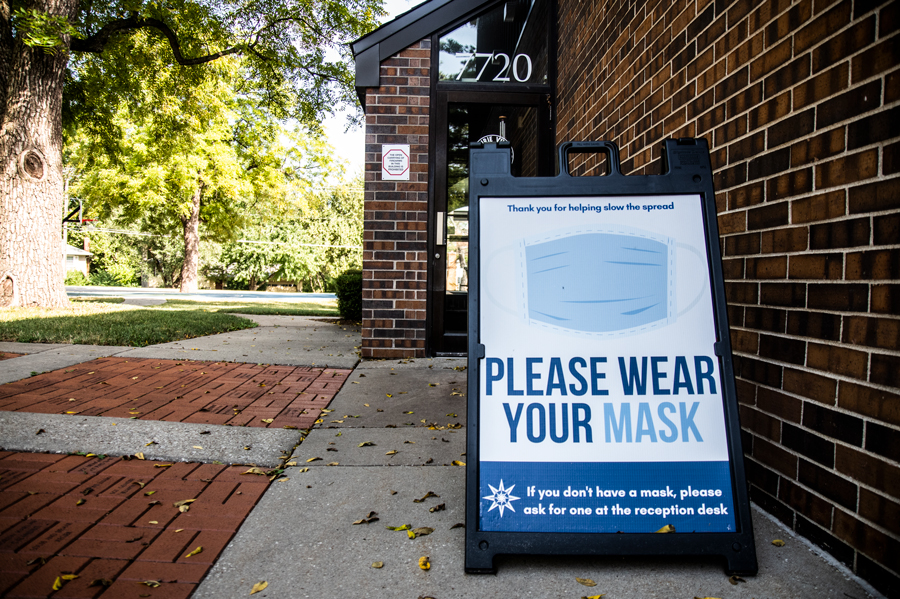 The cities of Prairie Village, Mission and Roeland Park will all impose new citywide mask mandates beginning Tuesday, Jan. 18. Above, signage in Prairie Village outside of Corinth Library during the city's last mask order in fall 2021. File photo.

In response to the growing number of COVID-19 cases in the area, three northeast Johnson County cities — Prairie Village, Mission and Roeland Park — on Wednesday all approved citywide mask mandates.

Sanmi Areola, director of the Johnson County Department of Health and Environment, told the Prairie Village City Council at a special meeting Wednesday that the effort by these cities is appreciated and supported by the county health department.

The department has had to help bring additional ventilators to two health local systems in recent days, Areola said.

AdventHealth Shawnee Mission this week reported 82 COVID-19 patients, compared to 20 patients a couple months ago, which is an unsustainable trajectory, Areola told the council.

“We are at a place that we have cautioned about for a long time,” Areola said. “We are not in a very good place, but we need to take steps so that it doesn’t get worse.”

All three cities’ mask mandates will go into effect on Tuesday, Jan. 18.

In Mission and Prairie Village, businesses will not be required to post signage about the mask mandate but will be required to do so in Roeland Park.

All three cities’ orders put the onus on individuals to wear a mask in all indoor, publicly accessible spaces and don’t require businesses to enforce mandates on their premises.

Individuals to be found in violation could be fined $25.

One version of the ordinance considered in Roeland Park included a $250 fine for businesses, but the city council adopted an alternative ordinance that does not include that penalty.

As with past mask mandates in the Kansas City area, there are a number of exemptions, including:

Private residences, houses of worship and schools, both public and private, are not covered by the new mask orders.

‘For the common good’

Regarding the focus on individuals’ responsibility, Prairie Village Mayor Eric Mikkelson made the analogy to a pizza shop owner realizing a delivery driver doesn’t wear their seatbelt.

Some people choose not to wear a seatbelt even though it’s the law, he said, but the pizza shop owner is not required to turn their employee into the police.

Councilmember Terrence Gallagher said whether or not there is a mask mandate, there are still be people in the community who won’t wear masks.

Gallagher said he supports masks and vaccinations, but he questioned if a mask mandate would make any difference if businesses aren’t required to enforce it.

“Everybody that wants to wear masks, everybody that believes in masks are going to do this,” Gallagher said. “What are we enforcing here? I feel like we’ve got an ordinance here that has no grit or no teeth.”

Councilmember Ron Nelson disagreed. He said while the ordinance isn’t “as strong” as he and others on the governing body would like, action must be taken.

Nelson said more people will wear a mask when there is a requirement. Still, he said the governing body doesn’t determine policy based on whether or not someone will violate the law.

In Mission, much of the discussion centered around the burden on relationships between businesses and customers regarding enforcement, as well as concerns that the mask order could divert Mission Police Department resources from more pressing issues.

“These small business owners have gone through hell in a hand basket trying to keep their businesses going,” said Councilmember Debbie Kring, noting that she supports the burden of enforcement being placed on the city, and not businesses. “And to put another additional onus on them to have to monitor people, I think, is absolutely the wrong way to do business.”

Mission Mayor Sollie Flora and City Administrator Laura Smith said police officers are trained in de-escalation, and the city will work to ensure the mask order is enforced respectfully and doesn’t cause any additional strain on the community.

“I wasn’t acting lightly when bringing this forward,” Flora added.

A legal memo from Roeland Park’s counsel, the Mauer Law Firm, warned of the challenges of enforcing a mask ordinance.

“The Roeland Park Police Department is not fully staffed as of the writing of this memorandum,” the memo says. “Calls from individuals and businesses to respond to masking calls may reduce the operational capacity to respond to other calls.

In a separate memo, Roeland Park Police Chief John Morris urged passage of a resolution over a more formal ordinance, arguing that having to enforce reported mask violations “would take away our role from more serious crime prevention in the city.”

But both cities ultimately passed the ordinances, Mission unanimously and Roeland Park by a 7-1 vote, with Councilmember Tom Madigan voting against it.