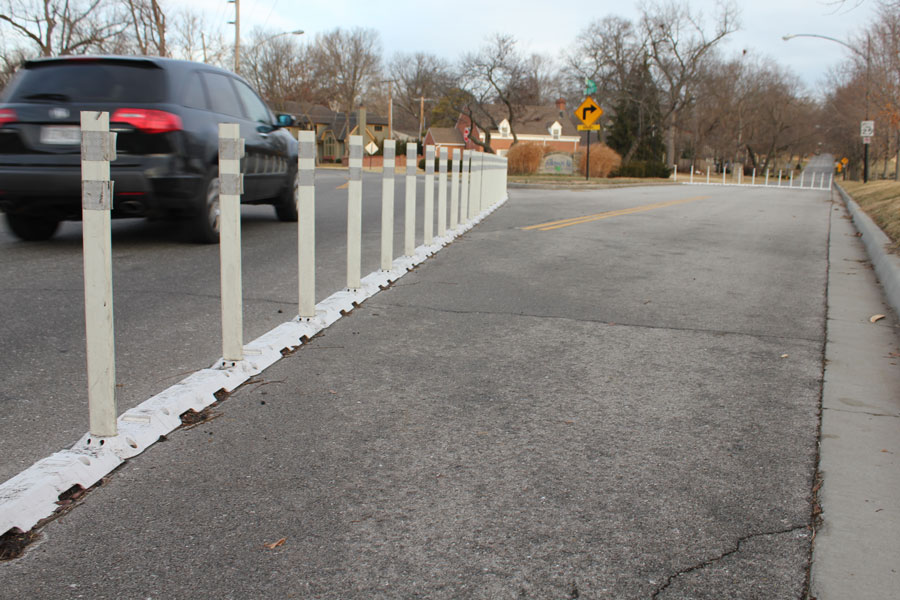 Reconfiguring the traffic island at Belinder and State Park Roads, south of Shawnee Mission Parkway, is estimated to cost about $20,000, but a Fairway resident and contractor is donating his firm's resources to do the work at no cost to the city. Photo credit Kyle Palmer.

The Fairway City Council has unanimously approved a contract with Kansas City-based Superior Bowen to permanently reconfigure the island on Belinder Road at State Park Road.

The city will spend no money on the project because Superior Bowen — whose owner, Matt Bowen, lives on Belinder — is donating its services, which the city said were estimated to be worth $20,000.

Public Works Director Bill Stogsdill said at the time that the traffic calming studies were focused primarily on speed and not on traffic volumes. The intent was to determine what would best slow down traffic, not divert traffic to other areas.

City Administrator Nathan Nogelmeier said the permanent speed humps would not be as jarring as the temporary speed humps were.

The traffic island sits at the angular confluence of Belinder and State Park roads, between the adjacent corners of Mission Hills Country Club and Kansas City Country Club.

Nogelmeier said at Monday’s meeting that the permanent reconfiguration of the traffic island will:

The work is expected to be completed in about two months, Nogelmeier said, but because the project will cost the city no money, it will be flexible with the contractor on timing.

Traffic studies in 2017 through 2019 identified speeding as a problem on Belinder. Three temporary speed humps failed to correct the problem.

Ward 3 Councilmember David Watkins said several cars had been “clocked at well over 60 miles per hour going north up the hill [towards SM Parkway].”

Police Chief J.P. Thurlo confirmed that the traffic-calming measures had “dramatically impacted speeds on Belinder” and that his department had received fewer complaints about speeding.

“I’m in support of it,” Thurlo said. “We’ve seen a reduction in speed, and I think it keeps the neighborhood safer to have those controls.”

Watkins asked who would maintain the reconfigured island.

Nogelmeier said the area’s homeowners association currently maintains it, but because it will include more green space, the public works department will work with the HOA to arrange its maintenance.

Nogelmeier said the city had waited to spend taxpayer money on Belinder island until Mission Hills decides what it will do with the Belinder low water crossing, just across the border with Fairway.

“The wait has been painful at times,” Mayor Melanie Hepperly said. “If we were to move ahead using city taxpayer dollars on something that we did not know what the outcome was going to be from Mission Hills, that would be a waste. That’s not in my nature to do that kind of thing. … We were being patient.”

Fairway said in an email last week that Mission Hills had not shared “any decisions or definitive timeline” for actions regarding the low water crossing.