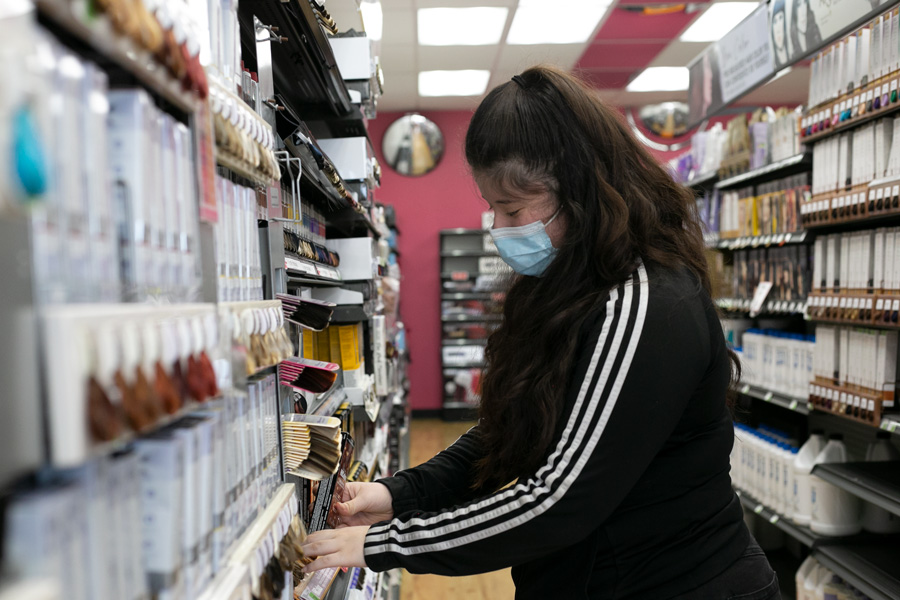 In special city council meetings Wednesday night, Mission, Prairie Village and Roeland Park will consider new citywide mask mandates, as the Omicron variant spurs new cases to record high levels throughout the metro. The cities were the only Johnson County municipalities to institute mask orders during the fall surge of the Delta variant. File image.

Prairie Village and Roeland Park were the only two Johnson County municipalities to put mask orders in place during last fall’s spike fueled by the Delta variant.

It’s not clear if there is enough political appetite in any of these cities to implement new mask orders now.

The mayors of all three cities signed onto a letter recently that urged Johnson County commissioners to take “prompt action” to mitigate spread of COVID-19, but that letter stopped short of calling for a countywide mask mandate.

Here is what’s on the table:

At a special meeting at 7 p.m. Wednesday night, the Prairie Village City Council will consider a proposed mask ordinance that would be in place until at least Feb. 16.

The ordinance under consideration in Prairie Village is a revised version of the mask mandate that expired Oct. 31, and it cites the “unprecedented health care crisis” brought on by the latest surge of new cases.

There are two notable changes in this new proposal from the previous ordinance.

First, the new ordinance would “remove any and all requirements” that individual businesses and organizations have any responsibility in requiring that patrons or employees be masked.

“Simply put, the requirement is now personal, and businesses and employers are not themselves responsible for requiring employee or customer compliance,” a city memo about the new mask ordinance says.

The second change is that the proposed ordinance also removes any requirement that businesses post mask signage.

As in the fall ordinance, the new mandate would not apply to private residences and houses of worship.

There are also a number of exemptions, including for children 5 and younger, people with certain medical conditions and people seated at a restaurant who are eating or drinking.

The proposed ordinance states that a “knowing or willful violation” of the mask mandate could result in a $25 fine, enforced by Prairie Village Police

If approved, the mask mandate would be in effect until 11:59 p.m. on Wednesday. Feb. 16, though the city council could extend it.

Mission will hold a special meeting of its city council at 5:30 p.m., Wednesday and consider an ordinance that, in many ways, mirrors Prairie Village’s proposal.

Like Prairie Village’s prospective mandate, Mission’s does not make businesses or organizations responsible for ensuring individuals are masked on their premises. It also does not require business to post mask signage.

Mission’s proposed mask mandate applies to “any indoor public space” and in any situation in which a person is receiving medical care.

The same individual exemptions are included, and the mandate would not apply to private residences or houses of worship.

The proposed ordinance would be in effect until 11:59 p.m. on Wednesday, Feb. 23, and could be extended by the city council.

The body is considering a new mask mandate that could take the form of either an ordinance or a resolution.

According to a legal memo included in city documents, the main difference is that with an ordinance, citations for potential violations could be issued to both individual patrons and businesses themselves.

With a resolution, only individuals would be cited and businesses would not be held responsible for requiring customers be masked.

With an ordinance, individuals could be fined $25 for a violation. Businesses could face up to a $250 fine per day for not requiring masks.

As with Prairie Village’s proposed ordinance, similar exemptions for children and individuals with certain health conditions are included in Roeland Park’s proposal.

Private residences and houses of worship would also not be subject to the mandate.

The legal memo from Roeland Park’s counsel, the Mauer Law Firm, warns of the challenges of enforcing a mask ordinance.

“The Roeland Park Police Department is not fully staffed as of the writing of this memorandum,” the memo says. “Calls from individuals and businesses to respond to masking calls may reduce the operational capacity to respond to other calls.

The memo goes on to say that the municipal judge and city prosecutor believe “charges related to masking could bog down the municipal court.”

Likewise, in a separate memo, Police Chief John Morris urged passage of a resolution over a more formal ordinance, arguing that having to enforce reported mask violations “would take away our role from more serious crime prevention in the city.”

“The position of the Roeland Park Police Department is to continue to educate those to take precautions as much as practical and follow the guidance from the CDC and medical professionals,” Morris wrote. “We are not in the business of placing restrictions on citizens who have a difference of opinions on what is best for them on the issue of wearing a mask. “