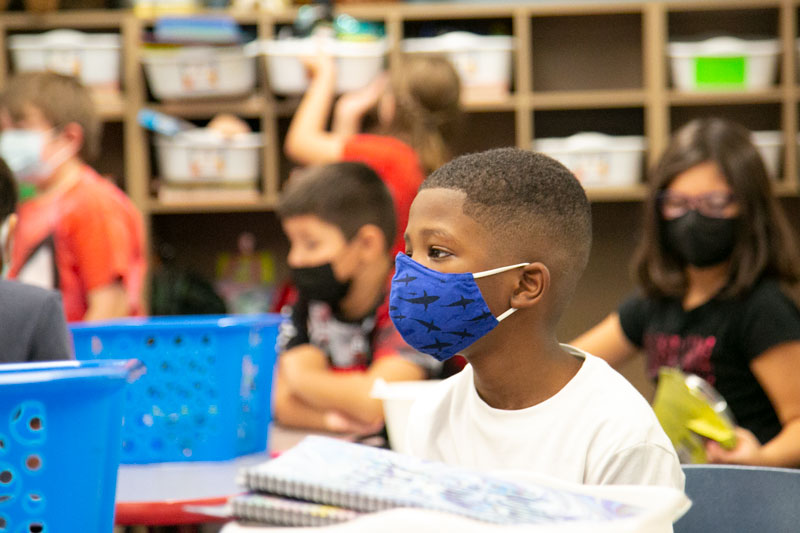 The "Test to Stay" program allows students who are symptomatic or have been exposed to a positive COVID-19 case to remain in school as long as they test negative for COVID-19 for seven consecutive school days. That added frequency of testing could be a challenge to keep up with as new cases increase rapidly across the metro. File photo.

Shawnee Mission is less than a week into implementing its “Test to Stay” program — and district officials say resources are already limited.

With skyrocketing numbers of new cases and high demand for tests, supplies have been limited nationwide, a problem that has become apparent in recent weeks in Johnson County where it is becoming more and more difficult to find tests.

David Smith, Shawnee Mission’s chief communications officer, said the “Test to Stay” plan, which aims to test students more frequently to allow them to stay in school if they test negative, comes with no increases in staffing.

He said, as a result, the district “will do as much as we are able to.”

“It will be a challenge, and we will do the best we can,” Smith said. “Our testing is grant-funded, and meant to supplement community resources, which are limited, as are ours.”

A representative for MAWD Pathology did not immediately respond to the Post’s multiple requests for comment for this story, but there are indications the lab’s own resources and staffing are stretched thin, too.

The Kansas City Star reported that families from Blue Valley waited in a line stretching around the block on Sunday at a MAWD testing clinic, trying to get tested for that district’s own “Test to Stay” program.

Some families told the newspaper they did not get tested until 90 minutes after their scheduled appointment.

Unlike in Blue Vally, where that district directs families to a MAWD lab for testing, Shawnee Mission works with MAWD to run its own centralized testing site at the district’s Early Childhood Center

Smith said Shawnee Mission is offering just this one testing site due to limited resources.

He said the district was administering 152 COVID-19 tests a day in December and is expecting those numbers to increase greatly.

So far, there have been no reports of long lines of cars at SMSD’s testing site like what was seen Sunday at MAWD’s lab for Blue Valley families.

Under the new “Test to Stay” program, students who show COVID-19 symptoms or are asymptomatic but have been exposed to a known positive case can be tested daily for seven days.

As long as the student tests negative, they can stay in school and do not have to quarantine at home.

Students and staff who are in the “Test to Stay” protocol must wear a mask at all times at school, and must eat lunch at least six feet away from others.

Besides an anticipated strain on testing capacity, Shawnee Mission and other Johnson County district are also expecting to do less contact tracing as case numbers increase.

The Johnson County Department of Health and Environment has told local school districts that “intensive contact tracing within schools is no longer feasible,” due to the record-setting number of new cases.

JCDHE says, instead, priority should now be given to identifying positive cases and isolating them.

This means families might not be informed if their child may have come into close contact with an infected person at school.

“We have been told by the county — and we strongly agree with them on this — that we will no longer be focusing on contact tracing,” Superintendent Michelle Hubbard said last week during a University of Kansas Health System’s daily COVID-19 briefing. “Quite frankly, we can’t keep up. We’ll do our absolute best but right not, we have to fall back on those layers of mitigation [to stop spread].”

Those “layers” of mitigation include continuing to wear masks around others and physically distancing when possible.

Schools and JCDHE are also encouraging families to get their children fully vaccinated and, if eligible, boosted.