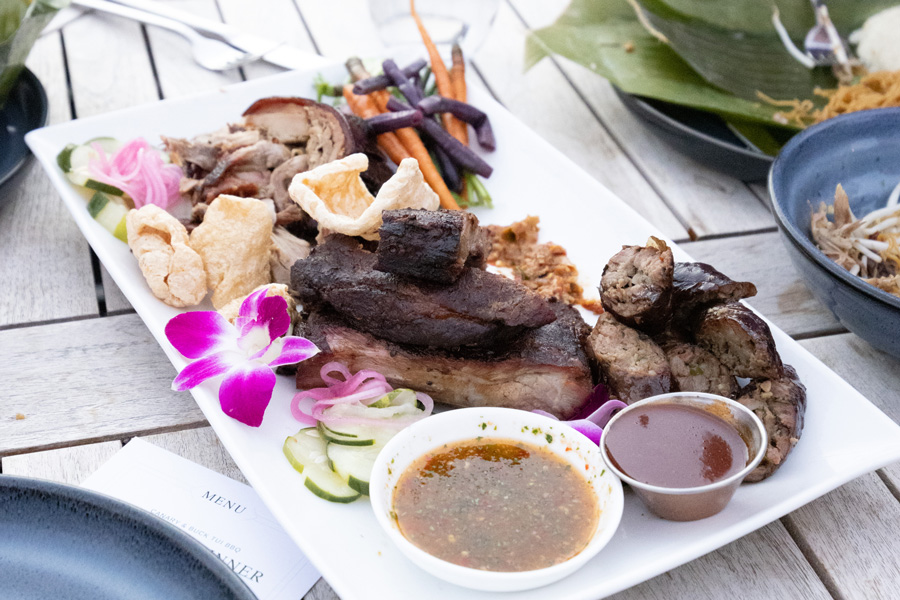 Buck Tui BBQ, owned by the forerunners of the kitchen at Waldo Thai in Kansas City, Missouri, plans to open by the end of this month at the old Plowboys Barbeque space on West 75th Street. Photo courtesy Buck Tui BBQ.

Buck Tui BBQ, a Thai-infused barbecue restaurant, is opening its first location in the former site of Plowboys Barbeque in Overland Park.

Located at 6737 W. 75th St., the restaurant plans to open by the end of this month with curbside carryout orders, according to its Facebook page.

Years in the making

The culinary couple behind Buck Tui BBQ, Teddy and Pam Liberda, also lead the kitchen at Waldo Thai, a popular spot in the Waldo area of Kansas City, Missouri.

Teddy Liberda, the barbecue pitmaster at Buck Tui BBQ, said they’re excited and ready for this next step.

Barbecue lovers can expect to see a variety of signature dishes on the menu, including their fish sauce smoked brisket, Buck Tui noodles, Issan Thai sausage, dumplings and smoked mackerel, plus a Sunday brunch menu.

Buck Tui BBQ was planning to move into a location on 121st Street, but Liberda said they had some construction delays.

The timing, then, was right when Plowboys on 75th Street closed at the end of December and their chef, Todd Johns, reached out to them about the opportunity to take their place.

“Luckily enough, we could get out of there and into this spot that’s ready to go and help our friend Todd out, and also help us out, and here we are, getting ready to open in the new year,” Liberda said. “We just love that it’s in our neighborhood where we launched. It’s closer to Kansas City where we have a lot of our core clientele. There’s a need for something like this in that neighborhood, a full-service bar with real barbecue.”

Buck Tui BBQ will also add a bar by the end of February, Liberda said. Leading the bar will be Mari Matsumoto, the restaurant’s beverage director. In charge of the kitchen is Karen Anderson.