Police responded to a report of at least one gunshot being fired between moving vehicles near 82nd Terrace and Widmer. A police chase with one of the vehicles followed, which eventually led down Pflumm Road and Santa Fe Trail Drive near Old Town Lenexa. Image used under a Creative Commons license.

Lenexa Police are investigating after at least one gunshot was fired between vehicles late Friday night.

Recorded radio traffic says that officers were dispatched to the area of 82nd Terrace and Widmer Road at 10:11 p.m.

A caller reported that the occupants of a black passenger car shot out a window on the victim’s SUV. The victim followed the alleged suspects while on the phone with 911.

Responding officers caught up with both vehicles near 90th Terrace and Noland Road, near Gillette Park.

When an officer tried to stop the suspect vehicle, a black 2016 Ford Focus, it accelerated away, and officers gave chase.

A pursuing officer reported speeds of nearly 60 miles per hour. The suspect driver stopped in the southbound lanes of the Quivira Road Viaduct, just south of Santa Fe Trail Drive.

At least two people were detained at that car stop.

Police closed a stretch of Pflumm Road from 80th Terrace to 82nd Street as they searched for evidence in the area.

Radio traffic indicates that officers located broken glass in the southbound lane of Pflumm. The road reopened shortly after midnight.

A Lenexa Police spokesperson told the Post Saturday morning that the shooting was a “road rage type incident” and that the two drivers had no prior connection to each other.

The suspect vehicle was towed to the Johnson County Crime Lab in Olathe for processing. 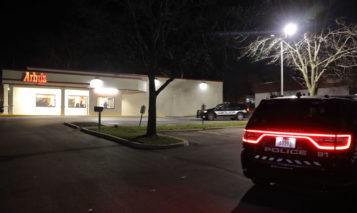 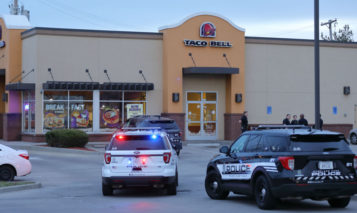