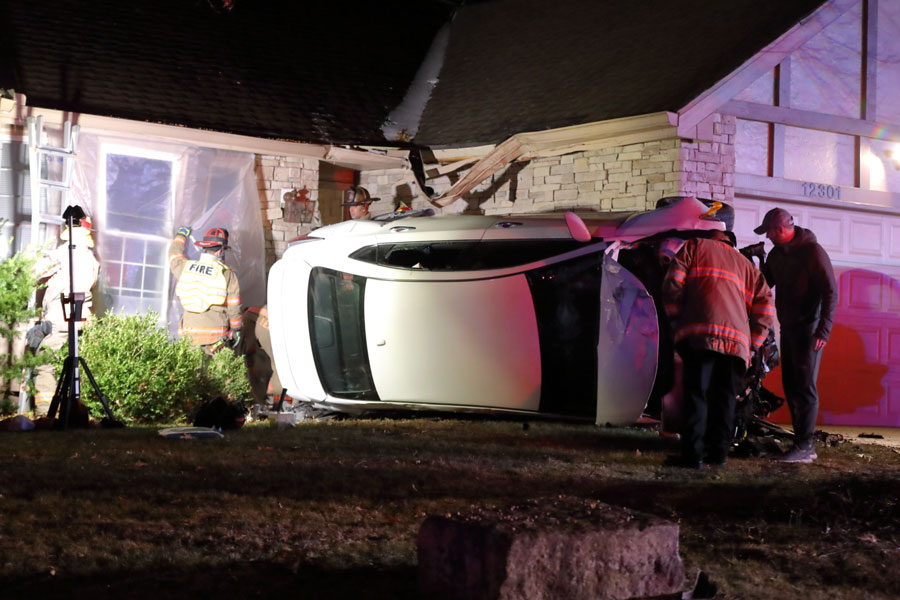 Firefighters and investigators inspect a car, which is laying on its side, near the front door of a home on 99th Street in Lenexa early Sunday morning. The man who was driving the car was taken into custody with what were described as non-life-threatening injuries. Nobody in the home was injured. Photo credit Mike Frizzell.

A man is in police custody after he sped away from an attempted traffic stop early Sunday morning in Lenexa and eventually crashed into the front of a home.

Recorded radio traffic indicates that an officer attempted to stop a Nissan passenger car in the parking lot of QuikTrip, 12355 West 95th Street, just after 1:20 a.m.

Instead of stopping, the driver sped away southbound on Monrovia Street.

A police spokesperson later said that when the car left the QuikTrip parking lot “officers turned off their emergency equipment and were not in pursuit.”

The suspect, only identified as a 23-year-old man, then apparently lost control of his car and crashed into the front yard at 12301 West 99th Street.

The car rolled over at least once and hit the front of the house. Police pulled the suspect from the vehicle and arrested him.

Johnson County Med-Act transported the man, in police custody, to a nearby hospital with a head injury. His injuries were described as non-life-threatening.

No one inside the house was injured.

The crash broke several windows on the house, damaged at least one wall, and smashed some guttering. The back of the car came to rest just outside the home’s front door.