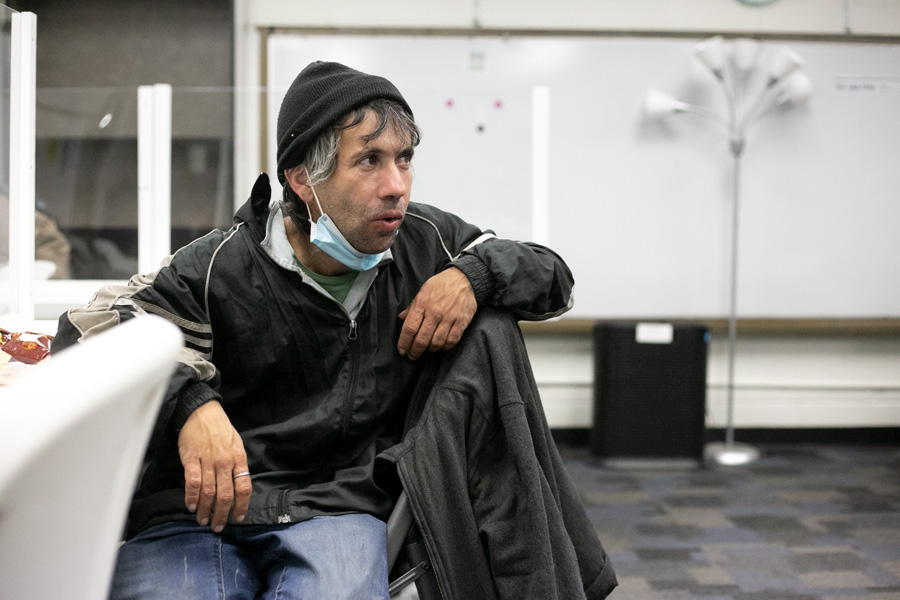 Construction improvements, including adding showers and additional fire safety measures, caused Project 1020 to delay opening the cold-weather shelter by a month. Now, the shelter at Shawnee Mission Unitarian Universalist Church is in full operation. "It helped on the 31st when they opened because that was going to be the coldest night," said Stephen Roberts, one of the guests, pictured above.

After a month’s delay due to construction, Project 1020 — the only cold-weather homeless shelter serving single adults in Johnson County — has opened for the winter season, just as local temperatures have dropped to single digits.

This winter, however, the shelter opened a month later on New Year’s Eve.

Interested in supporting Project 1020? Get more information about donating here or volunteering here. The shelter also has an Amazon wishlist for needed items.

Since August, Project 1020 and the church had been busy making improvements to the shelter facility, adding showers to the men’s and women’s restrooms as well as fire doors and additional fire safety measures in the sleeping rooms.

The upgrades, which cost at least $120,000, were needed in order to comply with the city of Lenexa’s new regulations, which city leaders adopted in March 2021 to allow the shelter to remain open during winter.

Scott McCullough, community development director for the city of Lenexa, said the city would have allowed the shelter to open on time, so long as the shelter provided mobile showers in a trailer outside the building and also conducted hourly fire checks in the rooms.

“I do know it weighed on their minds that there was going to be an impact [on the guests], and everyone seemed very grateful for the warmer weather [in December] this year,” McCullough said. “As it was, the weather was quite accommodating.”

Barb McEver, co-founder of Project 1020, said she and other shelter leaders decided to delay opening the shelter because they wanted to avoid mixing construction with the shelter operations.

The logistics would have become too complicated, she said, with keeping men and women safe and separate in mobile showers.

In addition, mobile showers would have cost Project 1020 upwards of $10,000 for the month of December — money McEver said they would rather put towards serving the guests, as well as construction improvements and other needs.

Some disruptions in getting construction materials — caused by broader, ongoing supply chain issues worldwide exacerbated by the COVID-19 pandemic — also led to the month-long delay in opening.

In the meantime, Project 1020 provided motel rooms to anyone needing shelter who had reached out to them this month, McEver noted.

“Everybody really counts on Dec. 1,” McEver said. “Usually in October, people start calling about Dec. 1. So that was really difficult. Thank God we had mild weather here. I swear, somebody was looking after everybody.”

Some guests hadn’t contacted Project 1020 but still had plans to come stay there at night in December. They made do with sleeping outside near churches and other places that might be safer.

“It was OK until it started getting cold,” said Adrian Robinson of Kansas City, Missouri, who was staying at the shelter earlier this week. “Nobody really wants to be homeless at any time. I don’t mind when it’s warm, but when it starts getting cold, then… things are harder. Just the cold makes it more drastic.”

Robinson said he and the other guests are relieved now that the shelter is open.

“I don’t have to worry about where I’m going to sleep anymore tonight,” he said. “The delay had me kind of upset.”

At this point, all of the construction improvements are complete except for the showers, which have curtains now but will have permanent doors once they arrive and can be installed.

McEver said the improvements, particularly the showers, have been a huge blessing for guests. Prior to the shower installations, shelter guests were regularly taken off site for showers elsewhere.

“There was something that was so degrading to me about that, to go up to these adults and say, ‘Do you need a shower?’, to load people up in a van and take them somewhere to get a shower,” McEver said. “I love the freedom for people to say, ‘I’m going to go take a shower.’ People should have that liberty of taking a shower.”

McEver added that she’s thankful to Evardy, the construction company for their work — some of which was offered for free, in terms of labor and materials — as well as the city for being accommodating and supportive through this process.

“When you have support and just a positive attitude towards something that we’re trying to do makes all the difference in the world,” McEver said. “And for the people staying here, they pay attention to what’s going on, and their attitude is so good because they feel like it’s not just Project 1020 coming to bat for them. They feel like they’re part of the community, which is what they really long for. People need to know they matter, and I believe they feel that way.”