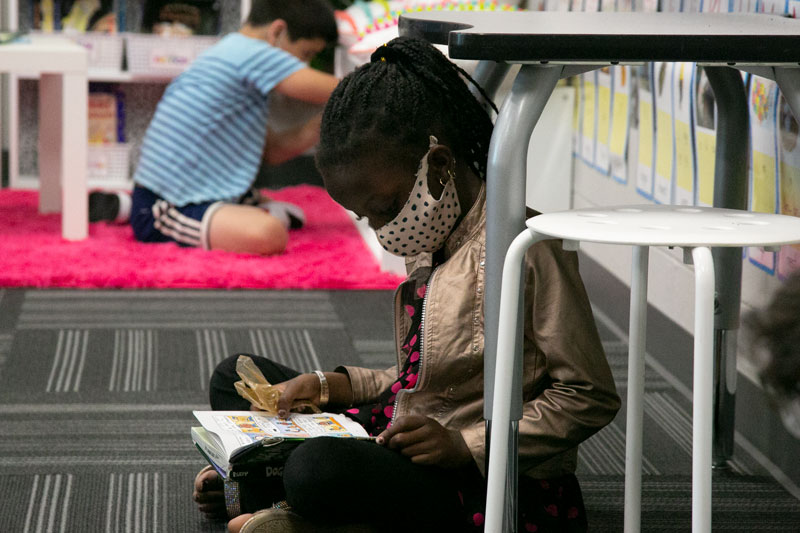 On Thursday, the Johnson County Board of County Commissioners voted to keep the county's public health order in place requiring masks for students up to and including 6th grade. The board, however, rejected a motion to extend that order to all students K-12 and will review the K-6 one within the next six weeks. Above, a student reads at Crestview Elementary in the Shawnee Mission School District.

Crowded hospitals and a winter surge of sickness from the highly transmissible Omicron variant trumped emotional pleas against face masks Thursday, as Johnson County commissioners decided to let stand a requirement for masks in elementary schools.

The vote means masks are still required indoors for children up through sixth grade. Commissioners will revisit the discussion no later than six weeks from now.

The original health order, approved in August, is set to expire May 31.

Commissioners decided before the Christmas break to re-evaluate the mask order after looking at county statistics on community spread and vaccination. In the intervening two weeks, new cases in Johnson County and the greater Kansas City region have skyrocketed.

Medical officers from across Kansas warned in a virtual press conference Wednesday of stressed hospitals, full to the brim with patients from the highly transmissible Omicron and Delta variants of the coronavirus.

Short of a united community effort, they said, hospital officials could find themselves in the position of having to ration care.

“We would really appreciate the help right now to leave kids in masks. Get us through the winter,” she said.

The doctors’ warning, along with the news that the county’s incidence and positivity rates are at an all-time high, brought pressure from the public and other elected officials for strong mitigation efforts by the county commission.

The county’s online COVID-19 dashboard Thursday said the the incidence rate stood at 1,099 cases per 100,000 residents over the past seven days, and the positivity rate was 23.6%.

The commission on Wednesday received a letter signed by nine Johnson County mayors asking that it take action to encourage vaccination and acquire tests and take other measures but stopped short of calling for mask mandates.

About half of the 39 people who spoke at today’s meeting asked for the elementary school mask requirement to be kept in place. That order covers students up to and including sixth grade.

Several speakers also urged that a mandate be extended to cover all students through high school, plus a return of a mask requirement for the general public.

Some of the speakers, like Melissa Gener, said the worry about catching and spreading COVID-19 has proved frightening and exhausting for her kids without assurance of masks.

“My teen high schooler cried and begged me to stay home because she is terrified of catching COVID and spreading it to her two young brothers, who are both still too young to be vaccinated,” she said.

“I am begging you to please just do the bare minimum to give my children a safe place to be educated.”

Another, Sally Groesbeck, said she worries about her two children in Blue Valley schools who have medical conditions and may need help as health care providers are under strain from patients and staffing shortages.

“K-8 schools cannot shoulder the mitigation of this highly transmissible disease on their own. We can no longer rely on people to make the right choices and to mask up because they’ve shown they can’t,” she said Thursday.

Emily Yeretsky of Leawood said disruptions to school — caused by potential cancellations or a lack of qualified substitute teachers — is also hard on children’s learning.

She also directed criticism directly at Commissioner Charlotte O’Hara, who has opposed mask mandates and has linked them to mental health issues.

“I can tell you first hand Ms. O’Hara that when kids are not in person in school learning and socializing with their peers, feelings of depression, isolation and sadness likely arise. It’s because they’re not in school not because of masks,” she said. “Shame on you Ms. O’Hara for exploiting suicide for your political benefit.”

About half of the speakers inveighed against masks, claiming they don’t work to stop spread of the disease.

Some also suggested that COVID-19 vaccinations are harmful and that public health mitigation measures infringe on personal liberty.

Dave Trabert, CEO of the conservative-leaning Kansas Policy Institute, questioned whether the commission could prove the mask requirements were less harmful than the negative effects of masking.

Ben Hobert of Westwood Hills referred repeatedly to vaccinations as “clot shots” and suggested the commission is engaged in unlawful practice of medicine by requiring masks and that the district attorney should investigate.

Others expressed a distrust of mainstream medicine and the media.

“I would like to follow the money,” said Joann Atchity of Shawnee. “Money is what is driving COVID,” in the form of government grants for mitigation, she said.

“This nose right here is just as effective as any mask,” he said.

Commissioners took several tries before coming up with a compromise resolution to continue the order and review it in six weeks.

O’Hara first asked that the existing mask requirement allow schools to opt out but that motion died 5-2, with only herself and Commissioner Michael Ashcraft voting for it.

Commissioner Janee Hanzlick then asked for discussion of extending the order through high school or returning to a general mask mandate, as some speakers had asked.

But neither of those ideas received much enthusiasm from other commissioners, who said a general mask mandate proved too hard to enforce and that school districts already have policies that trigger mask wearing if absenteeism becomes high enough.

In fact, on Wednesday, nine Shawnee Mission middle and high schools announced they would bring back mask requirements after the first day of classes of the new semester for that very reason.

The proposal to expand the mask requirement through 12th grade failed, with Commissioners Becky Fast, Jeff Meyers and Hanzlick voting in favor.

There was then more discussion before the commission voted 5-2 to continue the existing health order with a review in six weeks or less.

Ashcraft and O’Hara voted against it.

O’Hara called it a “political show” since it would not change the schools’ ability to do their own mitigation.

Meanwhile in Kansas City, Missouri, on Thursday, Mayor Quentin Lucas said he would introduce an ordinance to the Kansas City Council that would require masks in K-12 schools there.