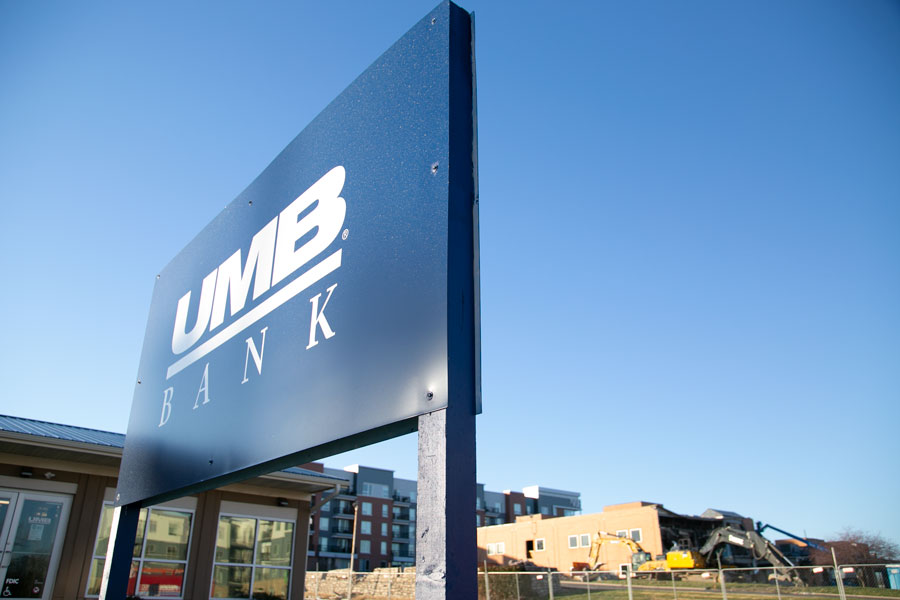 The UMB Bank in downtown Overland Park is being demolished. This is in connection to a larger project to revamp the branch and property on the corner of the busy intersection at 80th Street and Metcalf Avenue. Above, the UMB sign outside of the temporary branch on the site of the former Winstead's next door. Construction equipment can be seen in the background taking down the current two-story UMB branch. Photo credit Juliana Garcia.

UMB Bank at the corner of 80th Street and Metcalf Avenue in downtown Overland Park is being demolished.

It’s part of the bank’s plans to revamp the 44,420 square foot building and the surrounding landscape. The plan calls for an open, public plaza at the busy intersection.

The redesigned property is set to include:

A temporary UMB Bank branch is currently located immediately south on the site of the former Winstead’s at 8036 Metcalf Avenue.

The old Winstead’s building was demolished in September to accommodate the new, temporary branch.

The Overland Park Planning Commission approved the temporary branch to be in place for two years.

After opening in the 1980s at that location, Winstead’s closed in 2017 and sat vacant until it was taken down this year.

Another change noted by some readers to the intersection at 80th and Metcalf is the removal of the “Overland Stage” sculpture depicting a horse-drawn stagecoach.

That fiberglass and wood statue sat at the intersection for 50 years. Now, as the Post reported earlier this month, it’s been relocated to Independence, Mo., near that city’s historic town square.