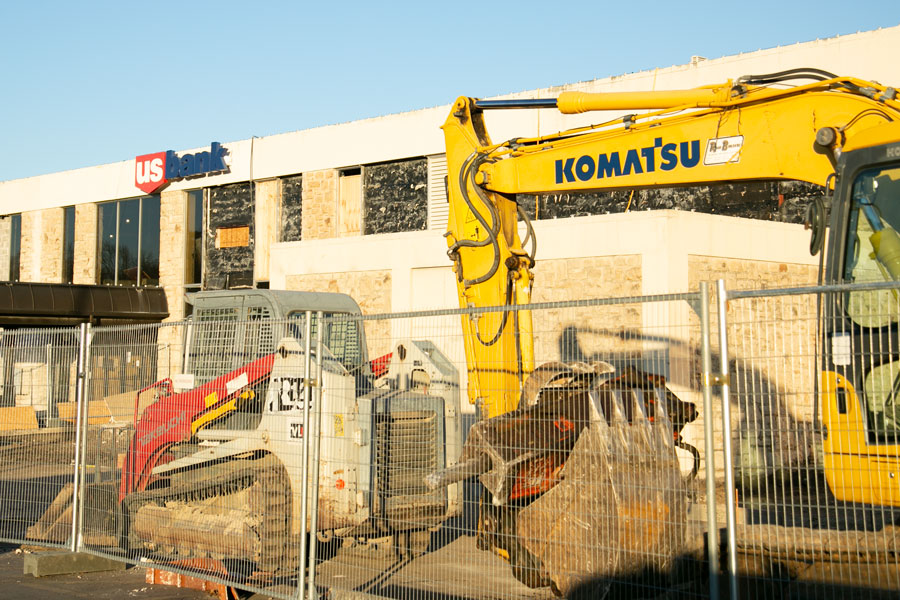 The US Bank in Prairie Village is on track to become a multi-tenant space with a medical office and a restaurant sometime next year. Above, exterior renovations are ongoing at 6940 Mission Road. Photo credit Juliana Garcia.

Patrons to The Shops of Prairie Village and people driving nearby on Mission Road may notice some construction at the US Bank at 6940 Mission Road.

First Washington Realty, the Shops’ Maryland-based landlord, is reconstructing the building with plans to put in a restaurant and medical office.

Gregg Zike, First Washington senior vice president, told the city council on Monday that tenant spaces should be built out by this time next year.

“The 6940 Mission redevelopment is underway with landlord construction now,” Zike told the city council. “We’ll deliver this summer and tenants will be building out in [quarter three] or [quarter] four [of 2022.]”

Zike said nothing Monday about what tenants will eventually move into the reconstructed building.

The building previously housed US Bank only, and the reconstruction will change it to a multi-tenant space, according to city documents.

US Bank will remain a tenant but on a smaller scale with less office space, according to city documents.

First Washington Realty did not immediately respond to requests for comment for this story.

Earlier this year, the Prairie Village Planning Commission unanimously approved the exterior improvements to 6940 Mission Road with the following conditions, as outlined in city documents:

Zike told the planning commission at that time that there are no plans to add another drive-thru for the restaurant tenant.