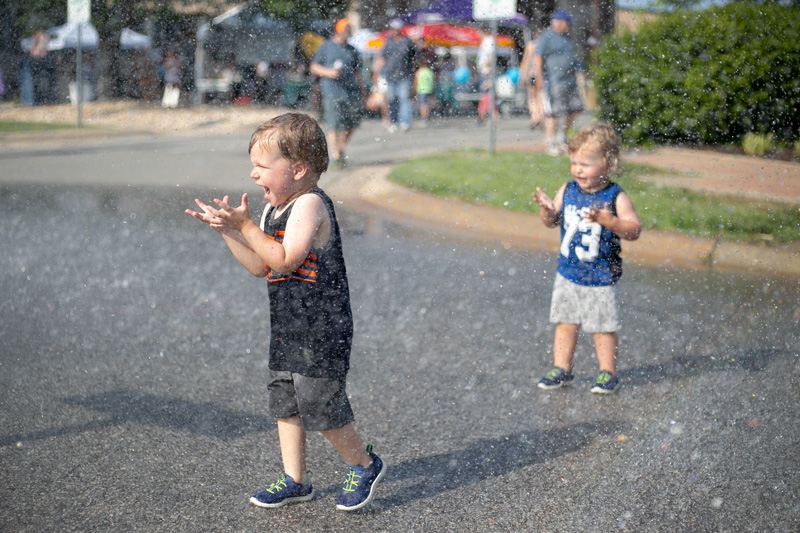 Shawnee city officials said Moonlight Market, the city's pilot program that offered an evening market downtown on the third Thursday of the month through part of the year, was successful at drawing crowds and local vendors. Above, brothers Kipton Wheeler (left) and Waylon Wheeler of Shawnee play in water spraying from a nearby fire hydrant at a Moonlight Market in June.

Moonlight Market, Shawnee’s summer series of events the city debuted earlier this year, was a success, according to city officials. That’s why the city plans to continue the event in the future but with some changes.

Shawnee city leaders and staff in a committee meeting Monday reviewed this year’s pilot, which was a monthly market event in the downtown area that took place the third Thursday of each month from May to October.

A couple of Moonlight Market events were canceled (including the very first one in May) because of severe weather, but the events that took place were well-attended and grew in popularity as the summer went on, city staff reported.

The events included children’s activities, live bands and food trucks, as well as a variety of vendors that sold produce, arts and crafts and handmade goods.

The city’s previously stated goal of the Moonlight Market was to attract people to the downtown area and further establish it as a destination.

Council President Eric Jenkins (who was selected to the position by his peers earlier in the meeting) said he’d like to know if the plan worked.

“I’d kind of like to know that we got some good spillover effects from this, and if we can capture that kind of information, I think it would be a great sales point and we could present that back to the Shawnee Downtown Partnership people, and those people that have a vested interest in the vitality of downtown,” Jenkins said. “If you can’t come up with something, we can certainly do it next year, try to see if we can monitor, ‘Hey, did we get a bump from this, did it really help us in doing what we’re trying to get done downtown.’ Let’s see if we got some bang for our buck as well.”

Here are a few takeaways from this week’s discussion:

A recording of the meeting is below and on the city’s website. Discussion begins at 1:58:19.