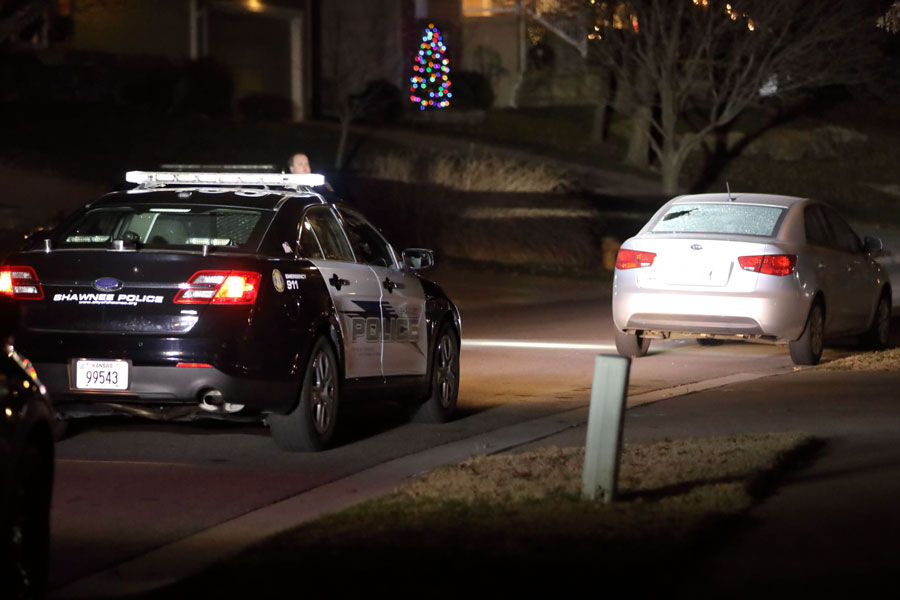 A Shawnee Police cruiser shines its lights on a Kia passenger car that had its back window hit by gunfire Sunday night in the Red Oak Hills neighborhood west of I-435. Police indicate the victim and suspect knew each other. Nobody was injured. Photo credit Mike Frizzell.

Shawnee Police are investigating after someone fired a rifle at another person in the Red Oak Hills neighborhood near Interstate 435 and Midland Drive Sunday night.

Officers were dispatched to a home in the 6700 block of Red Oak Drive shortly after 10 p.m. Sunday after dispatchers received multiple 911 calls reporting gunfire heard in the neighborhood.

At the scene, officers found a Kia passenger car with a shattered rear windshield and at least one rifle casing in the street.

Officers identified one person believed to be the victim. Recorded radio traffic indicates that the person was uncooperative when questioned by officers.

The Shawnee Fire Department responded to the house just before 11 p.m. to assist police with a ladder. One officer could be seen climbing to the roof of the home to check for damage.

Police have not said if anything was located.

Sergeant Joshua Bayless said that police believe the incident may be drug-related but would not elaborate on that statement.

In an emailed response to questions on Monday afternoon, Major Jim Baker, the spokesperson for Shawnee Police, stated that a car’s rear windshield being shot out was the only damage officers located.

There were no injuries reported, Baker said.

“The details for this incident are a bit sketchy, and our detectives are trying to gather further information to clear up some unknowns, as well as trying to identify a suspect,” Baker said. “We believe this was not a random act and that the victim and suspect are acquainted with each other.”

Just after 11 p.m., Merriam Police were dispatched to check an address in their city for vehicle that possibly matched a vehicle from the shooting.

An officer reported being passed by a black Ford Fusion, matching the description of the car he was sent to check for at the address.

“This incident could lead to charges of aggravated assault and/or criminal discharge of a firearm,” Baker said. “One could make assumptions about this being drug-related, but it would be conjecture until more facts are known.”

Police have not said what, if any, connection the victim has to the neighborhood.