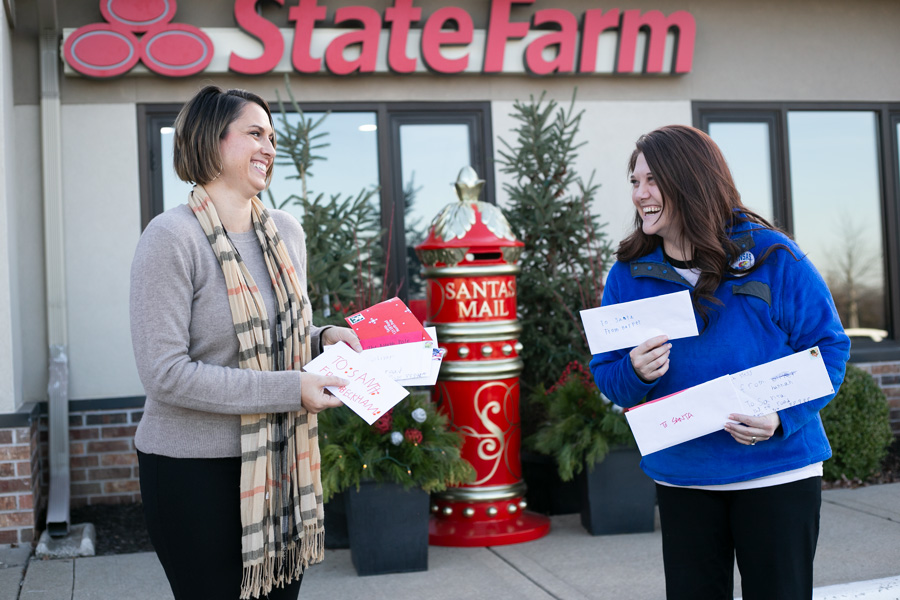 Santa in Shawnee volunteers Katie Reed (left) and Jamie Weese are collecting letters to Santa that go in the magical mailbox in front of the State Farm branch off Shawnee Mission Parkway and Monticello Road. "It’s just really our way to give back," Reed said. Photo credits Leah Wankum.

Children in Johnson County have once again been sending letters with their last-minute wishes to Santa Claus via a magical mailbox in western Shawnee.

The “Santa in Shawnee” mailbox made its first appearance this year the day after Thanksgiving in front of the State Farm branch at 21632 Midland Drive, near Shawnee Mission Parkway and Monticello Road.

Children can drop off letters in the mailbox’s slot between now and Monday, Dec. 20.

State Farm and other local businesses helping take the letters say children should make sure to put their names and return addresses on the letter’s envelope so that Santa can write back.

The “Santa In Shawnee” mailbox began in 2018, the brainchild of several local businesses who wanted to host a place for children to send letters to Santa.

The mailbox has also been the centerpiece of a special Christmas event that has evolved over the years, from a drive-thru format with treats for the children, to photo sessions with Santa Claus and crafts and games hosted by other local businesses.

Two of the women behind “Santa in Shawnee” — Katie Reed, wife of Shawnee State Farm agent Nick Reed, and local attorney Jamie Weese — said the mailbox is their way of helping children connect to Santa Claus each year.

“We started getting letters from Oklahoma, so I was just like, ‘Well, the mailbox has to be here,’” Reed said. “It sort of is now attached to our address, so when it’s out, it just sort of needs to be here.

“For us, Jamie just loves Christmas and I love Christmas, and we’re just so thankful for all the support we get from the community all year long,” Reed added. “It’s just really our way to give back.”

Their first year, Reed and Weese say they helped Santa return about a hundred letters. This year, they’re on track to help return 250.

Weese and Reed said this year won’t include an event with COVID-19 still going around. However, they strongly believe the letter tradition needs to continue.

“I am always game for anything fun about Christmas, just always, but then… there’s the giving back aspect of it,” Weese said. “I think the reason it’s important for the kids is because of the normalcy that we can have during all of the craziness that we have had over the last 18 months to two years.

“Kids need that reminder that life continues, and it’s not all doom and gloom.”

In addition to the Santa mailbox, Reed, Weese and other volunteers are collecting new and gently used warm clothing — coats, hats, gloves, scarves, etc. — for Cornerstones of Care.