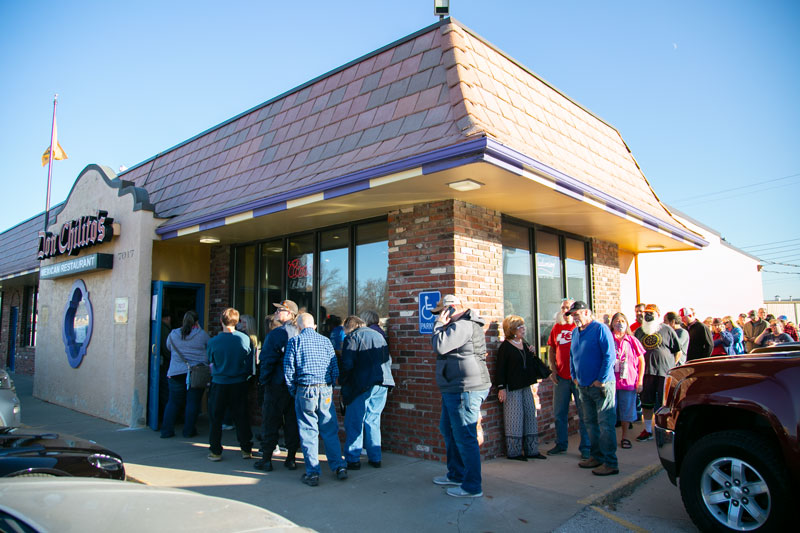 After 50 years, Don Chilito's in Mission is closing on Friday, Dec. 10. Owner Barry Cowden says there's been a line of customers out the door, like the one above, for a couple of weeks now.

After 50 years in business, the Mexican restaurant is closing its doors for good on Friday, Dec. 10.

Owner Barry Cowden — who started working for his father at Don Chilito’s in 1977, when he was 13 — announced his retirement on Facebook in September.

Cowden told the Post he wanted to retire three years ago, but decided to hold out until the restaurant hit its 50th anniversary.

“I wanted to make it to 50 years, that was like a milestone,” Cowden said. “There’s very few restaurants in history that make it that long. That was one of my goals and I made it. Now it’s time to turn the page, basically.”

For the last several weeks, Don Chillito’s customers have been lining up outside the restaurant on Johnson Drive, sometimes more than two hours before it opens to get their fix.

Cowden said the response is more than he expected following his retirement announcement.

Betty Evenson was in line outside on Thursday morning. She said she’s eaten at Don Chilito’s for 49 years, and some of her favorites include the chips and queso, sopapillas and taco salad.

“We just enjoy it,” Evenson said. “We’ve enjoyed coming over here since 1972. We’ve told I don’t know how many people about it, and they’ve joined us and come over with us. It’s been great.”

Evenson celebrated her most recent birthday at Don Chilito’s on Nov. 7, and her daughter has pre-ordered the Don Chilito’s recipe book, which can be purchased online.

KSHB reported in November 2020 that investigators with the Johnson County District Attorney’s office came to the restaurant after receiving complaints, but it appears charges were never filed.

“It’s supposed to be a free country, and we can make our own decisions with what we do in our lives and in our businesses,” Cowden told KSHB at the time.

As for his retirement, Cowden said he plans to take it easy for a while.

He said he didn’t sell the Don Chilito’s brand, and while he doesn’t plan on owning another restaurant, he might sell merchandise or food products at some point.

Cowden said he hopes people remember the anniversaries, first dates and family gatherings they had at Don Chilito’s, and fondly recall the environment he says made it so special for half a century.

“I hope they’ll remember we did our best to serve the community high quality food, consistently, at a fair price,” Cowden said. “My staff always strived to give them great service, to make everyone feel like family and home here — and I think that we succeeded.”