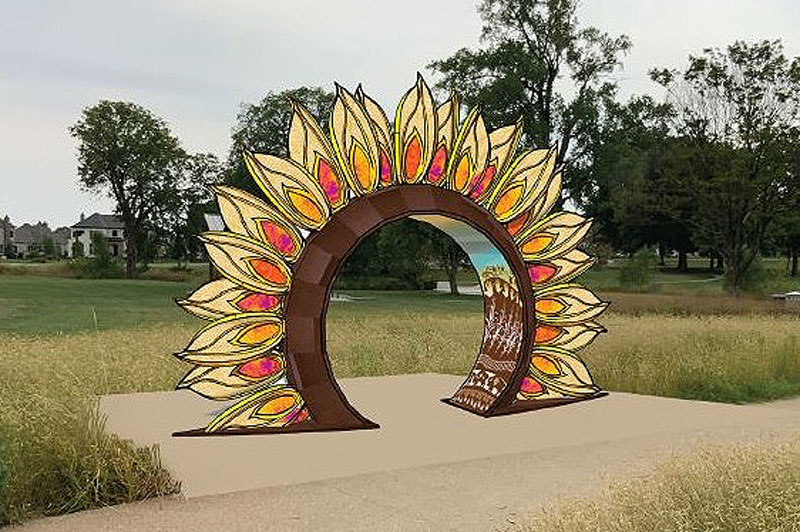 "Gateway," by Amie J. Jacobsen is the first piece of public art to be installed Prairie Village's Meadowbrook Park at 9101 Nall Avenue. The 12-foot, $95,000 sunflower-shaped arch will feature about 24 brightly colored petals and history lining the interior. It was selected out of three finalists. Image via Johnson County Parks and Recreation.

Susan Mong, superintendent of culture at JCPRD, said Jacobsen’s submission, which depicts a sunflower-shaped archway, appealed to community members for its color and vibrancy.

Plus, a historical component — with illustrated panels on the interior of the arch that can be viewed by those passing underneath — elicited excitement for the work as well, she said.

“[The artist] was very thoughtful about incorporating the history of Meadowbrook Park and that site into the piece, which makes it more interactive and kind of strengthens the sense of place,” Mong said.

“Gateway”’s arch will stand nearly 12 feet tall. There are about 24 bright petals made of “a center of cast glass, that will glow in the sunlight as well as with the lighting at night,” according to JCPRD’s website.

The $95,000 piece will be placed north of Meadowbrook Parkway, though specific placement details are still being decided, Mong said.

The installation of “Gateway” will be funded through JCPRD’s master plan program, which uses both public and private dollars.

Private, individual donors and a grant from the AT&T Foundation account for 25% of funding for the project, Mong said.

Mong added that JCPRD hopes to offer emerging artists a chance to engage with and watch Jacobsen as she works on the piece during the installation next year in an effort to help young local artists learn, she said.

“It is our goal to provide educational opportunities as this piece is developed, and in any future projects, because what we want to do is increase the overall capacity in this region for public artists to learn and stay behind the curtains,” Mong said.

Mong said design drawings and construction are expected to last through the end of the first quarter of 2022.

Then, “Gateway” is expected to be installed and ready for the public to view by early June, she said.