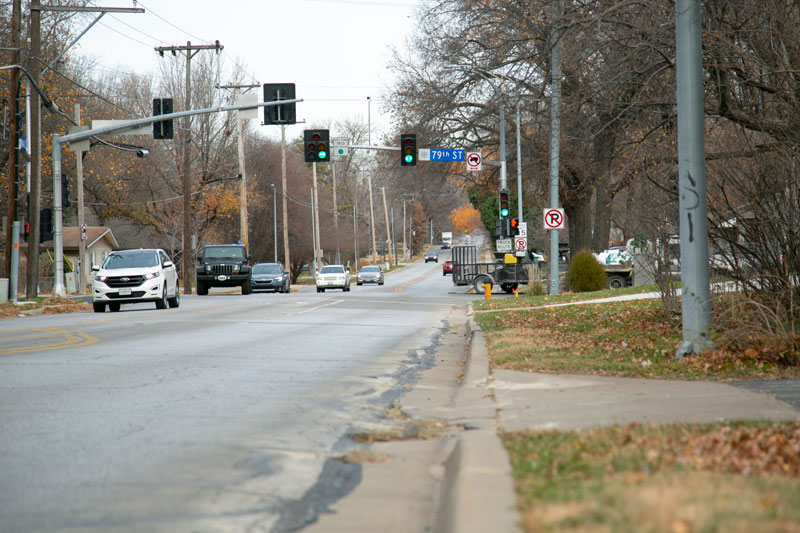 The city of Prairie Village is going to install a sidewalk along the east side of Nall Avenue from 79th to 81st Streets. This will bring the road in compliance with a city policy requiring sidewalks on both sides of certain busy roads. But a century-old retaining wall is making it more complicated to extend the sidewalk to 83rd. Photo credit Juliana Garcia.

The city of Prairie Village will install a sidewalk on the east side of Nall Avenue from 79th to 81st Streets but will stop short of extending that sidewalk another two blocks south due to some existing impediments, including a nearly century-old stone wall.

The stretch in question runs along Nall from 79th to 83rd Streets, where is currently only a sidewalk on the west side of Nall.

That means this stretch of the thoroughfare is not in compliance with the city’s policy calling for sidewalks on both sides of certain busy roadways.

While the two blocks from 79th to 81st present typical sidewalk installation challenges like trees, the stretch from 81st to 83rd Streets comes with a stone retaining wall.

The wall presents several challenges for sidewalk installation, including a backward slope toward the wall.

Unless the city approves a more than $1 million project to lower Nall Avenue, Senior Project Manager Melissa Prenger said there’s nothing the city can do other than wait for the wall to no longer be a constraint.

That’s why city staff recommended not extending the sidewalk between 81st and 83rd, she said, leaving that two-block stretch out of compliance with city policy.

“We tried diligently to fit this sidewalk in, we just could not make it work from 81st to 83rd,” Prenger said. “Staff does not often not recommend going with city policy.”

Three residents, all of whom live on the impacted four-block stretch of Nall, asked the city council on Monday to not move forward with the sidewalk addition.

Debbie McDonald said she and her neighbors want to preserve the retaining wall — which city staff estimates was built in 1929. She said there “is a perfectly good sidewalk on the other [west] side” of Nall that is set back further from the street and safer for pedestrians than one on the east side would be.

“I realize there is a popular movement to make cities more walkable, even those like ours that get ice and snow,” McDonald said. “Unfortunately, every place cannot be sensibly retrofit.”

Despite resident concerns, the city council unanimously approved the project from 79th to 81st Streets.

Additionally, several councilmembers said they want to continue to work to bring a sidewalk to Nall from 81st to 83rd Streets.

Councilmember Ian Graves said while he’s sympathetic to the wall as a historic, interesting artifact, it’s being weighed against the safety of pedestrians and accessibility.

Graves said while he’s disappointed a sidewalk along 81st to 83rd Streets can’t happen at this time, he thinks city staff has done a good job of making the best out of a tough situation.

“I want to keep thinking about ways we can ultimately tie the knot on this and complete the sidewalk on both sides of Nall,” Graves said.