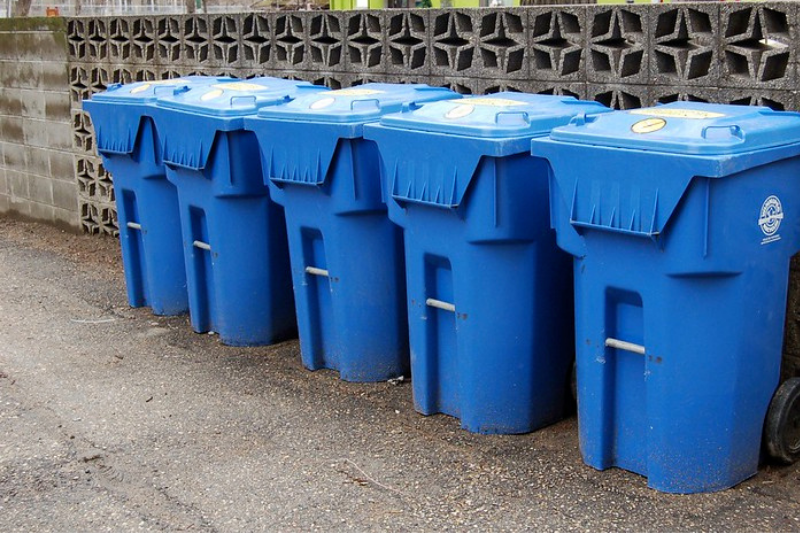 An Overland Park city council committee on Monday advanced an ordinance that would, among other things, would allow residents to store trash and recyclable bins (like the ones above) at their homes without them being shielded from public view. File image.

One change would loosen the city’s current regulations governing how residents store their trash and recyclable bins at home.

The other change would significantly overhaul the city’s bulky item pickup service.

At its meeting Monday night, the Overland Park City Council’s community development committee approved an ordinance that, in part, would change how bulky item pickup is managed in the city.

That part of the ordinance addresses the collection of larger items, like couches, mattresses or automobile parts.

As outlined in the ordinance, residents would now have the responsibility of scheduling bulky item pickup with their trash hauler, as well as negotiating the price for that pickup.

That’s a change from current practice, in which bulky item pickup is managed by the city.

“We’re just not able to do that collection in the way that we’ve been doing it for years any longer,” said Jim Twigg, the city’s environmental programs coordinator. “The industry has changed to the point that it’s just not feasible to continue the program.”

Councilmember Faris Farassati voiced concern that by mandating that trash haulers make bulky item pickup part of their service structure, fees would most likely go up for residents.

He said he also worries that residents with fixed incomes or lower socioeconomic status would face more of a financial burden.

“In my eyes, it’s nothing but cutting the service that we have provided,” he said. “You can put as much technicality as you want to, but it doesn’t take the outcome of this away.”

But Councilmember Chris Newlin, who was participating in his final meeting before the new city council was to be sworn in later Monday night, said in discussions in his own south ward neighborhood, competitive bids from trash haulers who include bulky item pickup have actually lowered costs.

He said Overland Park has more trash haulers available than residents might realize, and he thinks this model could be mutually beneficial.

“This is a better deal for the community as a whole,” Newlin said. “This will be worked into a normal business process of a hauler, and understanding business like I do, they can put that cost in and get it out to more people on a more regular basis during a regular cadence.”

Currently, residents are required to store their bins behind the front line of their homes and shield the containers from view of the street.

With the change, however, residents would not have to shield their trash and recyclable bins as long as the containers are within two feet of the residence.

“We think it’s fair and it’s pretty similar to to how the other jurisdictions and our neighboring county is doing it,” said Vincent Jones, the city’s manager of community services.

The committee approved the proposed ordinance covering both the bulky item and trash bin storage items, with Farassati casting the only dissenting vote, based on his opposition to the bulky item changes.

The ordinance will go before the full city council.