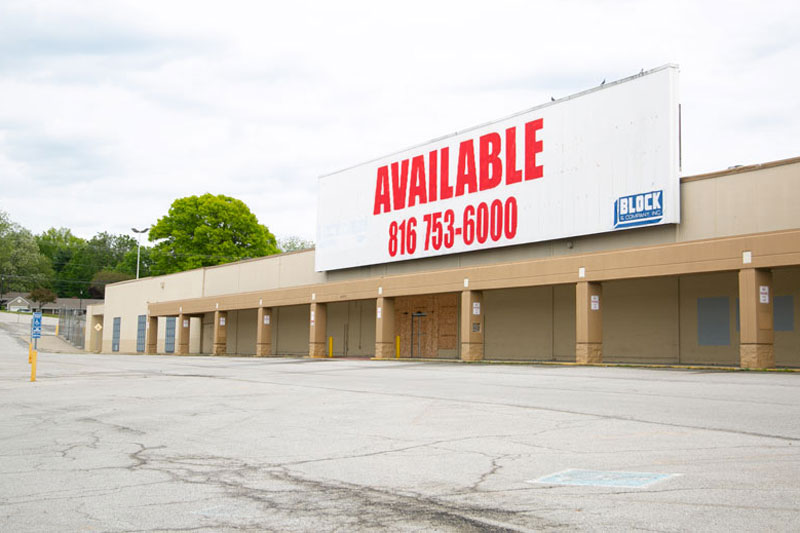 Matt Pennington, president of Overland Park-based Drake Development, says an application for a mixed-use redevelopment at the long-vacant Kmart site in Merriam is expected to be submitted in January. Above, the former Kmart with a large "Available" sign out front. File photo.

Matt Pennington, president of Overland Park-based Drake Development, said an application for a mixed-use redevelopment — featuring residential spaces and restaurants, similar to other Drake projects in the Kansas City metro — could be submitted to the city as soon as January.

The developer and the city of Merriam have been having conversations about the potential redevelopment for “a long time,” but it’s been a work in progress, Pennington told the Post on Friday.

Pennington said Drake and the city have been trying to work through the details of issues at the aging site, including asbestos treatments and topographical challenges, like a steep 60-foot incline entering the parking lot from Antioch Road.

“There are a lot of challenges with this site, that’s one of the main reasons it’s sat there — it’s not an easy one to redevelop,” Pennington said. “We’ve done some of the most difficult developments around, and this one is certainly taking the cake to try and figure out economically and really just topographically.”

Since Kmart closed there in January 2013, the vacant site has deteriorated significantly — including the roof, the facade and finishes.

Over the past decade, multiple redevelopment plans for the site have fallen through, including a plan for a Menards hardware store and a subsequent project put together by Kansas City-based Block and Co.

Six months ago, the Merriam City Council unanimously amended its Interstate 35 tax increment financing district to include the Kmart site.

That now allows the city council to consider and potentially approve public incentives for a redevelopment project at the Kmart site.

Although Drake expressed interest in the site at the time the I-35 TIF district was amended, city staff told the city council the move would not necessarily mean the council would have to approve a TIF deal specifically for Drake.

But the city’s community development director Bryan Dyer told the city council at that time that any developer would likely request public financing due to the site’s challenges.

The details of that plan remain unknown. Gant said the city only knows that Drake aims to share its vision for the site with the city sometime after the new year.

That is a change from comments Dyer made to the Merriam Planning Commission at its meeting just two days before, on Wednesday, Dec. 1, when he said that city staff did not expect movement at the Kmart site any time soon.

He told the planning commission then that the Kmart redevelopment “is not moving forward in a manner that we’d conceived.”

In turn, Gant told the Post via email on Thursday, Dec. 2, that Merriam’s “discussions with a potential developer for the Kmart site have tapered off.”

City staff at the time did not believe a planning application for the site would be submitted soon, she said.

But that seemed to have changed by Friday, when Gant confirmed that Drake did have interest.

Pennington, in his conversation with the Post Friday, remained adamant that an application for the site would be submitted sometime in January.