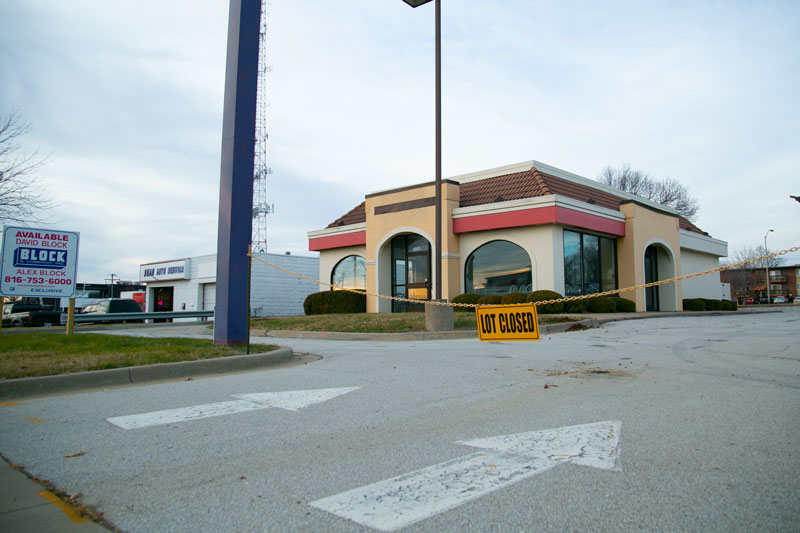 The former Taco Bell in Merriam at 8800 Shawnee Mission Parkway could become a Chipotle with a drive-thru. Developer Block and Co. is requesting tax increment financing to redevelop the lot, which would require the city council to amend the Interstate 35 Redevelopment District to create new project area "N." Above, the old Taco Bell.

The former Taco Bell at 8800 Shawnee Mission Parkway in Merriam could become a Chipotle with a drive-thru.

Merriam’s planning commission on Monday took the first step in moving the project forward by finding a proposed redevelopment plan to be consistent with the city’s comprehensive plan.

Taco Bell moved nearby to Ikea Way next to Jack in the Box in 2015. In recent years, a popular funnel cake truck has set up shop seasonally in the Taco Bell’s old parking lot.

The proposal for the Taco Bell’s former space on Shawnee Mission Parkway is from Kansas City-based firm Block and Co., which outlines $3.7 million in development costs.

The developer is requesting tax increment financing for the project.

A Columbia Capital Management financial analysis — found here in city documents — shows Block and Co. could be reimbursed up to $1.5 million for the project.

But the company’s plan calls for a maximum of $300,000 in TIF to be reimbursed in two installments, according to city documents.

The request for TIF would require the Merriam City Council to amend the Interstate 35 Redevelopment District.

A new project area — Project Area “N” — would need to be created and include only 8800 Shawnee Mission Parkway in order for the city council to consider the TIF request.

Merriam expanded the I-35 Redevelopment District just six months ago to include the former Kmart site in a new project area, “M.” The city council unanimously approved the expansion at that time.

This week, the planning commission unanimously found the proposed plan is consistent with the intent of the city’s comprehensive plan. The city council will consider the I-35 Redevelopment District amendment at its Dec. 13 meeting.

After the city council’s consideration on Dec.13, the planning commission will consider approval of the Taco Bell redevelopment site plan at its January meeting.