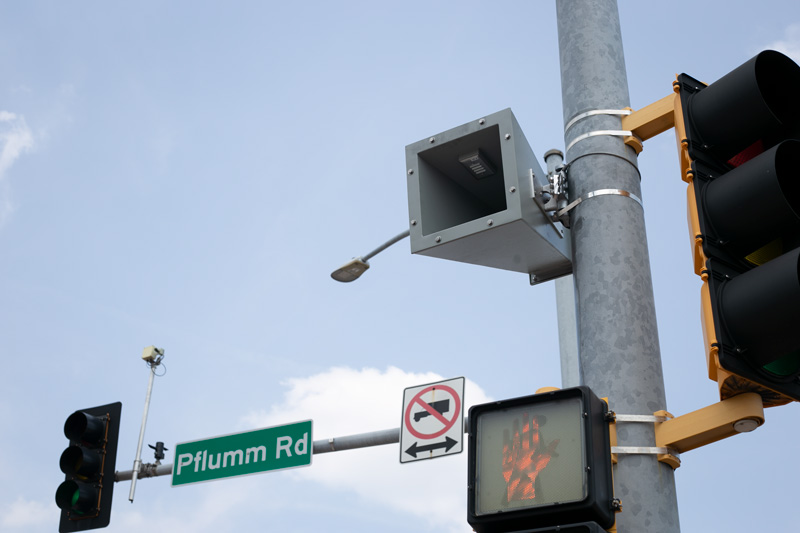 New wayside horns were installed in July at two railroad crossings near Old Town Lenexa and are now fully operational. Wayside horns emit lower volume, targeted train noises during crossings, precluding the need for trains themselves to blast their horns to alert motorists of their passage through an area. File photo.

Residents and businesses in and around the city’s historic downtown have long had to deal with trains blaring their horns as they rattle through the area.

Now, they’re benefiting from the installation of some long-awaited and much quieter wayside horns that alert folks of the daily trains passing through Lenexa.

The city of Lenexa on Wednesday confirmed that installation and testing of the new wayside horns at the Pflumm and Noland Road railroad crossings are now complete, and that the wayside horns are fully activated.

Wayside horns are in use in many other cities and emit a lower volume train sound targeted at motorists waiting at railroad crossings. That system precludes train engineers from having to blast their own much louder horns as they pass through.

Installation of the new wayside horns in Lenexa wrapped up in July, but the project took a few months from that time for testing, issuance of notices that the equipment was installed, among other steps in ensuring they were ready for public use.

Steve Schooley, transportation manager for the city of Lenexa, said city leaders and staff are excited that the wayside horns are now operational.

“We know the Old Town neighbors are looking forward to some peace and quiet and it is a great end-of-the-year treat for all Lenexa,” Schooley said.

In previous comments to the Post, Schooley said the wayside horns project was a long time coming.

The project had been in the works between the city of Lenexa and BNSF Railway since at least 2018, when the city and the railroad company completed the wayside horn tests that May.

“They have to start sounding their horns about a quarter mile in advance of the crossing, and they’re quite loud and very disruptive to day-to-day things that people do and running a business,” Schooley told the Post. “With the wayside horns, that sound will be focused and more concentrated right at the crossing as opposed to just spread throughout the area and will certainly be much less disruptive to folks in the area.”

About 18 trains pass through Old Town every day, according to crossing reports from BNSF Railway provided to the U.S. Department of Transportation.