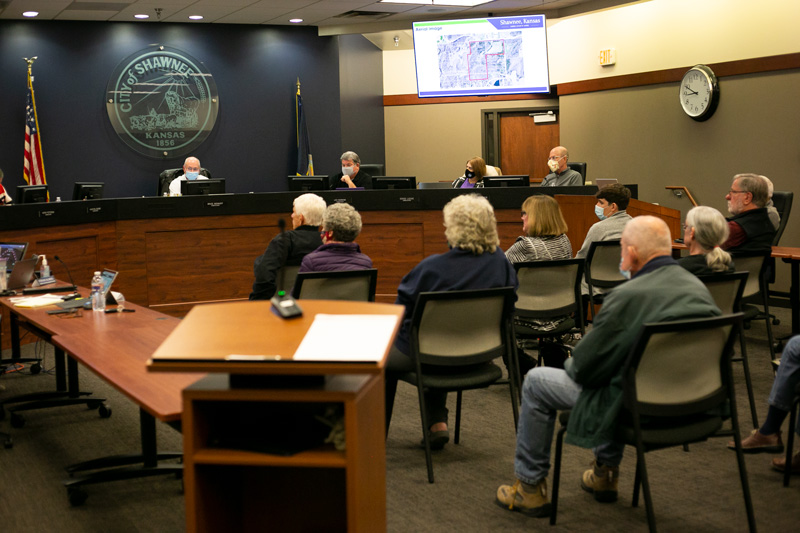 The city of Shawnee plans to add video livestreaming of all city council and planning commission meetings. Above, a Shawnee Planning Commission meeting earlier this year.

In an effort to increase transparency with the public, the city of Shawnee will soon use video to livestream its city council and planning commission meetings.

The Shawnee City Council on Nov. 22 unanimously agreed to hire SKC, a Shawnee-based audiovisual consultant, for $4,814 to install a camera that will show the entire council chambers in Shawnee City Hall.

City staff reported that including one video camera is a low-cost option and that the city would be able to add more cameras in the future, according to city documents.

Currently, the city airs live audio of the meetings, along with some video captured on Zoom. Full videos of meetings are recorded and later published on YouTube.

Some cities, including Overland Park and Prairie Village, do livestream most or all of the meetings of their city councils, council committees and planning commissions.

But other cities, including Merriam and Lenexa, do not. Merriam, like Shawnee has done up until now, records meetings and then publishes them to YouTube. Lenexa currently neither livestreams nor publishes archived meeting recordings.

The city council on Oct. 25 deliberated between the lower cost, one-camera option and a more expensive alternative that would have included multiple cameras and more comprehensive livestreaming support services.

City leaders ultimately decided that the lower cost option with one camera would be sufficient at this time.

“We think [it] really increases transparency in allowing people to get on and actually watch city council meetings and be engaged, so I think it’s a step forward,” said Councilmember Kurt Knappen. “We’re trying to do it for as low cost as possible.”

The video camera that will be installed in the council chambers will be located just above the entrance to the chambers in order to broadcast a live feed of the room, according to city documents.

Viewers will still be able to see items being presented to the city council and Shawnee Planning Commission on the television screens in the chambers.

A recording of the meeting at which the livestream vote was taken is below and on the city’s website. Discussion begins at 44:02.