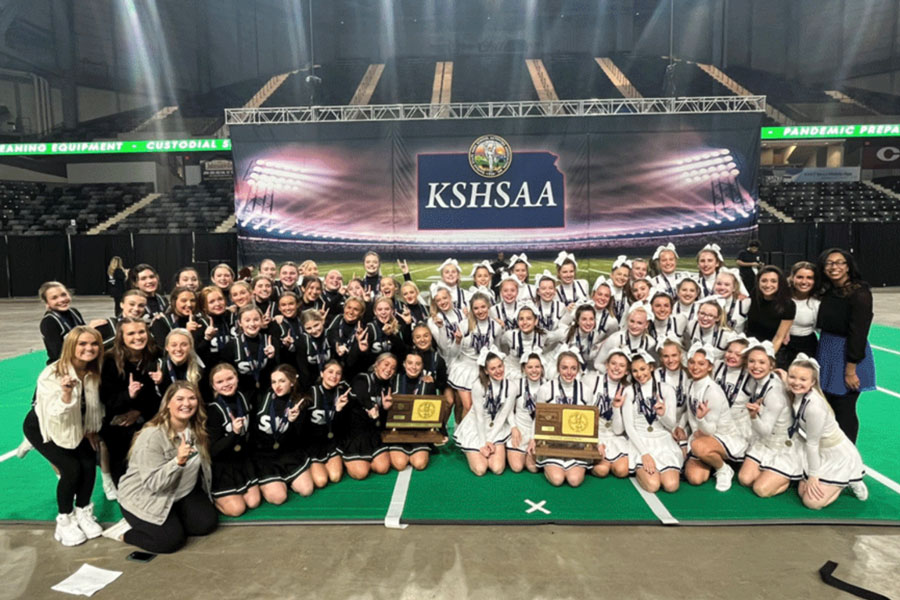 Squads from three Johnson County schools took home the gold at this year’s state cheerleading and dance championships, which were held last month.

In addition, Mill Valley High School in De Soto also won the state title in the 5A dance championship with their showcase.

For BV Southwest, it was a repeat.

“Two years in a row is quite a feat, especially since last year was virtual and then this year was in person,” Anne Kastelic, activities director for BV Southwest, said.

Due to COVID-19 restrictions, the cheerleaders were required by the Kansas State High School Activities Association to submit their routine via video last year, instead of performing live.

This year’s championship event was held over two days in late November in Topeka.

With this year going back to an in-person competition, Kastelic said, the team really wanted to go all out.

The routine used at the state meet, which the cheerleaders nicknamed “The Wolfpack” after the school’s mascot The Timberwolves, was something the BV Southwest cheerleaders had been working on since the summer.

A total of 31 students from made up the Timberwolves squad this year. Many of them were underclassmen and new to the team, Kastelic said.

In Class 6A, BV Northwest broke through to the top after taking home second place at last year’s state championship.

“I think that they did an excellent job with their preparation, making no doubts in their minds that they were ready,” Llewellyn said. “They were watching videos outside of practice and putting in work at home to make sure they were the best they could be.”

In the end, the hard work and dedication paid off for both of these squads.

“The girls and the coaches worked extremely hard,” Kastelic, the BV Southwest coach, said. “Their goal has been to go back and represent themselves and the school well, and they’ve certainly done that.”

Another competition that was favorable for Johnson County residents was the Class 5A state dance championship, in which Mill Valley High School in De Soto took home the title.

“We couldn’t do it without our amazing supporters and alumni cheering us on today,” the Silver Stars dance team wrote on their Facebook page.