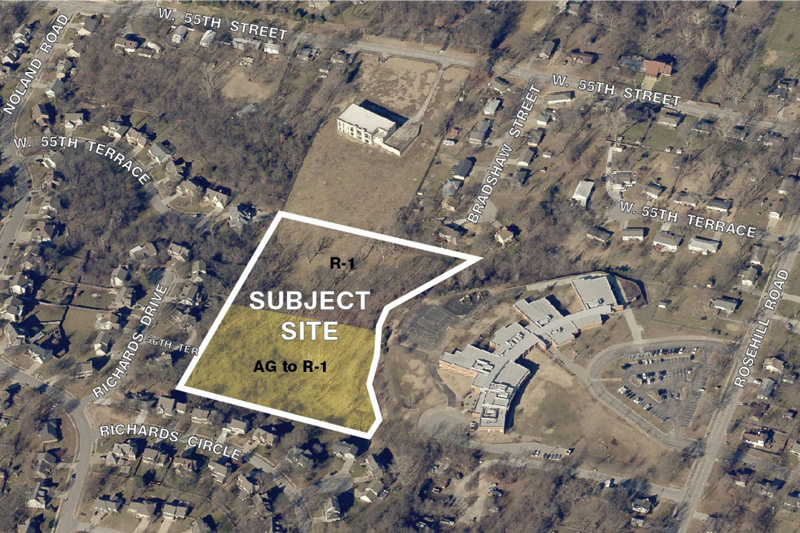 The Shawnee City Council on Nov. 22 approved rezoning a proposed residential project site near Pflumm Woods from agricultural to single-family. The developer, Aubry Enterprises, plans to add 13 homes as an extension of the neighboring subdivision, to the consternation of some neighboring homeowners who submitted a valid protest petition against the project. Above, an overhead view of the project site. File photo.

Shawnee city leaders have advanced plans for a residential development next to the Pflumm Woods neighborhood, overriding a protest petition filed by some nearby residents.

Located on about 7 acres in the 13000 block of West 56th Terrace, Northern Hills is a proposed single-family subdivision that will feature 13 homes once built out. Heading up the project is Aubry Enterprises.

After some deliberation, the Shawnee City Council on Nov. 22 voted 7-1 to approve rezoning the site from agricultural to single-family residential. Councilmember Eric Jenkins, who lives in the Pflumm Woods neighborhood next to the project site, cast the lone dissenting vote.

City staff and Bob Johnson, an attorney with Polsinelli who is representing the developer, said the project site has long been considered a future site for single-family residential development as an extension of the Pflumm Woods neighborhood.

Neighboring homeowners submitted a valid protest petition, which meant the city council needed seven votes in favor of the project in order for it to pass.

A handful of residents have spoken against the project, but no one from the public spoke Nov. 22.

Their primary concerns raised in previous meetings related to worries about construction traffic, the potential for noise and disturbances in their neighborhood and the loss of natural green space.

Johnson said the developer plans to preserve green space to create a buffer between the neighborhoods.

In July, the Shawnee City Council heard neighbors’ concerns and remanded the item to the city planning commission for further consideration, focused particularly on how construction trucks would gain access to the site and minimizing the disturbance to the surrounding neighborhood.

The Shawnee Planning Commission earlier this month sent the item back to the city council with a recommendation to approve the project.

Some councilmembers cited the history of the area as a future designated site for single-family homes and said the developer would probably have a strong case in the court of law to sue the city if the city council denied rezoning for the project.

“We don’t have a blank check to just say no to something; we have specific reasons, as Mr. Johnson outlined, and I agree with his interpretation on most of those,” said Councilmember Mike Kemmling. “I do feel like single-family homes in a single-family neighborhood fits the character. I do see the hardship with the construction and some extra traffic, but, by and large, I don’t think I could deny the request and then successfully defend it in court.”

A recording of the meeting is below and on the city website. Discussion begins at 49:09.