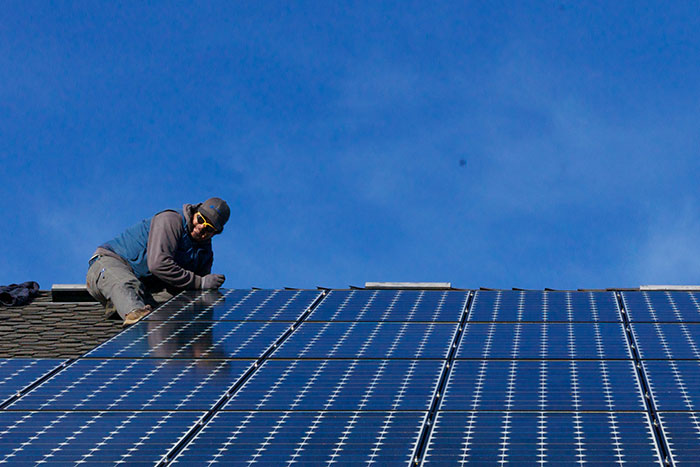 A study conducted by Kansas City-based Dynamhex found the city of Prairie Village emitted more than 225,000 metric tons of greenhouse gas emissions in the last year. Nearly half of the recorded emissions came from residential buildings, the report concluded, which could be reduced with improved insulation and more installation of rooftop solar panels, like the array above. Image used under a Creative Commons license.

The city of Prairie Village emitted more than 227,000 metric tons of greenhouse gas emissions in 2020, according to the city’s first-ever study of its overall carbon footprint.

Last year, Prairie Village entered an agreement with Kansas City-based Dynamhex to track the city’s greenhouse gas emissions — with the goal of ultimately using that data to come up with ways to reduce emissions.

Prairie Village along with Roeland Park are the only Johnson County cities so far to get such an emissions report.

Prairie Village’s governing body on Nov. 15 heard about the results for the first time from data collected in 2020 from Dynamhex Chief Executive Officer Sunny Sanwar.

Dynamhex looked at the burning of fossil fuels, generation of electricity and the use of fuels like natural gas for the study.

The company broke the findings into two separate reports, one outlining total community-wide emissions and another focused more particularly on emissions produced by the city’s own operations.

In the community-wide report, residential buildings accounted for nearly half of the 227,410 metric tons emitted in Prairie Village during the time measured, according to Dynamhex’s report.

A significant portion of residential emissions — 30% of the total — came from electricity generation, according to the report.

In comparison, Dynamhex reported that the much smaller city of Roeland Park produced 55,117 metric tons of greenhouse gases in 2019.

As in Prairie Village, residential buildings in Roeland Park also accounted for about half of that city’s greenhouse gases emitted in 2019.

Community wide, the study says transportation in the form of on-road vehicle emissions, made up 28% of the city’s emissions total. Emissions from commercial and industrial buildings made up a combined 23%.

The separate report that focused on the city’s operational footprint detailed emissions from city-owned buildings and vehicles and concluded that city operations produced 2,314 metric tons total.

More than half of the city’s footprint, 67%, comes from municipal buildings, according to the report. Fleet vehicles and staff commuting account for the other 33% of the municipal footprint.

Dynamhex’s suggestion for the city is to create new solar projects and “building-level efficiency measures,” both of which could result in an 8% total reduction, according to the report.

Additionally, as the region’s utility provider Evergy works to reduce its own power’s carbon content by increasing their renewable energy share, the city’s footprint — both for community-wide and city-specific emissions — will decrease, according to the report.

Residents can check out household footprints

The governing body and Dynamhex will continue to work out the details of the proposed solutions for both the community footprint and the municipal footprint.

In the meantime, residents and business owners can take a look at their own carbon footprint online here. Tutorials on how to use the interactive map can be found here.

Councilmember Courtney McFadden said she’s had issues with the interactive map despite following the tutorials. Sanwar said he’d look into the issues and address them with the city at a later date.

The city council did not take any formal action on the item as it was a presentation. No decisions about continuing with the partnership with Dynamhex were made during the meeting.

The report says that Dynamhex “allows for continued measurement and evaluation” of emissions levels.