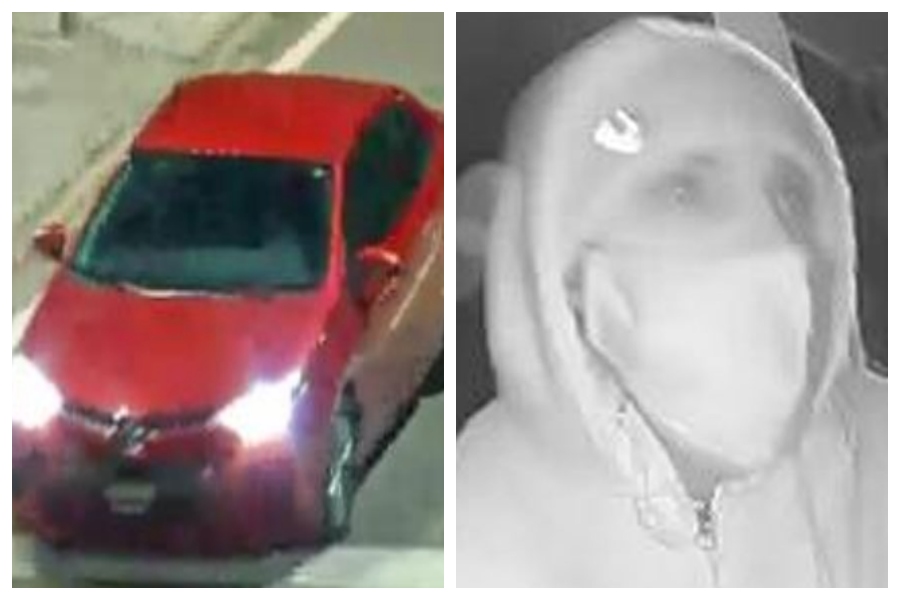 Shawnee Police released an image of a red Toyota Corolla, left, they say is linked to two armed robberies in western Shawnee earlier this month. A previously released image caught on a resident's doorbell camera shows one of four suspects wearing a hoodie and face mask. Images courtesy Shawnee Police.

Investigators say they are looking for a red Toyota Corolla in connection with two attempted armed robberies that occurred in western Shawnee earlier this month.

Shawnee Police released an image of the suspect vehicle on Saturday.

In a release, Maj. Jim Baker said the Corolla has a Legends Toyota advertisement plate on its front license plate holder.

Initially, after the incidents occurred early on the morning of Thursday, Nov. 18, the suspect vehicle was described as a red Chevrolet.

In addition, investigators on Saturday released a new image of one of the suspects in the robberies which Backer said was “located on security footage.”

The suspect “appears to be a light complected male with thick dark hair,” Baker said in the release.

That image goes along with a previously published image captured by a doorbell camera that shows one of the suspects wearing a face mask and hoodie.

Police say that four suspects with guns attempted to rob a man in the driveway of this home in the 5200 block of Findley Street around 4 a.m. on Thursday, Nov. 18.

Recorded radio traffic states that all four suspects were wearing face masks, and two of them were carrying handguns. The victim was struck in the head with a handgun but was able to return to his house.

All the suspects left in a red car.

Officers were investigating the first robbery attempt when they heard gunshots several blocks away at about 5:25 a.m.

Recorded radio traffic indicates officers were then called to a home in the 5200 block of Meadow Lark Drive, a few blocks to the west of Findley Street.

The second caller reported that a front window of the house had been “shot out,” and the suspects again fled in a red passenger car.

Nobody was injured in the second incident.

Police ask residents of the area to check their security cameras for any possible footage of these suspects.

Anyone with information is encouraged to is asked to call the Shawnee Police Department at 913-631-2150 or the TIPS Hotline at 816-474-TIPS.