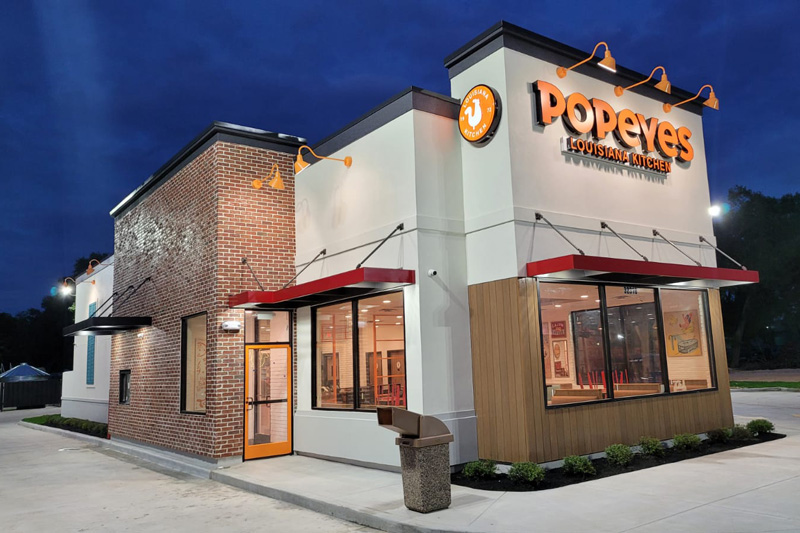 A new Popeyes Louisiana Kitchen franchise got the stamp of approval this month from the city of Lenexa. The new location will be on Quivira Road near Oak Park Mall. Above, a design of the new look for the Popeyes franchise.

Lenexa has advanced preliminary plans for Popeyes Louisiana Kitchen coming to the shopping area at 95th and Quivira near Oak Park Mall.

Located at 9460 Quivira Road, the vacant Burger King restaurant will be demolished and reconstructed as a Popeyes fast food restaurant with a drive-thru, according to city documents.

After a brief presentation and discussion, the Lenexa Planning Commission on Nov. 1 voted 8-0 to approve preliminary plans for the new Popeyes restaurant. Commission Chair Chris Poss was absent.

The infill redevelopment project involves replacing the Burger King restaurant, which was built there in 1977, according to city documents.

The new building will be about 2,400 square feet in size, and a total of 56 parking spots will be available on site.

Project plans may include improving access and connectivity on Quivira Road in the future.

Commissioners earlier this month had mostly positive comments for the project as a great re-use for the site. However, some commissioners discussed possible concerns with traffic flow, particularly the addition of two-way traffic around the restaurant alongside the drive-thru lane.

Clay Cristy, a representative of the project, said they intend to provide good circulation through the site.

Additionally, he said they want to make sure employees are not parking in “prime spots” for customers.