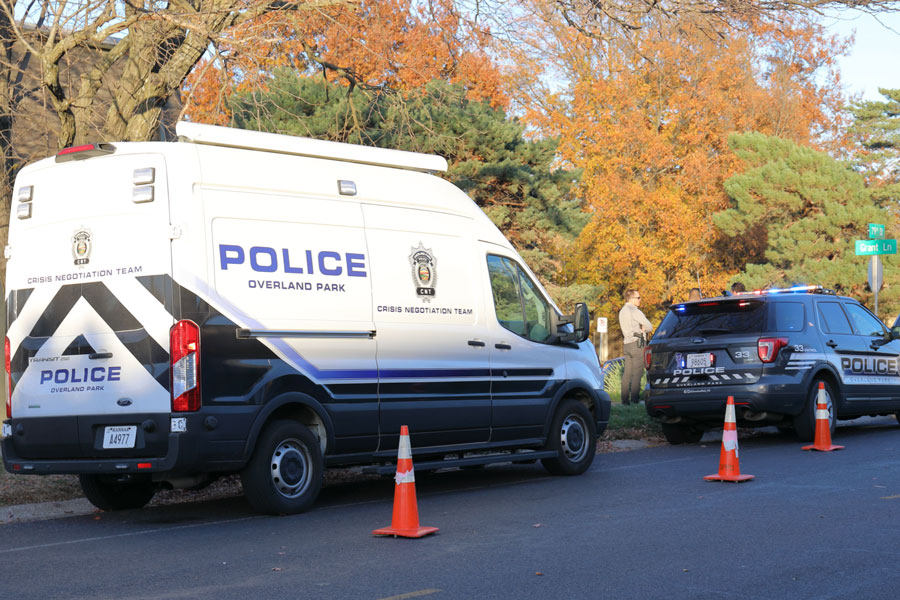 Overland Park Police's Crisis Intervention Team, along with tactical officers and an armored vehicle, responded to reports of a man barricading himself inside an apartment near 79th Street and Grant Lane Tuesday afternoon. The man was eventually taken into custody. No injuries were reported. Photo credit Mike Frizzell.

Recorded radio traffic indicates that officers responded to The Village Apartments near 79th Street and Grant Lane at 12:20 p.m.

A woman walked into the Myron E. Scafe Building, one of the department’s stations located at 8500 Antioch Road, alleging that a man “punched her, slapped her, and held a gun to her head” in the apartment.

The man was said to still be inside the apartment.

“It was a subject that barricaded himself,” Captain Steven Edwards said. “We were out there to take him into custody, and we resolved it peacefully.”

Edwards did not elaborate on the reason for the man’s arrest, only saying, “it was a probable cause arrest.”

Radio traffic indicates that tactical officers, along with an armored vehicle and the department’s Crisis Negotiation Team all responded to the area around 1 p.m.

The man, only identified as a 25-year-old resident of Junction City, Kan., surrendered to officers around 4 p.m.

His first court appearance is scheduled for Wednesday afternoon.

Captain Edwards says no one reported any injuries.