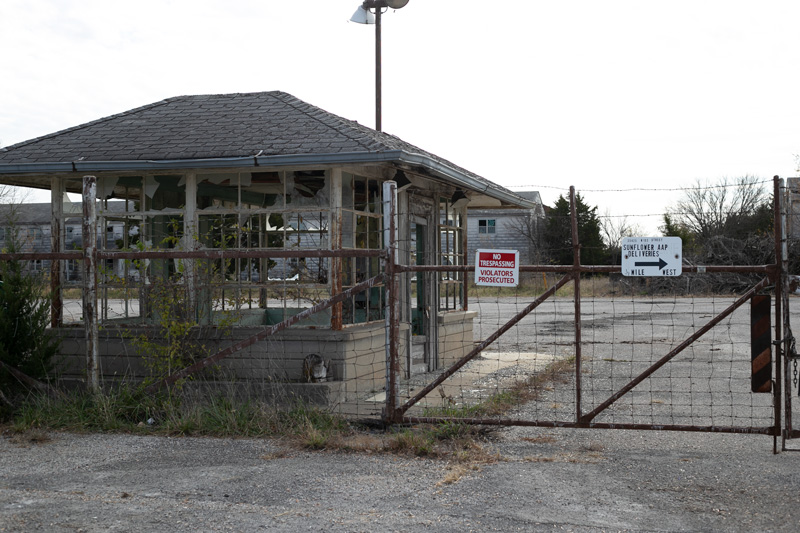 The Sunflower Army Ammunition Plant near De Soto in western Johnson County closed in 1992 and has been undergoing cleanup in the decades since. A Kansas City-based renewable energy company, Savion, is now looking into the site as a potential new solar farm. Above, the gated entrance to the former plant, which remains closed off to the public. Photo credit Leah Wankum.

A Kansas City-based solar energy company is exploring the idea of developing a solar farm on the defunct Sunflower Army Ammunition Plant in De Soto.

Savion, LLC, a privately-held company that specializes in utility-scale solar power and storage, has begun reaching out to landowners and local officials in an attempt to determine if the idea is feasible, according to Savion’s media spokesperson Kelly Cooper. But because the idea is still in its infancy, the company is not ready to share more details.

However, a company official did recently weigh in with county planning commissioners who are trying to write regulations for what would be a new industry for the county.

Florida-based NextEra Energy is already working on plans for its West Gardner Solar project that could top 2,000 acres and spread through parts of western Johnson County and eastern Douglas County.

It was NextEra’s interest that spurred county officials to begin considering what kind of zoning, setback and screening rules will be needed for such solar farm projects.

Those regulations are still in the works, but Savion expressed concerns about the limits on permits, acreage and setback distances from city limits that are under discussion.

Savion’s interest in the Sunflower plant is a new turn of events for an area near De Soto that has been undergoing cleanup from years of contamination.

The plant was built in 1942 to supply ordnance for World War II. Its use declined through the years following the war until issues with contamination closed it permanently in 1992.

Since then several ideas have been discussed.

In the early 2000’s a developer proposed a Land of Oz theme park and resort, and the Shawnee Tribe of Oklahoma also tried to reclaim the land.

Both those efforts failed and another for private development of shops and parks never came to fruition. Meanwhile it may be years before the campus is fully cleaned up.

Savion officials said some of the regulations being discussed were not reasonable for a solar project. But if those limitations are approved, the planning commission should consider allowing an exception for solar facilities situated on “brownfields,” which were defined as former industrial or commercial sites that have contamination issues.

In a letter to the planning commission, Emily Truebner, a Savion executive, said the length of the conditional use permit being considered for solar farms is too short.

The proposal for a 20-year permit is not reasonable because solar equipment generally lasts more than thirty years, she wrote, adding that the shorter term would be a hindrance for companies under long-term contracts to provide power.

Instead, Truebner suggested a 40-year term.

The draft proposal also sets a maximum extent of the project of 2,000 acres. Truebner’s letter asked for more flexibility and a case-by-case consideration because acreage requirements for solar facilities also depend on connections to transmission stations.

The company’s suggestion was for four square miles, which comes to 2,560 acres.

Another proposed rule requires solar farms to be located more than one and a half miles from any city limits, with some exceptions for small annexed areas.

But the letter asked for a “brownfield” exception because the former ammunition plant is just outside De Soto city limits and has thousands of acres of land that has significant solar potential.

Given the United States’ energy goals of retiring coal-based energy in favor of renewable energy, planners should consider the specific needs of solar energy production, the letter said.

“Solar energy is one of the fastest ways to reduce carbon emissions and put the country on a path to a clean energy future,” Truebner wrote.

Savion is part of the Green Investment Group portfolio and was founded in 2019.

It currently has 87 solar projects in development in 27 states, according to the company’s website.