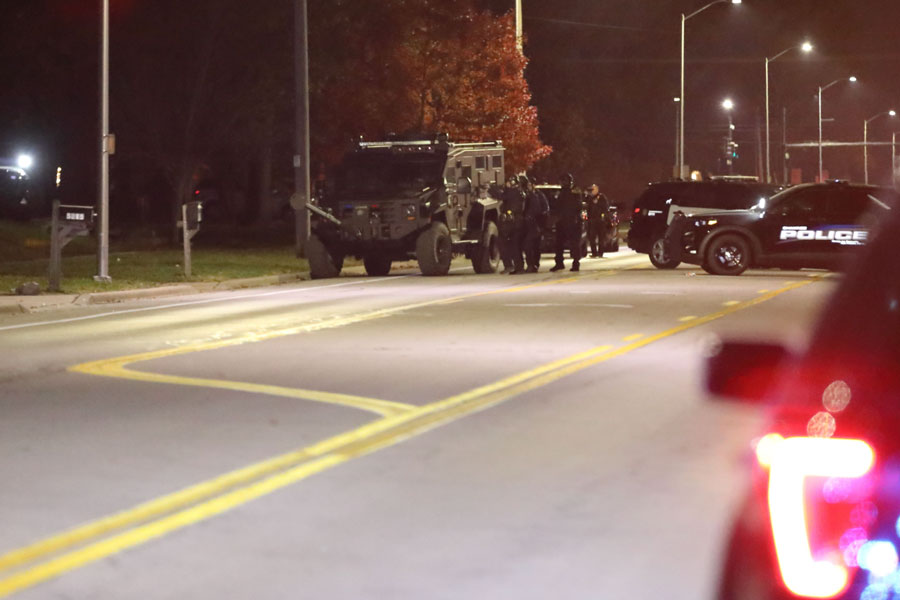 Tactical officers lined up beside an armored vehicle with the battering ram affixed to its front bumper as they approach a house in western Shawnee overnight Saturday. Police received multiple reports of gunfire coming from inside the house, and a man was arrested after a nearly five-and-a-half hour standoff. Photo credit Mike Frizzell.

Segura is set to make his first court appearance at 1:30 p.m. Monday. He has no prior criminal cases, according to a search of court records online.

A Shawnee man was arrested after a nearly five-and-a-half hour standoff Saturday night.

Captain Steve Walsh, a spokesperson for the Shawnee Police Department, says officers were called to investigate an armed disturbance at a house in the 5200 block of Woodland Drive in western Shawnee just after 8 p.m.

Recorded radio traffic indicates that multiple neighbors called 911, reporting the sound of gunfire coming from inside a house.

A family member also called 911, saying that the shots were being fired into the ceiling.

“Officers responded and heard additional gunshots from within a residence,” Walsh said in a news release.

Two family members of the suspect were inside the house and were quickly evacuated when the department’s tactical team arrived.

Tactical officers used Shawnee’s MRAP (or Mine-Resistant Ambush Protected vehicle) and a Bearcat, another armored vehicle, from the Lenexa Police Department to safely approach the house.

A battering ram affixed to the front of the Bearcat was used to smash open the front door and multiple windows.

Officers made announcements over their PA speakers asking the man to come outside and later asking him to answer the phone. The man did not respond to any of the messages.

Woodland Drive was closed from 52nd Street to the 5400 block as officers worked to get the man out of the house. The road reopened around 3 a.m.