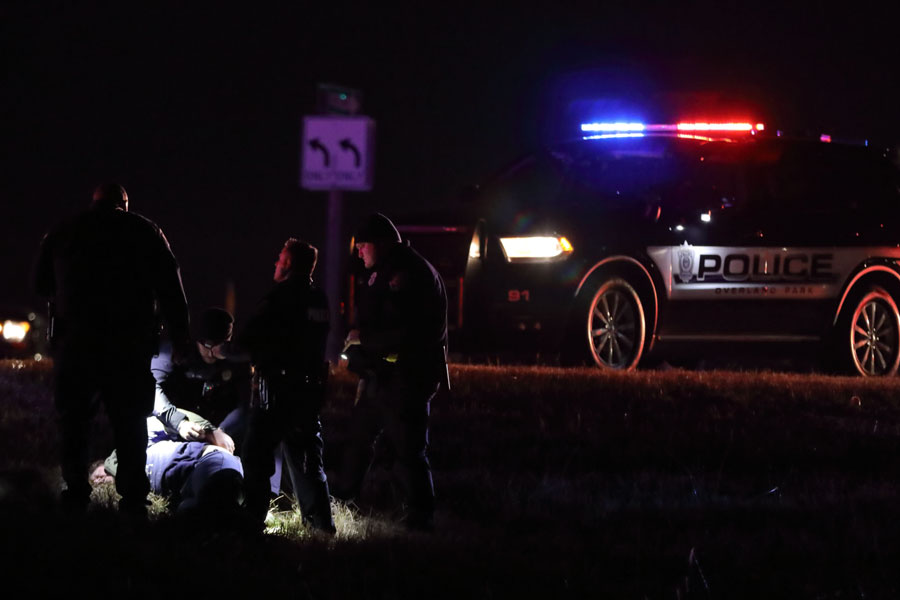 Police officers from Olathe and Shawnee take a man into custody on the east side of the ramp from northbound Interstate 35 to 75th Street following a chase along the highway that reached 100 miles per hour at times. Photo credit Mike Frizzell.

Olathe officers attempted to make a traffic stop on a white and black Dodge Dakota pickup truck about 11:04 p.m. after an officer saw the truck driving northbound in the southbound lanes of S. Clairborne Road.

The driver refused to stop and accelerated onto northbound Interstate 35 from Santa Fe Street.

Recorded radio traffic from pursuing Olathe officers states that the truck was driving 90 to 110 miles per hour at times. The driver exited to 87th Street in Lenexa and made a U-turn at Nieman Road, returning to northbound I-35.

“We were able to hit at least one tire, maybe more,” Chavez said in an emailed response to questions.

According to recorded radio traffic, the suspect truck split the spike strip and dragged half of it. The other half was thrown into the northbound lanes of the interstate, causing damage to a tire on one passing vehicle that was not involved in the pursuit.

The chase continued north on I-35 until the driver could not keep the truck on the road and drove into the ditch just south of the 75th Street bridge.

The driver then took off running to the east, with officers in pursuit.

Officers quickly caught up with and arrested the man on the ramp from northbound I-35 to 75th Street. A woman, who was a passenger, was detained at the site where the truck drove off the highway.

Police from Overland Park, Merriam, Shawnee, along with a motorist assist vehicle from the Kansas Highway Patrol, all responded to the crash and arrest scenes.

The Lenexa Fire Department and Johnson County Med-Act responded to check both involved suspects for injuries.

Both sustained minor injuries in the crash, and the man claimed chest pains after the foot chase and his arrest. Both were transported to area hospitals by ambulance.

Sergeant Joel Yeldell, a spokesperson for the Olathe Police Department, says the man was arrested and is being held on felony drug and weapons charges.

The man was booked into the Johnson County Sheriff’s Adult Detention Center shortly after 6 a.m. Saturday.