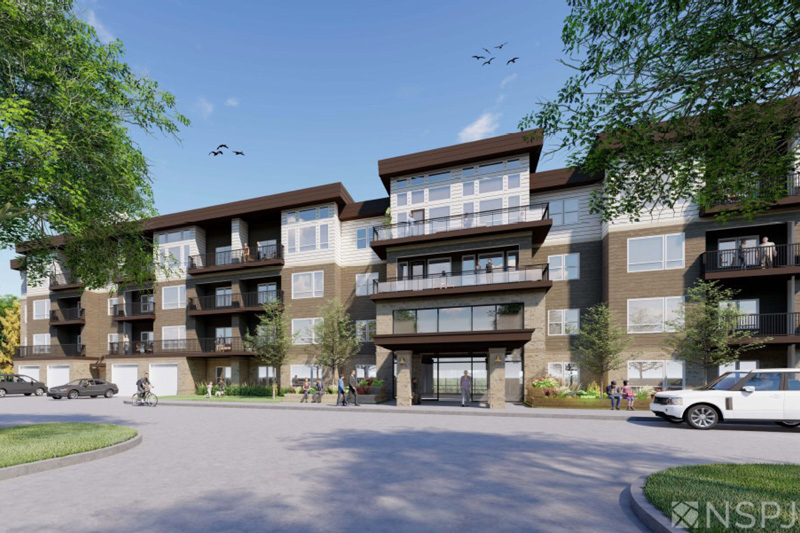 The developer of The Retreat on the Prairie, Lane4 Property Group Inc., is tapping into public financing to help pay for construction of the mixed-use development at K-10 Highway and Ridgeview Road. Over a 20-year span of tax increment financing agreement approved by the city, the developer will receive 60% of TIF-eligible property tax revenues generated by the development. Above, a design rendering of the development.

Developers of The Retreat on the Prairie, a mixed-use residential and commercial project coming to Ridgeview and K-10 Highway, will be able to tap into public financing to help pay for it.

Located on the northwest corner of K-10 and Ridgeview Road, the development comprises five retail buildings on 15 acres, along with five apartment buildings on about 25 acres.

The Lenexa City Council on Tuesday voted 7-0 to approve public financing for the development, including establishment of tax increment financing, or TIF, as well as a community improvement district.

Councilmember Tom Nolte recused himself from voting and discussion, citing a conflict of interest. There was no public comment during a hearing on the matter.

The Retreat on the Prairie includes construction of the following:

Lane4 Property Group Inc., the developer, and the city of Lenexa are eligible to receive reimbursements for certain improvements made on the site of The Retreat on the Prairie.

Funds from the tax increment financing package come from property taxes that are generated on the site, which is part of the Ridgeview Mining TIF District. The city established this TIF district in 1997, according to city documents.

City staff estimate the TIF area for The Retreat on the Prairie will generate about $34.2 million in property taxes over the 20-year term.

Private improvements will be made on behalf of Lane4, and any TIF increment generated from the project will be used to reimburse Lane4 for TIF-eligible costs, for things like construction of commercial and residential portions of the project.

During the 20-year term of the tax increment financing plan, Lenexa is also entitled to receive the balance of the TIF-eligible costs for public improvements, which include things like right-of-way acquisition, asphalt pavement and sidewalks, curb and gutter, storm drainage and sewer extensions, and street lighting as well as public parks.

Pursuant to a development agreement between Lane4 and the city, Lane4 will receive 60% of the TIF revenues, while the city will receive the remaining 40%.

The development agreement has some provisions, including those that say:

What’s in the community improvement district

Meanwhile, the city has established a community improvement district (CID), which allows the developer to be reimbursed for CID-eligible costs associated with The Retreat on the Prairie.

Lane4 will receive 100% of the CID revenues generated from the community improvement district, to reimburse those CID-eligible costs, up to a maximum of about $2.7 million.