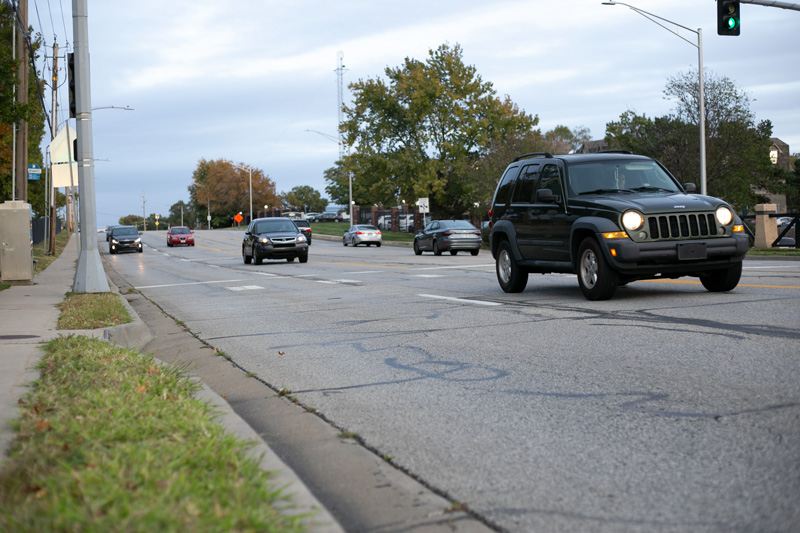 The city of Shawnee is planning major upgrades along 75th Street, from Switzer to Quivira. The $4 million project includes walkability improvements and beautification elements, along with road resurfacing in that stretch of four-lane road. Photo credit Leah Wankum.

Plans to improve a key section of West 75th Street through Shawnee will soon be underway.

The city is planning to upgrade 75th from Switzer to Quivira. The $4 million project includes walkability improvements and beautification elements.

In a few public meetings late last month, city staff provided updates on the status of the project as well as an overview of its details.

Here’s a look at what’s coming to that stretch of 75th:

The Re-imagine 75th Street project consists of many elements that incorporate trafficway improvements, walkability and addition of a privacy screen wall near 75th and Nieman.

Project design and layout plans include:

Project manager Cody Wilbers said the goal to build the screen wall is to limit views of a natural gas facility run by Southern Star.

The city is working on an agreement with the gas company to help pay for the wall.

Mid-America Regional Council, Transystems and the city completed a study of the corridor some time ago, according to the city of Shawnee. The design and construction plans incorporate some elements that were recommendations from the study.

Wilbers said the city has a few ideas for murals and designs that will be placed on the screen wall. Once built, the wall will be eight feet tall in most places, but a few sections where the designs will be placed will be 10 feet tall.

The current phasing plan starts at Switzer and works its way westward toward Quivira. Here are the phases:

Wilbers said that after the first phase, the city will require the roadway to be open to two lanes of traffic each way between 4 p.m. and 9 a.m. in order to alleviate congestion.

Additionally, the Nieman intersection while under construction will be completely shut down on the weekend, from 6 p.m. Friday to 6 a.m. Monday.

Utility relocations are already underway and should be complete through the middle of 2022. The city will approve final design plans this month, while construction should begin in March 2022 and wrap up in the fall.

A recording of the meeting is available below.