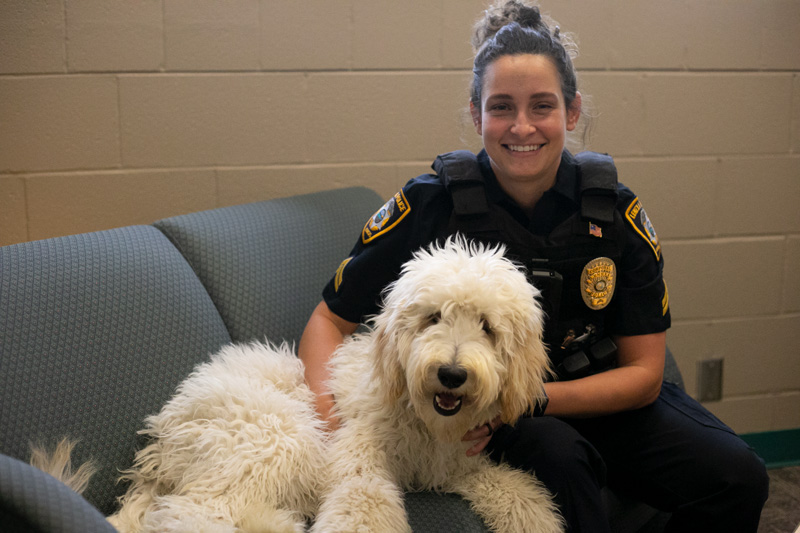 Since joining the Lenexa Police Department in June, Lexi Blue, a golden doodle, has visited with hundreds of community members, including elementary students, shoppers at the Lenexa Public Market and teens grieving the loss of a classmate. Above, Lexi with her handler, Cpl. Megan Larson.

The newest officer at the Lenexa Police Department hasn’t been sworn to protect, doesn’t write tickets and isn’t even human.

Nonetheless, Lexi Blue — a golden doodle — has been hard at work serving as the police station’s first-ever comfort dog.

Since joining the department in June, Lexi has visited with hundreds of community members, including elementary students, shoppers at the Lenexa Public Market and teens grieving the loss of a classmate.

And already, police officers have noticed a difference.

“It’s been really good; we’ve had overwhelming support, not only within the police department but in the community,” said Cpl. Megan Larson, Lexi’s handler and a school resource officer at five elementary schools in Shawnee Mission and Olathe school districts. “Lexi has just been a great addition to the department. Obviously, she brings smiles to everyone’s faces. She makes everyone feel better.”

Originally from a breeder’s in the Topeka area, Lexi turns seven months old this month.

She’s not trained to find people, evidence or drugs. And she’s not undercover or anything like that. Instead, her assignment is to bring joy to those around her, boosting officer morale and making friends within the community.

When Chief Dawn Layman took on her new role leading the department at the start of 2021, she noted that getting a comfort dog for the police department was a priority.

“It’s cool having a dog around; let’s just call it what it is,” said Officer Danny Chavez, public information officer. “In the old days, it’s like a station dog, we call, like a mascot. The modern take on that is a comfort dog. Even before we could identify in this industry what a critical incident was, I think it just boosts morale to have a pet around.”

Chavez said having a dog around is particularly helpful for police officers who constantly respond to traumatic situations over and over again.

“You do that time and time again, and it just wears on you,” he added. “It’s hard to measure what having a comfort dog around means. It doesn’t fit on a table or a chart… but we believe that it is meaningful.”

Lexi often hangs out at the station and visits the other police officers, as well as dispatchers and public service officers.

She also serves out in the community, particularly victims and families in the aftermath of a critical or traumatic incident or after a significant crime has occurred.

“If our detectives are interviewing someone and they need a break, they can come visit Lexi and take a break from that,” Larson said. “Sometimes it’s hard to talk about things that happened to you and kind of relive that, so she’s here for them. She’s also here for us, when we have to talk about that stuff, too, and relive that incident as well.”

Larson, who has served at the Lenexa Police Department for 10 years, said she and Lexi’s second handler, public service officer Kate Magee, see how Lexi’s visits to the various departments uplift everyone at the station.

“Lots of times, we have to debrief what we call critical incidents or traumatic incidents, and so when we have to talk about that, that’s hard for us too, so that’s a time where she can come in and be a distraction or maybe lighten the mood a little bit,” she said.

After Izzy Ford, a 16-year-old St. James Academy student, died in a car accident a few months ago, Lexi came to visit the school and spent the whole day with the students and faculty.

She also attended Ford’s visitation at the school.

“She actually did a lot of good that day,” Larson recalled. “There wasn’t a whole lot of structure to the day. The staff kind of let the students grieve in their own way. So she went to a couple different areas in the building, and I just stood back and took her off leash for a lot of the time, and they played with her and pet her. And she brought a lot of smiles to a lot of kids’ faces who otherwise probably wouldn’t have been laughing or smiling.”

Lexi also often acts an ice breaker to bridge connections with members of the community, especially little children, who may feel intimidated or uncertain around police officers.

Lexi is still rather young, so eventually she will receive some type of comfort dog training, Lenexa police officials say.