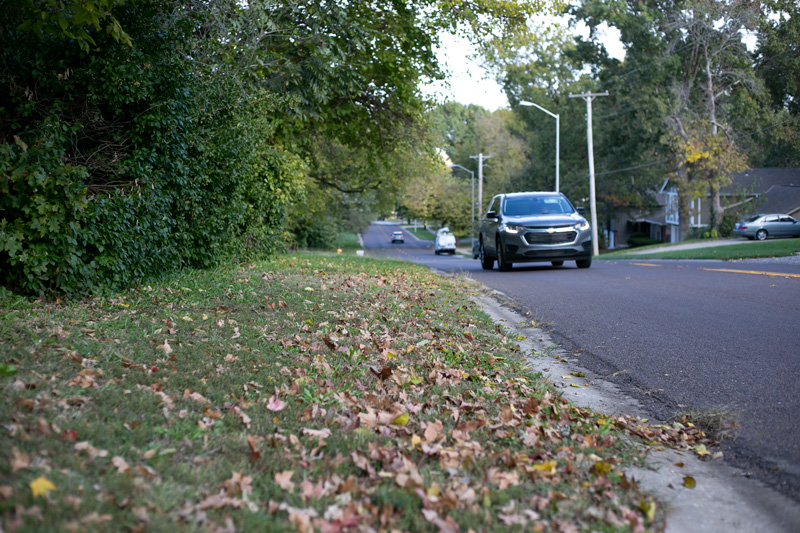 An Overland Park city council committee recently approved moving ahead with bids for two long-anticipated projects, including starting a bike/pedestrian trail along 91st Street, above. Bids for that project came in significantly over original estimates but will get federal and state funding. Photo credit Leah Wankum.

Two construction projects that have long been in the works for Overland Park — a fence replacement at Westlinks golf course and a bike/pedestrian trail along 91st Street — are turning out to be substantially more costly than engineers originally estimated.

Nevertheless a city council committee unanimously approved going ahead with both projects recently, directing city staff to find savings where it can.

The low bid on a new fence around a portion of the city-owned Sykes/Lady golf course came in roughly 30% higher than original cost estimates, with a low bid of $34.39 per linear foot compared to $26.50 originally estimated.

But replacing the fence, with the help of some payment from the course’s neighbors is intended to bring closure to a long-running feud between the city and residents of the Nottingham by the Green subdivision, which abuts it near 125th Street and Quivira Road.

The dispute dates to 2013, when residents of the upscale neighborhood charged that the city had not taken adequate care of a wrought-iron fence that separated their homes from the course. The fence was put in by a developer but was owned by the city along with the course.

Neighbors demanded a replacement fence comparable to what they had. City officials balked at the cost, suggesting instead a chain link fence or no fence at all.

The argument reached a stalemate for the better part of six years, until talks began again shortly before the pandemic.

The bid arrangement voted on Wednesday by the city council’s Community Development Committee was the culmination of a deal in which the city would remove the old fence — including 4,500 posts — and split the cost of new, similar fencing with the homeowners.

After that, the fence maintenance would become the homeowners’ responsibility.

Neighborhood representative Eleanor “Snookie” Krumbiegel said she was happy with the way the issue was settled.

“It was a long journey, lots of issues came up but you know we all worked through it,” she said.

Committee Chairman Fred Spears said, “I’ve been working on it for over six years, and it’s great to have it come to fruition and be done to everybody’s satisfaction.”

The committee gave its approval with little other discussion.

“I will be looking forward to not seeing this ever again,” Spears said, after thanking the participants.

Meanwhile, the 1.5-mile bike/pedestrian trail planned along 91St Street, running from Cherokee Park to Meadowbrook Park, is another long-standing project that came in substantially higher than budgeted.

The link has been talked about since the 1990s with planning getting underway as the pandemic hit.

All three of the competitive bids on that project came in significantly higher than the city’s estimate of $1.8 million. The low bid was $2.26 million, with the city already having spent $265,000 for right-of-way and $170,000 for design.

That project will receive $800,000 from the Kansas Department of Transportation and another $475,000 from the federal government.

State and federal funding complicates things, according to city documents. Cancelling the project would mean reimbursing KDOT for any expenses it incurred.

After brief assurance that it qualified, the committee decided to use funds from the American Rescue Plan Act, the latest federal COVID-19 relief bill signed into law earlier this year, to add $407,000 to the future budget of this project.

The action puts the trail in the five-year capital improvements plan and does not set it immediately in motion.