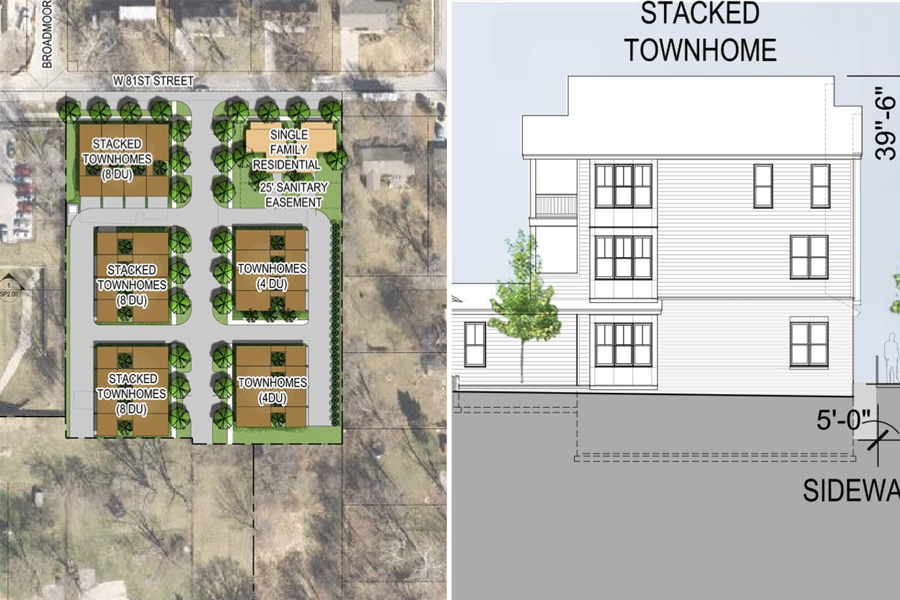 Plans for a small townhouse development just east of downtown Overland Park cleared an early hurdle Monday with the city planning commission’s decision to allow rezoning that would allow a change in the city’s regulating plan that governs streets in the area.

Applicant Jamie Mahoney has submitted plans for 32 multi-family units and two single-family homes on 2.14 acres at 6901 and 6815 W. 81st Street, about a block east of Metcalf.

The development would require a new north-south public street and the removal of two existing homes.

If approved, the development would be built on a rectangular lot with the new street bisecting it down the middle.

The plan is in the early stages, but it envisions three separate three-and-a-half-story stacked townhomes on the west side of the new street, with eight units per building.

The lower buildings to the east are intended to create a transition to single-family homes on that side, according to the developer’s documents. Parking would be in rear garages.

The development is only about a block east of downtown, in a part of the city that has been seen as a transitional zone between high-rise apartments and single-family homes.

It is near the recently-built Avenue 80 and Avenue 81 apartments on Metcalf Avenue.

There has also been concern among elected officials about the availability of more attainable housing for wage earners. However, there was no indication of the price points for the proposed townhouses.

The project is about a block south and similar in scope to one proposed in 2019 for four row houses at 6800 W. 80th Street. That project also included a bisecting street down the middle.

The earlier project received some neighborhood resistance about density, traffic and setbacks. But no neighbors took issue with this latest townhouse plan during the commission’s meeting Monday.

Planning commissioners voted unanimously in favor of the rezoning but noted the project will come up again later with more detail about the buildings themselves.

“I think this is a good project,” said Commissioner David Hill. “This is a type of development that is good for downtown in this specific area. I hope to see more of it.”

Commissioner Holly Streeter-Schaefer expressed concerns about the height of the taller buildings.