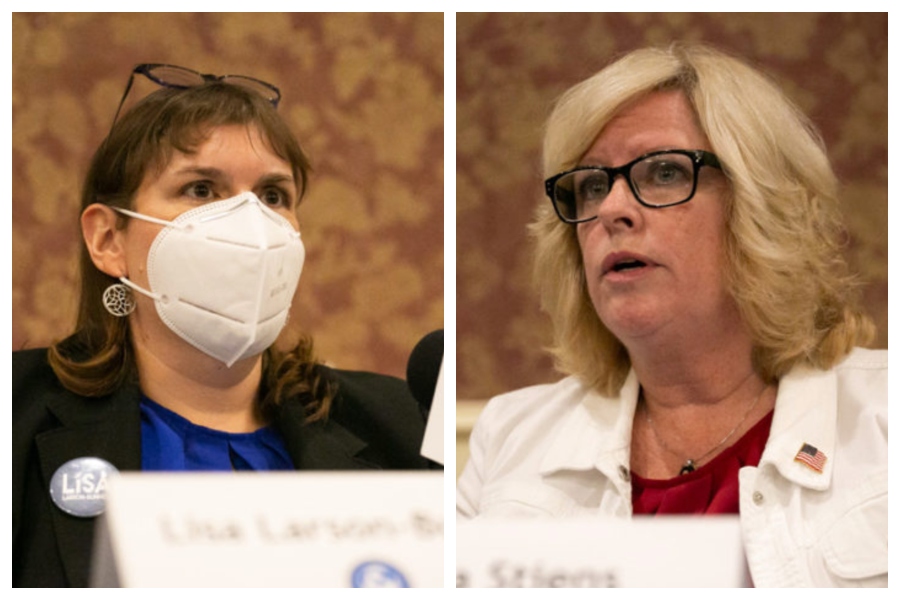 A final addition of some provisional ballots cast on Election Day did not change any projected winners in a handful of close races from Johnson County's Nov. 2 election. That includes the contest for a Shawnee City Council seat, where the final count showed challenger Angela Stiens, right, holding her lead over incumbent Councilmember Lisa Larson-Bunnell, left. File image.

A final count of provisional ballots on Tuesday did not result in any changes in the winners of a handful of city and school board elections in Johnson County that had been considered too close to call after the Nov. 2 general election.

Vote margins fore three city council wards and two school board seats were as narrow as 36 to 60 votes.

But in most cases, the final count certified Tuesday by the Board of County Canvassers only increased the margin a bit, leaving the projected winners unchanged.

Here are the outcomes of the closest races:

The margin in the Overland Park mayor’s race also stayed roughly the same on Tuesday, with Curt Skoog at 20,243 and Mike Czinege at 19,530.

Skoog will be sworn in as mayor in early December, along with six newly elected councilmembers.

The only surprises on Tuesday were in relatively low-profile races for an at-large seat on the Lake Quivira Council and the Monticello Drainage District Director.

Election Commissioner Fred Sherman announced the write-in winner for one of the Lake Quivira positions to be Joe P. Walsh with 25 votes.

The drainage district had an eight-way write-in tie, so candidates’ names were put on folded pieces of paper and drawn from a bowl by Commissioner Jeff Meyers.

The names of Peter Jones and Robert Knight were drawn.

The actions Tuesday put a final decision on which problematic ballots cast on Election Day should be counted and which should not.

The board decided to count 797 ballots that had minor problems, like the lack of a signature or ID.

Another 187 ballots with more serious problems, like a lack of voter registration or a mailed ballot that was postmarked or arrived too late, were not counted.

And 203 ballots where the voter came to the wrong polling place and could not vote on all of the races were partially counted.

Candidates have until the end of Wednesday to ask for a recount.