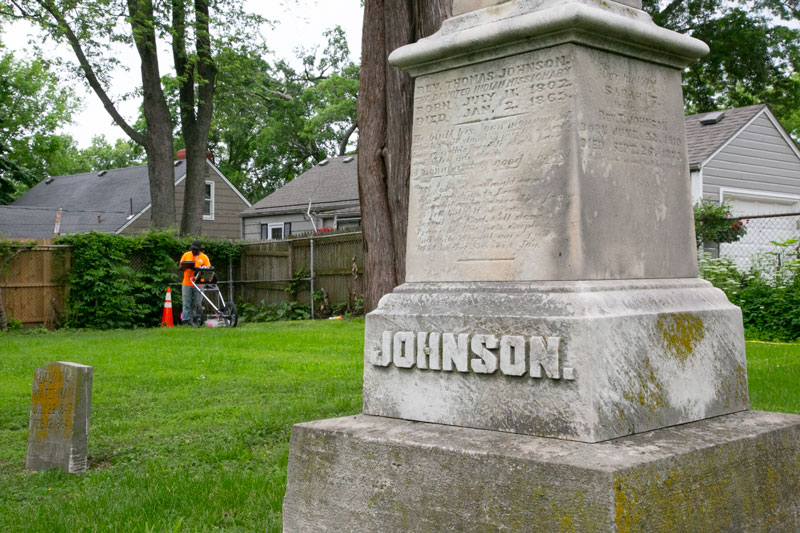 Rev. Thomas Johnson, the county's namesake, is buried in a small cemetery off Shawnee Mission Parkway in Fairway. In his life, Johnson owned slaves and advocated for the Kansas Territory to enter the Union as a slave state. Ultimately, he changed some of his views and sided with the Union during the Civil War, but a recent proposal before the county's Charter Commission sought to begin a discussion to consider changing the county's name due to Johnson's past. File image.

The Johnson County Charter Commission will not consider a proposal to begin a discussion about whether the county should be named after a former slave owner following a commission member’s decision to withdrew the recommendation.

Tedrick Housh, who submitted the recommendation to “adopt a process of meaningful consideration” for changing Johnson County’s name, said over the weekend that the Charter Commission might not be the best venue for that.

“It is an important discussion but upon reflection, I think the better approach is to address this matter with the (County Commission) and the community directly, outside the Charter Commission platform,” Housh told the Post.

The Charter Commission is a body that convenes once a decade to review the county’s home rule charter and is completely separate from the Board of County Commissioners.

Housh, a Kansas City area lawyer, is one of 25 members appointed to the Charter Commission.

His idea to consider a name change was one of 18 amendments and recommendations to county governance the Charter Commission is set to take up, beginning at a meeting Monday afternoon.

Housh told the Post over the weekend he was not pressured into withdrawing his proposal.

“Once I looked at the amendments we had before us and everything we had going on, this just didn’t seem to be the right place or fit to take this up,” he said. “It was my own solo decision.”

Housh’s name, like all other Charter Commission members who wrote amendments and recommendations to the commission, had been redacted. But he reached out to the Post after making his decision to withdraw it.

In his recommendation, Housh cited the background of the Rev. Thomas Johnson, the county’s namesake.

Johnson was part of a pro-slavery group that attempted to bring Kansas into the union as a slave state. He also owned slaves himself while he helped found the Shawnee Methodist Mission and Indian Manual Labor School in present-day Fairway.

Housh’s recommendation centers on Johnson’s history as a slaveowner and did not cite controversies over other such mission schools.

Native American boarding schools, which were designed to replace indigenous peoples’ culture with White Christianity, are under renewed scrutiny in both the U.S. and Canada because of evidence of abuse of the children in some.

Recently, Shawnee Tribe Chief Ben Barnes called on federal and local officials to look deeper into the Shawnee Indian Mission’s history and see if there are burials of children there.

But Housh’s recommendation asks the the Board of County Commissioners to consider whether Johnson’s background as a slave owner and advocate for slavery meshes with the county’s values.

It also points out Johnson County, Iowa, earlier this year changed its namesake from that of a different former slave owner to Lulu Merle Johnson, daughter of an enslaved man and the first African-American woman to earn a doctorate in history.

That county’s decision was “moving and inspiring,” Housh wrote in his recommendation.

Housh’s proposal would have only been a recommendation, not an amendment to what is basically the county constitution. As such, it would have gone to the county commission for consideration anyway.

Housh said he’s glad that the issue got some attention and hopes to bring it to the county commission in the future. But first, he wants to talk to some other community members and get other opinions.

He says he’s already reached out to the Johnson County NAACP.

Most importantly, he said, a serious discussion needs to be had, regardless of whether the county is ultimately renamed.

“It’s an important discussion and the community needs to have it in a reasoned, thoughtful way — not through flaming social media posts,” he said.

Housh said a recent trip to the Johnson County Arts and Heritage Center in order to vote got him thinking about the county’s name.

A plaque at the entrance to the parking lot tells a lengthy history of the county. The part about Johnson only mentions the mission and labor school.

“I didn’t think that did justice to the full measure of his legacy,” Housh said.

He added that he was surprised that the county was named for Johnson after Kansas had been established as a free state.

The Charter Commission will begin discussing other amendments and recommendations at its meeting today at 4 p.m. in the County administration building in Olathe.

The commission has already drawn some attention this year from residents convinced there would be an amendment to make the sheriff’s office appointed rather than elected.

That amendment never materialized and is not included in the 17 remaining ideas the commission will discuss.

The full list of proposals and more information about the commission can be read here.

Correction: An earlier version of this story said Monday’s meeting of the Charter Commission is a public hearing. Though open to the public, the meeting is not expected to take public comment.