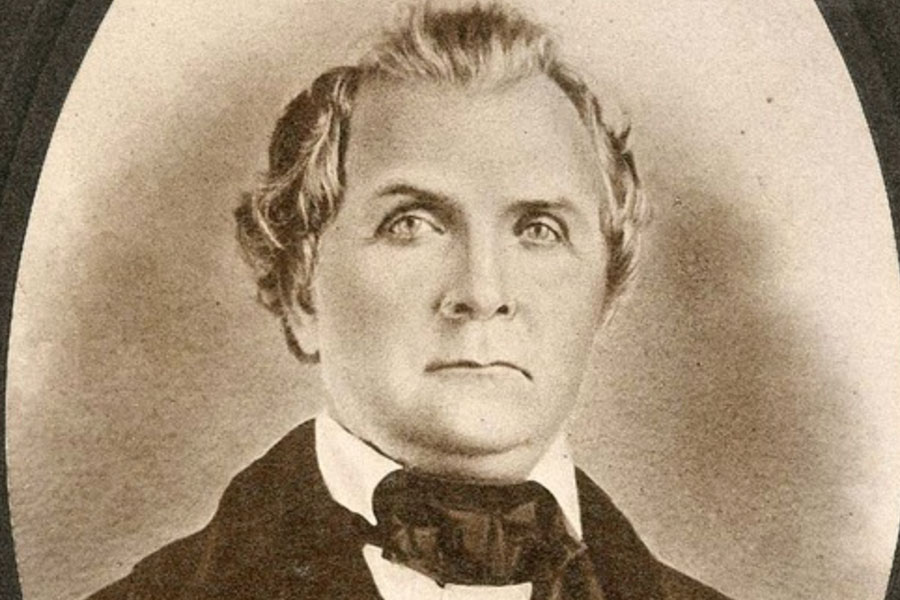 Rev. Thomas Johnson, the county's namesake, was a pro-slavery advocate and leader of the “Bogus Legislature” that sought to install Kansas as a slave state before the Civil War. One of 18 proposals submitted by Charter Commission members seeks to have the Board of County Commissioners "adopt a meaningful process" for potentially changing the county's name. Image via Kansas Historical Society.

A recommendation to consider whether Johnson County should be named after its slave owning namesake is among 18 suggested changes that have been submitted by members of the county Charter Commission for its consideration.

The Charter Commission is convened once a decade to review the county’s home rule charter and is separate from the Board of County Commissioners, which manages the day-to-day functioning of the county.

The list of amendments and recommendations now before the Charter Commission includes some ideas about which county races should be partisan and which should be elected — subjects that have proved controversial among people who have attended the charter commission’s recent public hearings.

The name change item doesn’t call for a name change outright but seeks to have the Board of County Commissioners “adopt a process for meaningful consideration of Rev. Thomas Johnson as the namesake of Johnson County.”

The text of the recommendation cites the history of Thomas Johnson, who in 1855 was a pro-slavery advocate and leader of the “Bogus Legislature” seeking to install Kansas as a slave state.

The next year, he bought a 15-year-old enslaved girl named Martha and was said to have owned slaves while helping operate the Shawnee Indian Mission that he helped found.

The name of the charter commissioner who submitted the idea is redacted, as are the names of all the other proposal submitters.

But the submitter wrote that Johnson’s actions “do not embody the values, ideals and love of freedom of the people of Johnson County.”

“Given that the Charter Commission convenes but once a decade, we should not wait to urge the consideration of Reverend Johnson’s place in our county’s legacy,” the proposal ends.

The submission also notes that Johnson County, Iowa, recently changed its name for a similar reason. In that case, the name of the county stayed Johnson – it was the namesake that changed.

Johnson County, Iowa, was originally named for former U.S. Vice President Richard Johnson, a slave owner. This summer, county supervisors there unanimously changed the namesake to Lulu Merle Johnson, daughter of a formerly enslaved man and the first African-American woman to earn a doctorate in history.

How the proposals will be handled going forward

In total, the Charter Commission will consider 18 items submitted by commissioners: 15 amendments and three recommendations.

Amendments, if approved by the Charter Commission, would then have to win approval of residents through a countywide vote.

Recommendations, on the other hand, if approved by the Charter Commission, would be forwarded to the Board of County Commissioners, which could enact a change without voter approval.

The proposal to consider changing Johnson County’s name is one of the recommendations.

Other items up for consideration

The name change is but one of a number of potentially factious items to be considered by the 25-member Charter Commission.

None of the 18 proposals suggest the sheriff become an appointed position, the idea that prompted vehement public comment at commission hearings earlier this summer.

But the sheriff’s office does crop up in some of the proposals.

There is one amendment that suggests the sheriff be elected in a nonpartisan election and another that adds the DA to that idea, along with an additional rule that both offices be subject to the county’s personnel policies and that the county manager appoint non-elected department heads.

The commissioner or commissioners that submitted that idea wrote that the sheriff and district attorney should not be seen as serving a particular party ideology.

The flip side of that was a different amendment calling for the clerk, register of deeds and treasurer to be elected to bring the county into agreement with other large Kansas counties that do the same.

A separate amendment wanted the same for the county appraiser, saying it would make that office accountable to the voters.

Yet another amendment proposes that all county elections be partisan.

Several speakers at the public hearings asked the commission to make the county public health director an elected job. But none of the commissioners submitted that idea.

However, there was one proposal to create a public health and safety governing board to provide oversight for the sheriff and health director.

Another proposal suggested the county commission create a Health Advisory Council for guidance when it sits as the board of public health.

One amendment was proposed as a correction on a perceived imbalance of power between commissioner districts. That change would make the county commission chairman, currently a four-year term, into a five-year term.

As things now stand, three county commission spots are up for re-election at the same time as the race for chairman. That makes it less likely that someone would run for chairmanship from those districts, the writer said. The three not running in the same year as the chairman are in the southern and western parts of the county.

Heated discussion prior to proposals

The Charter Commission, a body convened once every decade to discuss details of the county’s home rule, has been meeting for weeks.

Much of the charter commission’s time so far has been educational as various officials and department heads have testified to commissioners about how the business of the county is done.

Two recent meetings were devoted to hearing from the public, which got heated over the suggestion that the commission consider making the sheriff’s office an appointed, rather than an elected, position.

Some public comments grew heated and one hearing in September was adjourned almost immediately after it began because a large, boisterous crowd exceeded the space’s COVID-19 safety limits.

This week was the deadline for changes submitted by charter commission members, who will begin their discussions Nov. 8.

Consideration will begin with the amendments before considering “recommendations,” items that include changing the county’s name.

The next Charter Commission meeting is at 4 p.m. on Monday, Nov. 8 at the county administration building, 111 S. Cherry Street, Olathe. The full list of proposals and more information about the commission can be read here.