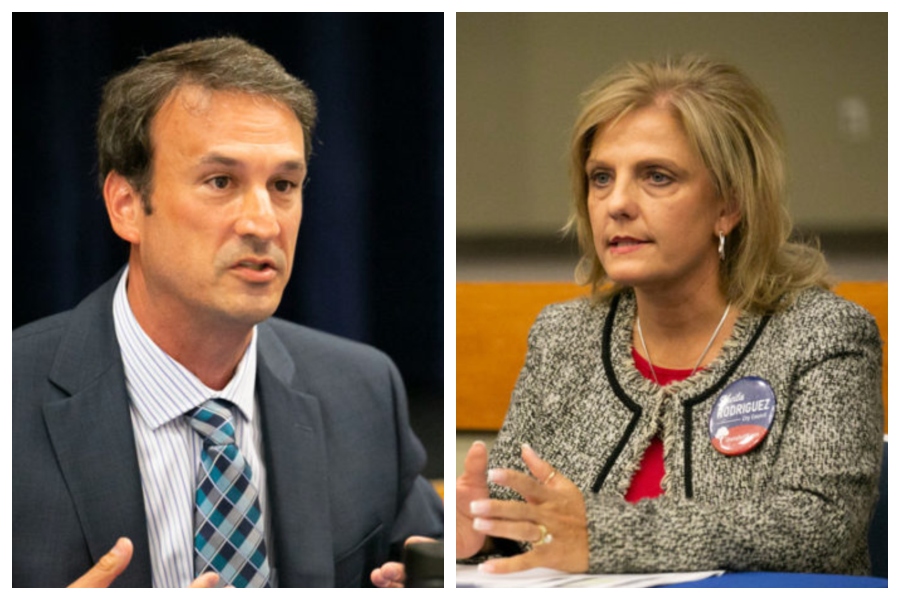 In the race for Overland Park City Council in Ward 5, Sam Passer (left) leads Sheila Rodriguez by 41 votes after the Johnson County Election Office's Friday update. The Board of County Canvassers will meet Tuesday, Nov. 9 to officially certify the results of all races in Johnson County. File images.

On Friday afternoon, the Johnson County Election Office released its final update to the unofficial vote counts from Tuesday’s election ahead of next week’s canvass.

The canvass on Tuesday, Nov. 9 will formally certify the election’s results.

A handful of races for municipal offices in Johnson County remain close, with some margins gradually tightening over the past three days as the election office has released daily updates.

But no races in the Post’s coverage area saw the order of how the candidates finished on Tuesday flip in the intervening three days.

These updates have taken into account the addition of mail-in ballots that were delivered or postmarked before 7 p.m. on Election Day and received by Friday, according to Nathan Carter, a spokesperson with the Johnson County Election Office.

This might not be the final time vote counts change before final certification on Tuesday.

Provisional ballots cast on Election Day will be reviewed by the Board of County Canvassers during the canvass and could be added to some races’ totals, altering these current unofficial results further.

Here are the races in the Post’s coverage area with the slimmest margins after Friday’s update.

After Friday’s update, Sam Passer leads Sheila Rodriguez by 41 votes out of more than 5,900 cast. Passer led by 44 votes on Tuesday but his margin had slimmed to 27 votes following Wednesday’s update.

After Thursday’s update, he also led by 41 votes, so this race was not impacted by Friday’s numbers.

Going into the official canvass, the margin between these two candidates is slightly less than 0.7%. 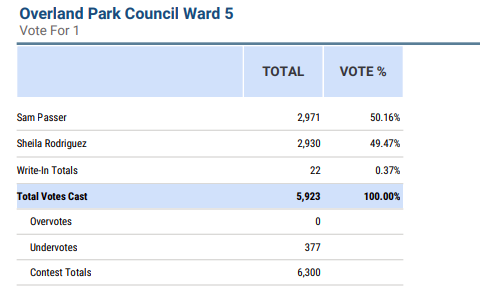 After Friday’s update, Angela Stiens still leads incumbent Councilmember Lisa Larson-Bunnell by 39 votes out of more than 3,920 cast. This was the same margin Stiens led by after Thursday’s update.

Stiens led by 67 on Tuesday and led by 42 after Wednesday’s update.

As of Friday, the candidates were separated by a margin slightly less than 1%. 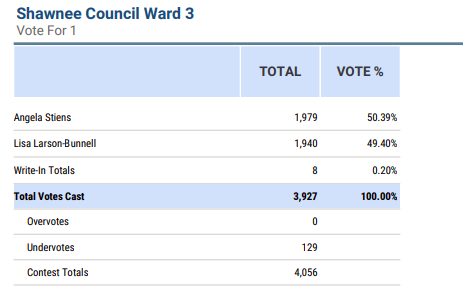 After Friday’s update, Melanie Arroyo maintained a lead over incumbent Councilmember Corey Hunt of 60 votes out of more than 2,550 cast. Arroyo led by 53 votes on Tuesday, by 54 votes after Wednesday’s update and by her current 60-vote margin after Thursday’s update, as well.

As of Friday, Arroyo leads Hunt by slightly more than 2.3%. 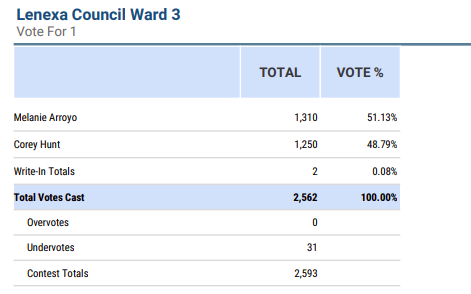 Blue Valley Board of Education Member 6

After Friday’s update, Jim McMullen leads Lindsay Weiss by 48 votes out of more than 27,250 cast.

This race has steadily narrowed all week. McMullen led by 165 votes on Tuesday, by 80 votes following Wednesday’s update and by 65 votes after Thursday’s update.

As of Friday, the two were separated by less than 0.2%. 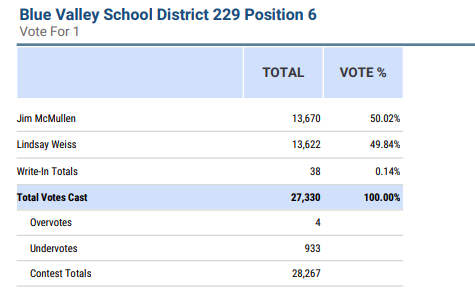 Other close races of note

In addition, a school board race in Olathe (outside the Post’s typical coverage area) saw the candidates flip places after mail-in ballots were added Wednesday.

And after Friday’s update in that race, Julie Steele’s lead over Jennifer Gilmore had expanded to 63 votes.

The Johnson County Board of County Canvassers meets on Tuesday, Nov. 9 to officially certify the election results.

At the canvass, the board will determine which provisional ballots to add to the final official count.

There are no automatic recounts in Kansas. Candidates must request one. Candidates will be reimbursed for the cost of a recount if their race ends within a 0.5% margin.