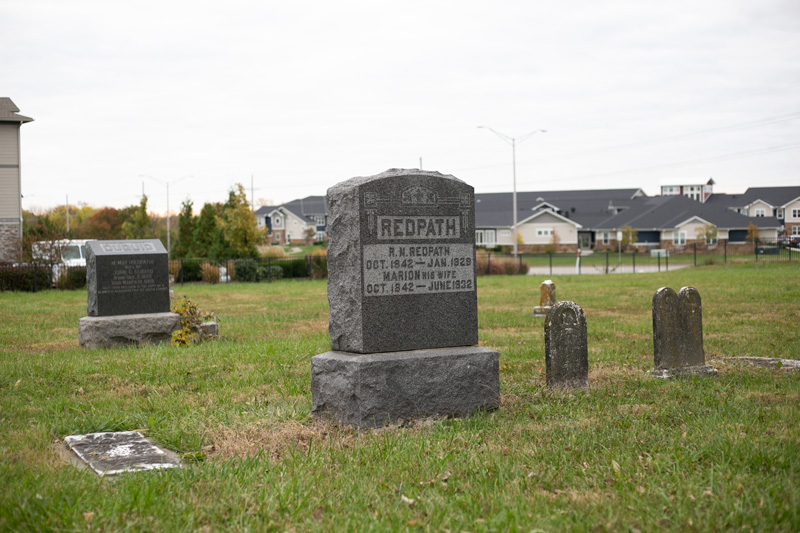 An Overland Park city council committee voted Wednesday to approve the filing of a "friendly" lawsuit that would allow the city to take ownership of Pleasant Ridge Cemetery on 135th Street. The owner and sole living board member of the privately-run cemetery is in ailing health, and his daughter approached the city about taking over the property. Photo credit Leah Wankum.

The city of Overland Park may soon file a “friendly” lawsuit with the aim of taking over a small private cemetery at the owner’s request.

The city was approached by the daughter of James McKee, the owner and sole living board member of the privately-run Pleasant Ridge Cemetery, with a request for the city to take ownership of the property.

McKee’s daughter told city officials her father is in failing health, and there is no one else to assume care of the cemetery.

Located on a small plot of land at 12700 W. 135th Street, the cemetery sits on 0.7 acres and is surrounded by multi-story apartment buildings and condominiums.

Originally established in the 1860s, the last recorded interment at Pleasant Ridge took place in the 1960s.

According to this description from Digital Cemetery, there are 32 marked interments at Pleasant Ridge and indications of “many more” graves with missing headstones.

Under Kansas state law, a cemetery abandonment process typically consists of the Attorney General filing an action in district court to dissolve all title and liens on the property. Then, the cemetery’s title and remaining assets can be transferred to a city.

However, due to the age of Pleasant Ridge, the process for Overland Park to take possession and maintain the plot is a bit different.

After learning that the traditional abandonment process may not work, city staff approached McKee’s attorney with the idea to jointly file a “friendly” lawsuit that would, in essence, achieve the same result.

The city would sue McKee in order to take possession of the cemetery.

Stiles said it is imperative the city take the issue to court, even if not through the traditional abandonment process.

He said it would ensure that if the city obtains the property, it will do so with a clean title and will expunge any liens potentially on the property.

Another reason for the “friendly” lawsuit is that McKee, according to Stiles, has very little documentation of ownership of the cemetery or  documents of the previous cemetery board.

Therefore, the city is uncomfortable taking over the cemetery without going through the court process.

Though the committee members were seemingly in favor of taking ownership of Pleasant Ridge, some expressed concerns about the cemetery.

Councilmember and newly elected Mayor Curt Skoog questioned the burden that might be placed on city staff — particularly maintenance crews — if the city took ownership of the property.

Stiles told Skoog, “It is my understanding that at this point, since the cemetery is so old, it would mainly just be mowing the grass there.”

Overland Park would be in charge of taking care of other aspects of the cemetery, such as maintaining the tombstones, but, Stiles said he did not see costing much a time or money.

In the end, the approval to file the lawsuit passed with an unanimous vote from council.

Ultimately, Stiles said, though they have to go through a legal process, it is importance the city take claim of the property.

“If the city doesn’t take ownership of the cemetery, it’s expected the cemetery will become an ongoing public nuisance,” Stiles said.