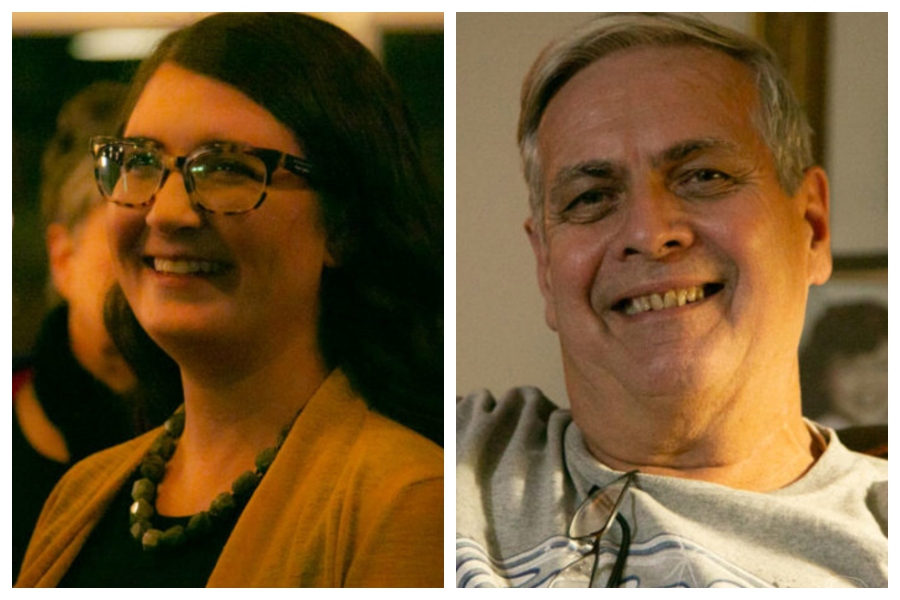 Contests on the ballot included mayoral races in Mission and Merriam.

Multiple city council seats were also up for grabs in Lenexa, Prairie Village and Shawnee.

And a slate of candidates vied for four seats on the Johnson County Community College Board of Trustees.

If your city or a race you’re interested in is not included in this recap, you can find full unofficial election results from all the communities the Post covers here.

And you can also read our recaps of the Overland Park mayor and city council results, as well as contests for local school boards.

Flora faced fellow Ward 2 Councilmember Arcie Rothrock, and won in a 65% to 34% vote.

Flora told the Post she thinks residents responded to her campaign’s door knocking efforts, which reached about 1,600 voters.

“Voters saw me doing the work and saw that I would do the work and could look to my council record and see what I’ve done,” Flora said. “[Voters saw that] we can keep moving Mission forward, keep Mission competitive and show everyone else it’s the palace to be.”

Rothrock told the Post she knows Flora will do well in this new position.

After seven years on the city council, Rothrock said she hopes to continue her efforts with community engagement — and she’ll still be involved with two city foundations including Mission Community Food Bank.

“I’m not going anywhere, and I will continue to do all of the good things that I did in all my years before,” Rothrock said.

As for the city council races, Lea Loudon in Ward 2 beat Keith Viken and Joe Donaway with 66% of the vote, according to unofficial final results.

In a brief emailed statement, Loudon it was an honor to be elected and now is “looking forward to getting together to work.”

Meanwhile, Ben Chociej beat Ray Ruecker for Flora’s Ward 4 seat with 67% of the vote, according to unofficial final results.

Chociej said in a press release he’s “excited and honored” to take the Ward 4 seat.

“Mission is at an important point in its timeline, and we are facing many exciting opportunities and noteworthy challenges,” Chociej said.

In his own statement, Ruecker congratulated Chociej on running a “fine race.”

“The citizens have spoken about the future of Mission, and it’s time to move forward,” Ruecker said.

Pape beat Angel Lopez III with 72% of the vote on Tuesday, according to Johnson County Election Office’s unofficial final results.

With 44 years of service to Merriam, between his time as fire chief and now as a current city councilmember, Pape said he thinks voters have confidence in his ability to lead the city moving forward.

“I think that they must be pleased with the way the city is going and the direction we’re moving, and that’s why I received the support I did,” Pape said. “We’re a great city and we’re just going to keep getting better. Hopefully, I will continue to serve them in a manner that they’ll be proud of.”

As it so happened, Pape was already technically mayor heading into Tuesday, after being temporarily sworn in Monday as interim following the official retirement of outgoing mayor Ken Sissom.

Pape said his priorities include the redevelopment of the former Kmart site at Shawnee Mission Parkway and Antioch Road, getting a grocery store within city limits and bringing downtown out of the floodplain.

Lopez did not immediately respond to requests for comment.

In the race for city council in Ward 2, residents elected Amy Rider with 60% of the vote, according to unofficial final results.

Hunt told the Post he was not yet conceding the race and would wait for the formal canvass on Nov. 9.

For her part, Arroyo said she was proud to potentially be the first Latina to ever be elected to a Lenexa City Council seat.

“I am looking forward to representing residents of Lenexa from all backgrounds” she said Tuesday. “I’m deeply grateful to everyone who believed in my campaign. I will lead and represent Lenexa with empathy, dignity, and respect.”

In a contested race for Ward 4, one-time Shawnee Mission school board member Craig Denny defeated Scott Callaway with nearly 58% of the vote, compared to Callaway’s 41%.

“I am humbled to be able to serve Lenexa residents as their Ward 4 Councilmember,” Denny said in a brief emailed statement Tuesday.

In Ward 1, Cole Robinson beat Thorne Daimler by a margin of 67% to 33%, according to Tuesday’s unofficial final tally.

Robinson will take over the seat being vacated by outgoing councilmember Jori Nelson, who endorsed Robinson during the campaign.

In Ward 4, Dave Robinson beat Jessica Priestland with 62% of the vote, compared to Priestland’s 37%.

Robinson is Cole Robinson’s father and says his son first alerted him to the open seat, which is currently held by outgoing councilmember Sheila Myers.

“It is an honor and privilege to be elected to serve on the Prairie Village City Council,” Dave Robinson said via email Tuesday. “I have truly enjoyed being part of our democratic process along with the opportunity to meet so many new people and hearing what issues today are important to them.”

In Ward 5, Greg Shelton earned 57% of the vote, beating out John Beeder, who garnered nearly 43% of the unofficial final tally.

Shelton will take over the seat being vacated by Councilmember Dan Runion.

He made environmental sustainability and responding to the impacts of climate change a central part of his campaign.

“I’m looking forward to working with Mayor [Eric] Mikkelson and my fellow councilmembers as we aim to maximize the value of our tax dollars by investing in services and infrastructure that will continue to make Prairie Village one of the most coveted places to call home,” Shelton wrote to the Post via email on Election Night.

In Shawnee, voters decided four city council seats, comprising half the membership of a body that has been riven by factionalism and in-fighting in recent years.

Tuesday’s unofficial results favored candidates who, in general, called for lowering taxes, cutting spending and putting more guardrails on the use of tax incentives for development.

As of Wednesday, the race in Ward 3 remained close enough that incumbent councilmember Lisa Larson-Bunnell, who currently trails challenger Angela Steins by 67 votes, said she would wait until the official canvass next week to see if she should concede.

“Given the record turnout and the number of mail ballots yet to be counted, as well as provisional ballots, we are going to have to wait a few more days until we have final results,” Larson-Bunnell told the Post on Tuesday night.

Stiens did not immediately respond to a request for comment.

Meanwhile, in Ward 1, Tony Gillette defeated Sophia Theodore by a margin of 57% to 42% and will take over the seat being vacated by Councilmember Matt Zimmerman.

In Ward 2, incumbent Councilmember Mike Kemmling fended off a challenge from Eric Persson, winning by a margin of 56% to 44%.

And in Ward 4, Jacklynn Walters defeated Kevin Makalous, 54% to 46%, to take the seat being vacated by Councilmember Lindsay Constance.

“I am incredibly grateful for the support of the voters of Ward 4 for trusting me with their support and I look forward to being their voice on the Shawnee City Council,” Walters said.

Makalous said he remained proud of his campaign despite the disappointment of losing.

“I continue to believe that Shawnee is better when we’re united and not divided,” he said. “I hope Mrs. Walters’ focuses on healing the hurts of the failed community center and working to bring all of us together — as I still believe that’s what’s best for moving Shawnee into the future.”

Voters sent four candidates, including one incumbent, to the Johnson County Community College Board of Trustees on Tuesday night.

The election hinged, in part, on discussions about JCCC’s declining student enrollment and the college’s budget.

In a field of nine candidates, accountant Mark Hamill was the top vote-getter, garnering slightly more than 15% of the vote.

He critiqued what he called the “mismanagement” of JCCC’s budget and the college’s increased spending over the past decade. He also said he would not have supported the college’s rule that masks be worn in most indoor spaces on campus this fall.

Hamill did not immediately respond to the Post’s request for comment on Tuesday.

The three candidates that followed him also earned spots on the board.

Rattan noted Tuesday night that she is the first Black person elected to the board of trustees.

“This is the cultural center of our county, and I intend to honor it and make it the best it can be. I look forward to working with the administration, the faculty, the students, and the 6 other Trustees,” she said.

“I’m proud to have run a nonpartisan campaign that focused on my community involvement and leadership, and I highlighted the strengths and challenges at the College,” he said.