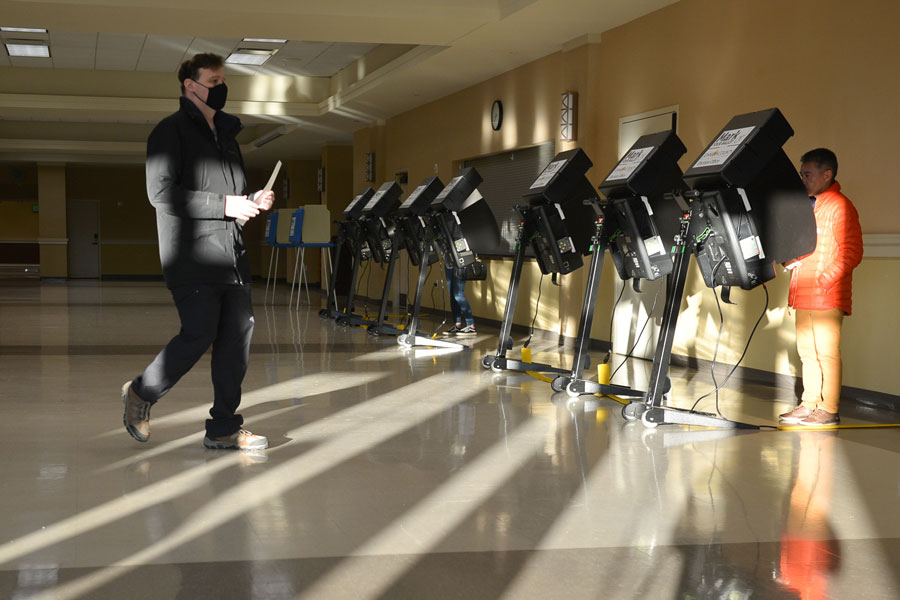 There were six contested races for Overland Park City Council in 2021, a seat in each of the city’s wards making up half of the total council.

Four incumbents, overall, were on the ballot. Two ended up retaining their seats, while two others were defeated. Meanwhile, two newcomers won competitions for open seats.

Here is a breakdown of the results.

With 63% of the vote, incumbent councilmember Logan Heley won a second term for the Ward 1 seat, beating Ryan Spencer, who got 37%.

“We had amazing turnout in this election for what a municipal election normally looks like, and I’m just honored to have the support of my constituents to serve another four years,” Heley said.

Once seated in a new term, Heley said he plans to focus on housing affordability, sustainable infrastructure and climate change, which were some of the items he campaigned about during this election season.

Spencer offered his congratulations to Heley on Election Night.

“Obviously, it’s disappointing because you put that much time and effort into it, but it was my first foray into politics, and going up against an incumbent in a fairly blue part of Overland Park, it’s not completely unexpected,” Spencer said.

Spencer noted his appreciation and pride for the volunteers who helped him on his campaign.

He also said he hopes to see the issues he raised during his campaign being brought to the Overland Park City Council’s attention in the next few years.

In the race for the Ward 2 seat, Melissa Cheatham beat Roger Tarbutton.

Cheatham took home 62% of the votes, while Tarbutton won 38%.

Cheatham shared her excitement for the results.

“I’m just really proud of the campaign we’ve run,” Cheatham said. “I had counted it up, and we had over a hundred people who volunteered on this campaign. So this was grassroots from the start, about friends and neighbors and folks who I had worked with coming together to keep Overland Park a really strong community, a great place to live for families and all kinds of people. And together, we did it.”

Incumbent Jim Kite won a third term in Ward 3, taking home 52% of the votes and beating challenger Amanda Vega-Mavec, who got 47% of the votes.

Kite shared his excitement for a new term and expressed his gratitude for his wife, Wendy, who knocked on hundreds of doors to get her husband re-elected.

“I’m just elated I won. We did everything we could,” Kite said. “There was a whole lot of partisanship in every race, not just mine. That was a hurdle for all of us. In Overland Park, we’re not used to partisan races. And it was a whole new dynamic, which created more work and more expense. We had to work harder and spend money.”

Once seated in his new term, Kite said he plans to focus on economic growth and “building a new coalition,” similar to what he said Mayor Carl Gerlach did over the past decade.

“We’re going to have to redefine how we work together because there’s a potential for divisiveness,” Kite said. “I need to help [newly elected Mayor] Curt (Skoog) build a new coalition going forward.”

Vega-Mavec expressed a positive attitude toward the results, particularly because they were so close and up against an incumbent.

“I may not have won the race, but I won in so many ways,” Vega-Mavec said. “For somebody who said to me in his conversation with me, ‘Well, now I have to campaign,’ I think I won, no matter what, in many ways.

“This is the closest race for this ward in a really, really, really long time, and honestly, no matter what, I still feel like our campaign was incredibly successful tonight, and I wish Jim Kite well.”

For the Ward 4 seat, Scott Mosher won with 52% of the votes, beating out incumbent Stacie Gram, who was appointed to council in May of 2020.

With less than 350 votes dividing the two, Mosher — the father of Overland Park Police Officer Mike Mosher, who was killed during a traffic stop last year — said he was overwhelmed with the results, but excited.

“My main focus is to take what the residents want and balance that with the needs of the City,” Mosher said.

Gram said though she is disappointed by the results, she is proud of the service she rendered for the city and all the work she has done for Overland Park.

After Tuesday, Sam Passer led in the race for an open Ward 5 seat, topping Sheila Rodriguez.

Passer said he found the unofficial results encouraging, however, he is cautious about becoming too excited due to the small margin of difference between him and Rodriguez.

“I’m not in this to make radical changes,” Passer said in reference to future plans he has if seated on council. “I think Overland Park is an amazing place, and I just want to continue that great legacy.”

Rodriguez said she had reached out to Passer on Tuesday night to offer her congratulations.

“I suspected it was going to be a close race,” she wrote the Post in an email. “If the official results do not reflect a different outcome, I’ll look forward to supporting Sam and the other councilmembers any way I can. My passion for preserving what makes Overland Park amazing isn’t any less today than it was yesterday. It just means this wasn’t the role I was meant to serve in and I’m excited about exploring other options in order to continue making a difference.”

With 51% of the votes, Jeff Cox took home the seat for Ward 6 against incumbent Chris Newlin.

Newlin has served on council since 2017 and was beat out by Cox by a little more than 200 votes.

“I’m happy to serve and will serve as I promised to represent the word six residents and voters,” Cox said.

Once seated, Cox said he plans to turn his focus to density within his ward as more multi-family developments pop-up in the area.

Newlin said he was saddened to see the results after serving on council for four years.
“I gave it my all for four years, so it kind of hurts that that was lost on the community, but that’s okay,” Newlin said.