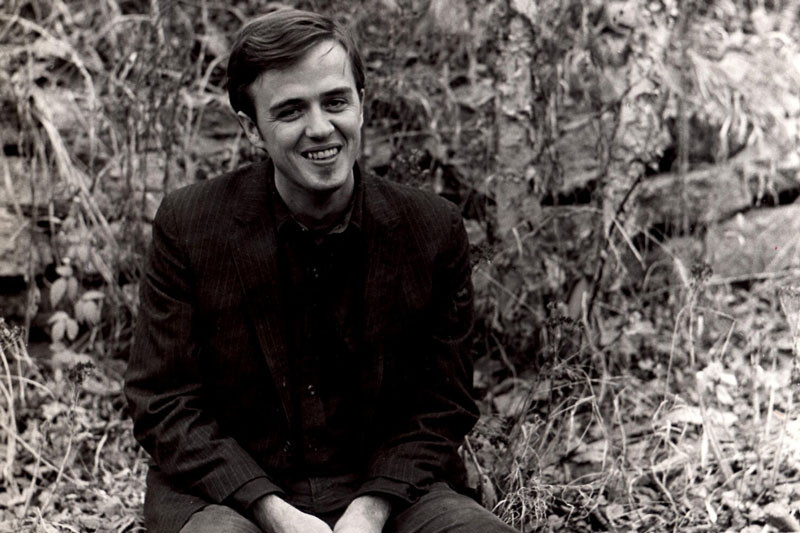 The Shawnee Mission East class of 1961 gifted the entire work of alumnus, poet and Pulitzer Prize winner James Tate, above, to the school as their class gift on their 60th class reunion. Above, a portrait of Tate in the 1960s, when he was just beginning his publishing career. He died in 2015. Photo via www.jamestate.net

A couple of years ago, as their 60th high school reunion approached, some members of the Shawnee Mission East Class of 1961 began wondering whether or not they’d ever given their alma mater a class gift.

After realizing their remaining $55 balance from their 1961 class funds must’ve been used for something else, they began brainstorming.

Then, they remembered James Tate: a fellow ’61 graduate and the only individual Pulitzer Prize winner SM East has ever produced.

An obituary in The New York Times credited him with an “offhand style, ingenious wordplay and wild flights of surrealism [that] won him a devoted following.”

In his prolific career, Tate won a Pulitzer Prize and a National Book Award and published 18 full volumes of poetry and three works of prose.

Gary Gradinger, a fellow ’61 Lancer, said he and other class members decided to honor the school’s “excellent reputation” for English and creative writing by collecting Tate’s entire work and donating it to SM East.

Tate’s promise wasn’t totally evident during his time at SM East. He finished in the bottom 10% of the ’61 class, Gradinger said.

But he went on to college and found a passion for creative writing during his first year at Pittsburg State, which was then called Kansas State College.

After earning a bachelor’s degree, he won a spot in the illustrious Iowa Writers’ Workshop and published his first volume of poetry, “The Lost Pilot,” in 1967 to much acclaim.

That book was inspired, in part, by Tate’s father, who was killed while flying a bombing mission during Word War II.

He spent the next several decades steadily publishing poetry, while also teaching at several universities, including the University of California at Berkley and Columbia University.

He won the 1992 Pulitzer Prize for “Selected Poems,” which was made up of poems he had published in nine previous volumes. He won the 1994 National Book Award for “Worshipful Company of Fletchers.”

“You would expect a Pulitzer Prize winner to come from the top of the class, not the bottom of the class,” Gradinger said. “Quite honestly, Jim joked about that. He often mentioned about nearly flunking out of high school.”

Gradinger said after deciding on the gift, members of the class of ’61 quickly took to Google to find published copies of Tate’s entire catalog and began collecting volumes.

At the class’ 60th reunion on Oct. 16, current SM East principal Jason Peres accepted Tate’s life work on behalf of the Class of ’61.

Additionally, the class of ’61 is giving an annual $1,500 scholarship to SM East in Tate’s honor.

The scholarship will go to an outstanding creative writing student, Gradinger said.

Gradiner and others in the Class of ’61 felt Tate’s story — from never meeting his biological father who died in World WarII, to having one “gangster” stepfather and another abusive one, to his academic struggles in high school — was equally important to honor and share with their alma mater, Gradinger said.

“The whole story is such an inspiring story, we just felt it needed to be told and it needed to be, hopefully, an inspiration for generations of Lancers to come,” Gradinger said.