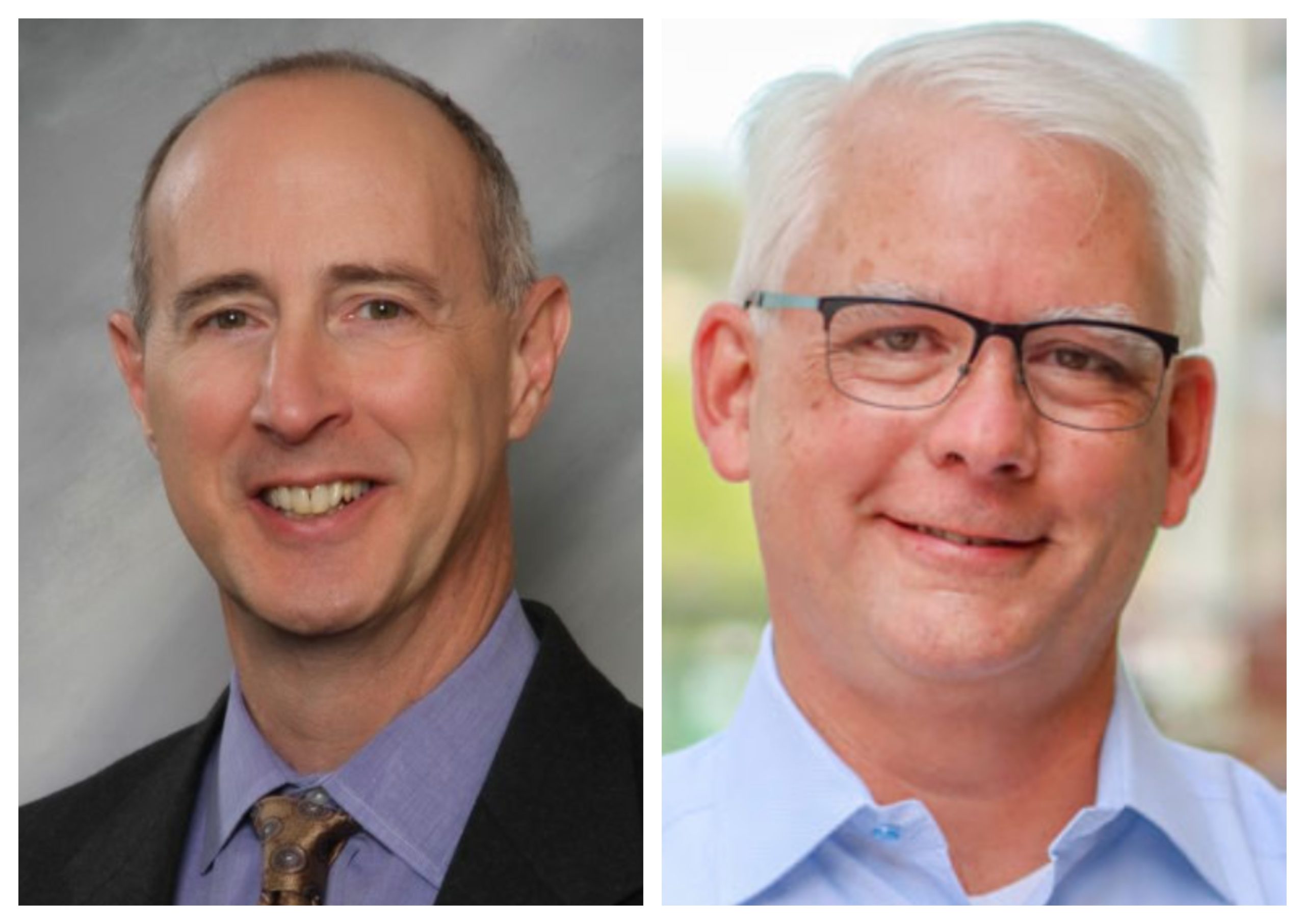 Mike Czinege, left, and Curt Skoog are running for Overland Park Mayor. Skoog has been a city councilmember since 2005, while Czinege is a political newcomer. The candidates are divided over whether business donations are talking over the interests of residents. File images courtesy campaigns.

On Tuesday, Overland Park will elect a new mayor for the first time in 16 years, after Carl Gerlach announced he would not run for re-election.

Skoog was first elected to City Council in 2005 and currently serves as council president. Czinege, a former AMC Theatres senior vice president, is running for his first political position. Both men have lived in Overland Park for over 20 years.

A Beacon analysis of the candidates’ July 2021 primary expenditure reports showed that while Skoog and Czinege raised similar amounts — $50,192 and $45,134, respectively — the contribution sources vary.

Skoog received more donations from limited liability companies and businesses than did Czinege.

Kansas is one of 28 states that permit corporate campaign contributions.

Clarkson is part of the team building the new terminal at Kansas City International Airport. Brooks McCord is Clarkson’s chief financial officer and also serves on Superior Asphalt’s board of directors.

​​The Kansas Campaign Finance Act allows for LLCs owned by the same person to each donate separately to a campaign, but the practice can draw ire from those who say it allows businesses to wield too much power in local elections.

“If you look at Skoog’s campaign finance reports, it reads like Yellow Pages for development companies,” Czinege said.

Debates over the future of development in Overland Park, and the role tax incentives should play, have dominated the race.

Czinege has said he would like to see fewer apartment complexes being approved and an end to rezoning of properties. Skoog has said that for Overland Park to continue to grow and thrive, it’s essential that city officials work with both residents and businesses.

“I think the biggest benefit to me is my opponent,” Skoog said. “My opponent has come out and said that he is against development and that he wants Overland Park to go back to the 1980s or 1960s. So if you believe Overland Park should move forward, I’m your only choice.” 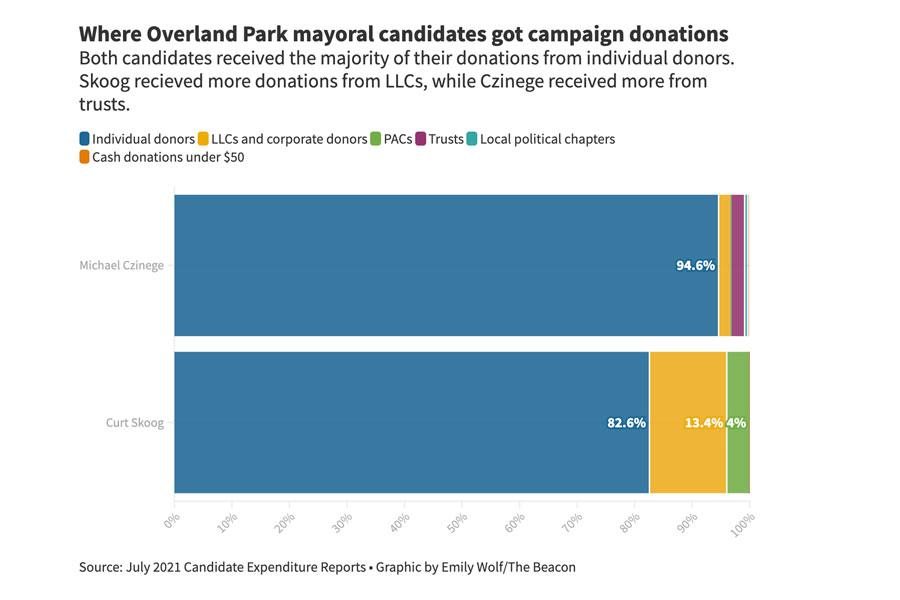 Czinege raised $950 from LLCs and corporate donors, including $500 from out-of-state PC Consulting LLC, according to his July campaign expenditure report for Overland Park mayor.

Czinege said he doesn’t think taking donations from LLCs and businesses is necessarily wrong, but when those donations make up the majority of a campaign, it becomes a problem.

“It’s not a one-time thing (for Skoog),” Czinege said. “Every election, the development community donates more to him.”

Both candidates saw the bulk of their donations come from Overland Park.

Czinege said his campaign made it a priority to go door-to-door and engage individually with residents.

“We knocked on 13,000 doors in the primary,” he said. “We’ve been talking to people, working to put the voice of the residents back in charge of city government.”

All but one of Czinege’s campaign events were hosted in the driveways of Overland Park homeowners, he said, where neighbors could organically interact with his campaign and learn more.

Czinege received money from seven donors who live outside of Kansas or Missouri — three from Texas, two from Ohio, one from North Carolina and one from Florida.

Skoog received money from eight donors who live outside of Kansas or Missouri — two from Oklahoma, one from Texas, one from Oregon, one from Wisconsin, one from Nebraska, one from Virginia and one from Illinois.

Familiar donors for both candidates

As a longtime elected official in Overland Park, Skoog has had years to develop a donation base.

Civil engineering firm BHC Rhodes donated to his 2014 commissioner campaign, his 2017 council campaign and his mayoral campaign this year.

He attributed the longtime support to businesses’ faith in his “ability to move the city forward. To make that happen, we have to have a partnership between the community, city and private investment.”

Emily Wolf is a local government accountability reporter with a focus on telling meaningful stories through data at The Kansas City Beacon. She is a Report for America corps member.