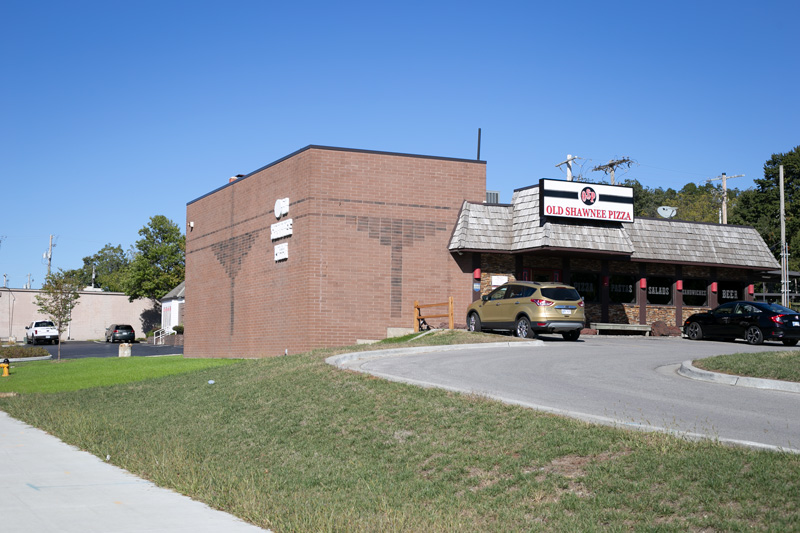 Construction prices have doubled during the COVID-19 pandemic, which is one reason why the owner of Old Shawnee Pizza says they are putting a project to build an outdoor seating area and patio on hold at its downtown Shawnee location. Above, the Shawnee location as viewed from Nieman Road. The proposed patio would adjoin the brick building where the brighter patch of greeen grass currently is.

Old Shawnee Pizza is taking a pause on its project to add an outdoor patio and seating area at its downtown Shawnee location.

Located at 6000 Roger Road, the popular, family-owned pizza joint had plans to expand as part of its plans to create a safer dining experience during the COVID-19 pandemic.

However, business owner William Walker said they decided to wait until construction costs come back down.

“The price of the project started getting kind of out of control for us,” Walker said. “Just pretty much kind of doubled the cost of when COVID-19 hit, so it just made things shoot up in price. So I really didn’t want to spend more than what I anticipated to spend on it.”

Walker said Old Shawnee Pizza had budgeted about $200,000 on the project, but costs of building materials and contracting services ended up pushing the price tag to as much as $500,000.

Plus, Walker said he had some difficulty finding contractors to take on a small patio job like this, particularly when contractors were already tied up in bigger projects.

“We just thought maybe it’s best to hold off and re-evaluate things and look at it again maybe in the spring or something and see how things are,” he added.

Walker said he is also unsure he would be able to staff up for an expansion.

Like many other businesses in the hospitality and service sectors, Old Shawnee Pizza has experienced a staffing shortage, particularly the daytime and weekend shifts, Walker Said.

He said he wants to make sure he first has enough employees to serve customers both in the dining area and on a patio.

Walker noted that he hasn’t seen anything like the recent staffing challenges. He said he can’t afford to offer some of the competitive wages and benefits that larger companies provide to attract new employees and simultaneously keep his prices reasonable.

He said he hopes customers will continue to show patience when dining out.

“There’s just nobody out there,” Walker said. “It’s a different world.”

By putting the project on hold, Old Shawnee Pizza also lost access to a forgivable loan from the city of Shawnee that would have helped pay for the project.

At that point, Old Shawnee Pizza had noted that project plans included an expanded seating capacity with the addition of the patio, plus a fire feature, awnings, built-in seating and some landscaping, according to city documents.

Old Shawnee Pizza could only receive the city money after completion of the project.

Walker said they may apply for the forgivable loan once they start back up with the project.

Julie Breithaupt, communications manager for the city, said Old Shawnee Pizza did not complete the project on time to meet the criteria for the SEED loan, although the city did grant an extension on the project timeline.

“We remain excited about the concept and will consider assisting if it goes forward in the future,” Breithaupt added.