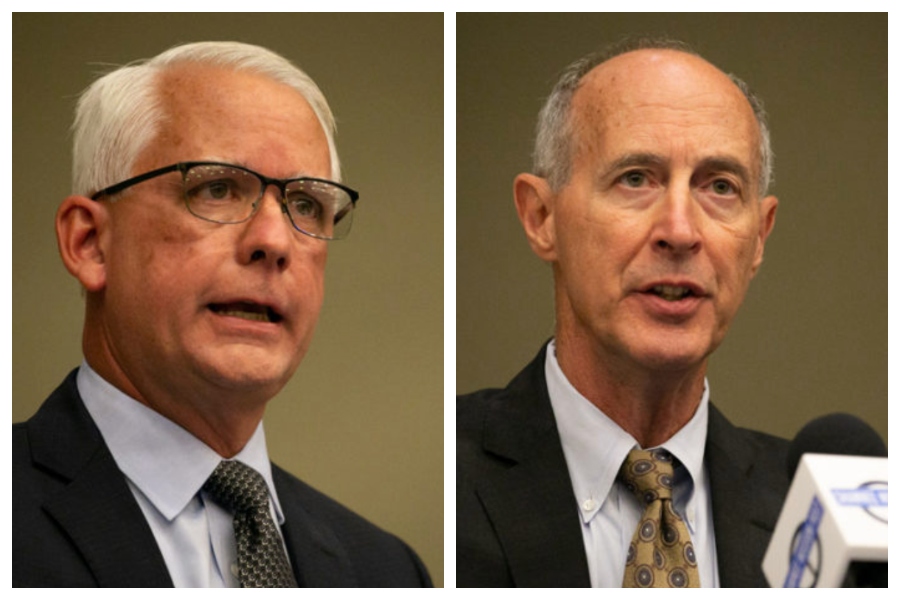 Beliefs about masks, COVID-19 vaccines and what is an appropriate government response to the pandemic have come to the forefront of the race for Overland Park mayor as the election enters its final days.

Though Johnson County cities have generally not been principal players in the region’s COVID-19 response, candidates Mike Czinege and Curt Skoog have found themselves answering questions on the subject with Election Day on Nov. 2 looming and advance voting already underway.

The topic was raised at a Shawnee Mission Post forum earlier this month and more recently at a debate between the men aired on KCPT.

Shortly after that televised encounter, Skoog’s campaign put out a press release that took issue with Czinege’s response about vaccines, calling on him to retract “medical misinformation” that Skoog called a “threat to public health.”

Czinege replied that the information he has presented has been thoroughly researched and there’s no need for a retraction. The Skoog campaign’s release, Czinege said, shows he doesn’t have the “intellectual curiosity” to examine more than one source of information on the coronavirus and its effects.

Only two cities — Prairie Village and Roeland Park — have imposed their own citywide mask rules since the rise of the Delta variant this summer. (Prairie Village’s will expire at the end of October. Roeland Park’s has been extended to mid-November.)

But that hasn’t stopped voters in Overland Park from asking the mayoral candidates about their stances on COVID-19, masks and vaccination.

Here is a quick rundown on how Skoog and Czinege stand on these issues.

It should be noted, both candidates say that as mayor, they would follow the recommendations of the county health department when it comes to the ongoing pandemic.

Czinege said he would be against requiring masks to be worn but also has no wish to outlaw them.

“My position from the beginning of the campaign, whenever asked about mask and vaccine mandates, has been that an individual has the right to make an informed decision based on their individual health risks,” he said. “I am not in favor of denying anyone the right to wear a mask or inject a vaccine. Again, it should be an individual choice.”

He has left open the question of masks’ effectiveness, noting the Spring Hill School District in southern Johnson County — the only public school district in the county that began the year without an universal mask rule — has seen its infection rates among students plummet since the start of September, when there was a notable spike in cases following a cheerleading event.

In early September, Spring Hill recorded a case rate five times the county-wide average, but in recent weeks, the district has had the lowest rate of any Johnson County public school district.

County health officials said earlier this month the district’s mitigation efforts, including social distancing, may be more effective because of its smaller population.

The Spring Hill district’s infection rate has often been mentioned by Skoog as well in public forums.

“I believe in science,” Skoog said during a Shawnee Mission Post forum on Oct. 5. “I will be following the advice (of the county health department) because we want to keep kids in school and keep businesses open.”

In an email exchange with Czinege in September, on which several media organizations were included, Skoog said he would support “reasonable measures” to protect the Overland Park community.

Skoog said he is vaccinated and has urged others publicly to get the vaccine.

Czinege said getting the vaccine should be an individual choice and has recommended each person do extensive research from a variety of sources on the subject before getting vaccinated.

Czinege said he has not been vaccinated, and that he and his family in Overland Park have all survived COVID-19.

He says he has been tested multiple times and also tested positive for COVID-19 antibodies which give him natural immunity.

In an email, he linked to data from the United Kingdom Health Security Agency’s Vaccine Surveillance Report, noting that data showed that infection rates are higher for vaccinated individuals than for those unvaccinated in people who are 30 and older.

That data covered the period from December 2020 to Oct. 10 of this year.

“The data on subsequent tables does show that hospitalizations and deaths are somewhat lower for the vaccinated,” he said in the email. “However, this does not diminish my argument for individual choice. The benefit to society should be a lower infection rate, and hence a lower rate of transmission to others.”

Elsewhere in the same report cited by Czinege, the authors said vaccines given in the UK have generally been effective and warned against misinterpretation of the data.

It was Czinege’s comments on the science and efficacy COVID-19 vaccines that prompted Skoog to accuse him of spreading misinformation.

In their KCPT debate, Czinege said, “The real science says those of us who have had COVID have natural immunities stronger and longer lasting than vaccination, and those of us who’ve had it, with natural immunity, have a two- to three- times higher percentage of incidence of problems from the vaccine. So why should I have to risk my life to take a vaccine if my physician says you have a higher risk of having a problem and you get no benefit from it?”

Skoog said statements like that undercut the work of the county health department in stemming outbreaks.

“As an elected official it’s my duty to responsibly communicate accurate information to the public. I believe that should extend to candidates for office as well,” he said.

Czinege later clarified that what he said on KCPT was in reference to the same UK data mentioned in his follow-up email to the Post.

There is some data from a different UK study, the Zoe Covid Symptom Study app, suggesting COVID-19 survivors are more likely to have mild adverse symptoms after receiving a shot. But those symptoms are mild and comparable to the second shot reactions some people have had, according to an explanation in the Pulse, a monthly news magazine distributed to doctors in the UK.

The CDC recommends vaccination for individuals who have had COVID-19 because, the agency says, there are still unanswered questions about how long natural immunity lasts.

The CDC also says recent research has shown the protection that comes from being vaccinated is proving stronger than natural immunity.

In a study conducted earlier this year Kentucky, unvaccinated individuals who had previously been infected were twice as likely to get reinfected than those who were fully vaccinated.

During the Post forum on Oct. 5, Czinege also alluded to health outcomes in Sweden noting that country kept its school open and there were “no sicknesses and no deaths.” He clarified later to say there were no deaths among 1.8 million school children.

Sweden’s approach to the pandemic has also been open to question after a letter from a Swedish researcher published in the New England Journal of Medicine in January suggested that deaths among children did not rise appreciably during the pandemic.

That claim was called into question after a private Swedish citizen obtained emails indicating there was “excess mortality,” during pandemic months.

Czinege said Skoog’s press release following their KCPT debate was an attempt to divert public attention from Skoog’s own record on “a topic he knows nothing about.” He added that he and his family, which includes scientists, look at multiple reliable, peer-reviewed sources and research extensively in making their health decisions.

“All he does is listen to what comes out of the (Centers for Disease Control). And the CDC has continued to change their position on a lot of things. That’s one of the reasons that you need to do your own research,” he said.

The CDC does recommend getting vaccinated against COVID-19, if you are eligible.

Skoog, for his part, pointed out that since last year, Johnson County health officials have been battling medical misinformation, in some instances spread by elected leaders, and that has made the job of issuing public health guidelines during the pandemic more difficult.