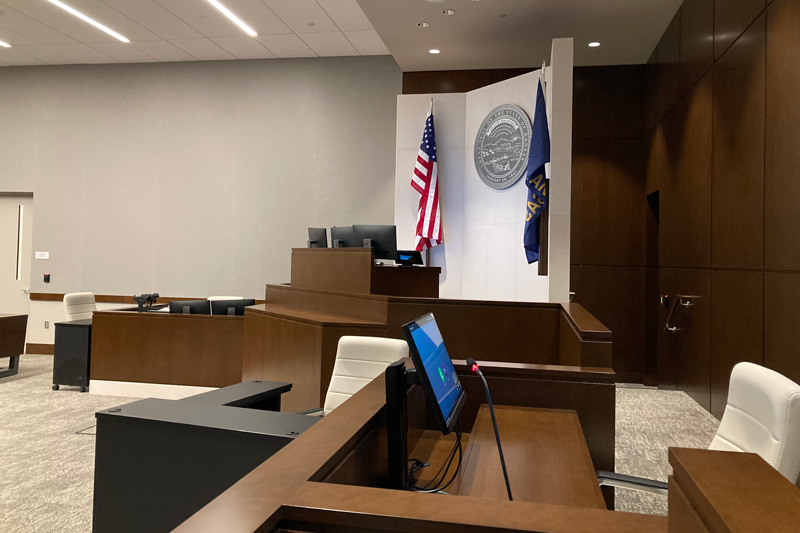 Prosecutors argued that a search warrant affidavit in the case of St. Thomas Aquinas choir instructor Joseph Heidesch be sealed from public view because releasing it "could jeopardize the physical, mental or emotional well-being of a victim, witness, confidential source or undercover agent." Above, an empty courtroom at the Johnson County Courthouse. File image.

Judge Michael Joyce on Monday granted prosecutors’ request that the record be blocked from public view.

Prosecutors argued, in part, that releasing the record “could jeopardize the physical, mental or emotional well-being of a victim, witness, confidential source or undercover agent, or cause the destruction of evidence.”

The search warrant affidavit would give an account of investigators’ probable cause for arresting Heidesch earlier this month.

The Kansas City Star reported the judge issued his order shortly after the court accidentally released it.

Heidesch, 45, of Shawnee is charged with two counts of sexual exploitation of a child, along with two additional counts of breach of privacy. All four are felonies.

Court documents allege that Heidesch used a concealed recording device to record two separate victims, one of them a teenager, in the nude or a state of undress without their permission.

Heidesch’s arrest was the result of an investigation by the Shawnee Police Department.

Since he was taken into custody on Oct. 7, Johnson County court records show there have been multiple requests for release of the search warrant affidavit.

Kansas state law does allow for exceptions to the release of criminal affidavits, including potential harm to victims or witnesses, as cited by prosecutors in Heidesch’s case.

Court records show Heidesch remains in the custody at the Johnson County Jail on $250,000 bond.

St. Thomas Aquinas’ president told students and families in an email after Heidesch’s arrest that he had been placed on administrative leave from the school pending the results of the police investigation.