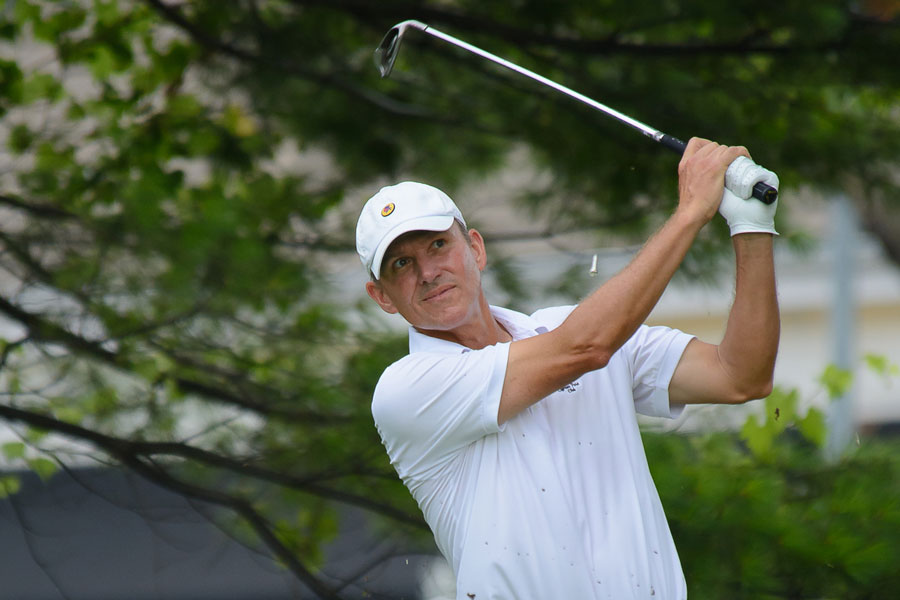 It would be easy to characterize the golf career of Mission Hills resident Bryan Norton as one peppered with near-misses.

But over the decades, spanning both before and after his current full-time job as an insurance salesman, Norton put together stellar credentials on some of the best courses in the world.

It’s been enough to now earn Norton a spot in the Kansas Golf Hall of Fame.

Norton will be honored at a Mission Hills Country Club dinner Wednesday night, one year after he was first notified of his induction. The ceremony was postponed last year due to the COVID-19 pandemic.

“I’ve done a lot of reflecting, especially just lately, because I know I’ve got to speak,” said Norton with a laugh. “It just makes me realize how fortunate I was growing up.”

Norton developed his game growing up in Salina, Kan.

He then took his game to another level at Oral Roberts University in Tulsa, Okla., where he came close to making the 1981 U.S. Walker Cup team, a collection of the top amateurs in the country who competed against the best from Great Britain and Ireland.

It was his first near miss.

He went on to qualify for four U.S. Opens, one of the biggest professional golf tournaments in the world, but missed the cut each time.

Still, he continued playing competitive golf as a professional through 1992 in the U.S. and overseas. In 1990, while playing on the European Tour, Norton finished tied for 31st at the British Open, the oldest professional golf tournament in the world, played that year on the hallowed course at St. Andrews in Scotland.

Balancing golf with a job, family

After calling it a career as a pro, he didn’t seriously compete again until joining Kansas City-based Lockton Insurance and was told his game “could open some doors.”

So he returned to competitive golf as an amateur while also balancing his game with a full-time job and raising a family.

Still, more career pinnacles were in the offing.

At the 2009 U.S. Senior Open in Carmel, Ind., Norton finished tied for 19th in 2009, but didn’t collect a dime because by then he had been reinstated to amateur status. His caddie that year, Overland Park banker Peter Shriver, called that finish the “best experience by far.”

As well as Norton played in that tournament, he wasn’t the best scoring amateur. If he had been, he would have automatically been given an exemption to play in the 2010 Senior Open.

“I was completely left out, and I didn’t qualify (for the U.S. Senior Open),” said Norton, who also happened to be the victim that year of a recent rule change paring down the number of exemptions given.

Norton did, however, qualify for two more U.S. Senior Opens in 2014 and 2015 with Shriver caddying for each.

“He’s done a lot of amazing things,” said Shriver who once wrote a letter on Norton’s behalf to the leaders of Augusta National, the famed course in Georgia where the Masters golf tournament is played each year.

Shriver’s appeal came when Norton was leading the USGA’s 2003 Mid-Amateur championship and was forced to concede because of a calf injury.

The winner of the tournament automatically received an exemption to play in the Masters the following year.

After Norton pulled out, Augusta denied Shriver’s appeal, preventing Norton from a chance to play in the same grouping as Arnold Palmer at the 2004 Masters.

During the final chapter of Norton’s golf career, his Kansas Golf Hall of Fame celebration may have been delayed by a year.

But no near-miss this time. Instead, a hole in one.